GLADIATOR and BRAVEHEART had a baby and they called it Russell Crowe. 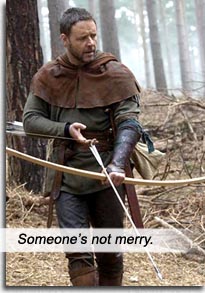 This ain’t Errol Flynn, this ain’t Adam Ant, and it’s certainly not Dennis Moore, Dennis Moore, riding through the woods… This ain’t your daddy’s ROBIN HOOD; no swinging from vines in the forest, no star-crossed lovers, no archery competition, no “splitting his competitor’s arrow in twain,” and no men in tights all haughty and gay. But it’s still 13th century Europe and everyone is still covered in poo.

In Ridley Scott‘s reimagined origin tale (is that a double negative or a faddish cliché?) Russell Crowe is Robin Longstride aka Robin of the Hood. (Y’know, if there was any more evidence we needed that “Robin Hood” is folklore and not fact, the hero’s name is a dead giveaway. How come his name was not “Cyril Doily” or “Tatum Mooby”? Longstride; yeah, we know what the spreaders of that myth had on their minds.) Longstride – snigger – is neither hero nor coward, merely a brawling archer in the service of British King Richard the Lionheart (Danny Huston, such a knack for these high and mighty roles).

After Richard is killed in battle, Robin sneaks back to England (now under tyrannical rule of Prince John) with his band of rootless archers, Will Scarlet (Scott Grimes), Alan A’Dayle (Alan Doyle) and Little John (towering Kevin Durand, wielding not Li’l John’s infamous quarterstaff, but a mallet that looks like Mjolnir).

Coming upon a dying king’s knight named Loxley (spelled “Locksley” in most Robin tales), Robin promises to return the knight’s sword to his father. Thus Robin pretends to be Loxley, and he and his men impersonate knights to gain passage on the ship back to England. All the nobles whisper suspiciously about Loxley looking a little less like the knight that left for the Crusades and a little more like Russell Crowe than is legally allowed.

Poffy of the Hood

Robin returns the sword (inscribed with, “Rise and rise again / Until lambs become lions”) to blind Sir Walter Loxley (Max von Sydow), and is smitten by Loxley’s daughter, Maid Marion (more like Madame Marion here, played by boiler Cate Blanchett). Old Loxley adopts Robin as his son as a ruse to retain his estate, but as it turns out, Robin’s actual insurrectionist warrior father forged that sword and Robin’s destiny lies somewhere between leading England against Prince John and Cate Blanchett’s thighs.

When petulant Prince John (Oscar Isaac) asks Robin sarcastically, “What would you have – a castle for every man?” Robin replies, “No, every Englishman’s home is his castle!” Big cheers. Russell Crowe – like he did in GLADIATOR – invents democracy again! Like the characters in BRAVEHEART, these medievals are somehow imbued with a 20th century independence even though they could not have comprehended any method of governance other than aristocratic land barons, and would not have been educated enough to care otherwise.

Rotund Mark Addy (THE FULL MONTY) is perfectly cast as Friar Tuck, instrumental in turning Robin to the ways of “robbing from the rich to give to the poor,” of which there is only one instance, very well-staged.

William Hurt is cucumber-cool as Lionheart’s Chief of Staff, fired when Prince John takes over, replaced by Godfrey (Mark Strong), who traitorously leads the French to England’s shores, causing the final beach landing to birth the hobbled twin of SAVING PRIVATE RYAN.

Callous, heartless Prince John cannot rally England to beat off the French, so Robin the Boy Wonder unites the civilian armies like the son of Maximus Decimus Meridius and William Wallace, and Prince John takes the credit. He promises the farmers land for backing him, but like every politician ever spawned from Satan’s Vagina, he reneges after they help him win, turning on Robin at the end and calling him an “Outlaw!” with such a surfeit of vitriol it made the trailer.

The eeevil Sheriff of Nottingham is not the nemesis plaguing Robin through his legendary exploits, rather a peripheral figure at the end of the movie – to signify that The Adventures Begin Here.

As he did with GLADIATOR, Ridley Scott (and cinematographer John Mathieson) creates a living landscape for our eyes to wondrously crawl over – part CGI, part poo, all Merry Olde England. Writers Brian Helgeland, Ethan Reiff and Cyrus Voris avoid the old highwayman cliché for a compelling origin tale instead (the origin tale itself a clichéd concept these days). The movie might have slid into too much political intrigue or childish blockbuster, but retains a good mix of both. And I’d rather see a gritty origin tale done well, than a rehash of Errol Flynn camping it up in forest-green ballerina spandex.

Who are the Outlaws exactly?
ROBIN HOOD 2010 opens with the text: “In times of injustice and oppression, the outlaw takes his place in history.” Hmm… They take it for granted the “outlaws” are the good guy badasses who everyone supports and history proves morally right. Well, remember the Iraq War? It’s still going on – I don’ t care what year in the far future you are reading this, George W. Bush’s lie continues its cannibal tread. In that time of injustice and oppression, the outlaws were the administration who flaunted the laws on torture, on going to war without congressional approval, on habeas corpus, on American liberties, and a thousand other reimagined statutes, with Bush and Cheney openly admitting to war crimes to sell their ghost-penned books. Indeed, the outlaws took their place in history – for causing injustice and oppression.

Likewise, incidents like Prince John audaciously reneging on promises to his people and then calling Robin the outlaw happened every single day during the W. administration: illegally prosecuting two wars and calling anyone opposed to them terrorist sympathizers.

And in 2011, with Republicans trying to eradicate the lower classes by giving tax breaks and subsidies to the wealthiest class, hasn’t it become like Python’s Dennis Moore: “he robbed from the poor and gave to the rich – stupid bitch!”?

But then, politicians have always been bigger hoods than the people they proclaim “outlaws.”