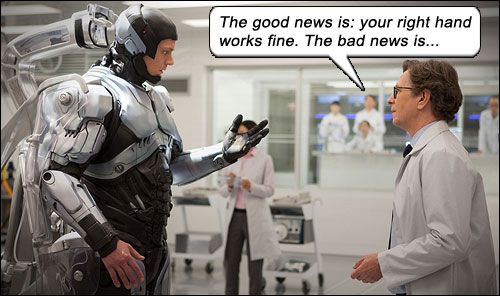 Being more Man than Machine? There’s an app for that…

2028 Detroit. When Alex Murphy (Joel Kinnaman) – husband, father, cop – is torn to pieces and left in a coma after an explosion, OmniCorp (a weapons firm marketing A.I. army bots) sees the opportunity to turn him into a human-robot hybrid, for promotional purposes. Under the guidance of Dr. Norton (Gary Oldman, THE DARK KNIGHT RISES, overdosing on Empathy Juice), Murphy is transformed into a robotic cop – Robocop – who has control of his actions, yet can be overridden like any computer by his creators.

This sincere remake of Paul Verhoeven’s 1987 original (starring Paul Weller) gives us the same dilemma of Robocop’s humanity-versus-mechanity, and both are very disturbing in their own ways. As in the original, RoboCop’s mind is manipulated by his makers, his constantly-surfacing humanity seen as a “problem” they must overcome, while to Alex Murphy, it is the thing he must hold onto the hardest.

In cool Iron Man duds, his servo motors whirring with every movement, Kinnaman does a fine emotional job, and then does an equally fine job when called upon to do the opposite and go robotic. Ironically, we only start to warm to Kinnaman in his role as the cold robot. He does nothing that takes us along for the ride while he’s human, but as he grows more accustomed to being RoboCop, and starts to walk more robotically, like Weller, we are swept up in his tragedy like jpeg attachments.

Michael Keaton (THE OTHER GUYS) is OmniCorp CEO Raymond Sellars (in a role that allows him his energetic Keaton élan), catering to a public that wants in its mechanical protectors “something that knows what it feels like to be human.” Unable to sell unthinking robots as police drones, he jumps at the opportunity to – ironically – dehumanize Murphy and sell him as a thinking, feeling, crimefighting machine.

Grizzled, skeptical, cynical army jock Jackie Earle Haley (LINCOLN) tests RoboCop’s skills. When the data shows Murphy’s humanity is giving him a millisecond of pause in killing test drones, Sellars tells Norton to make Robocop/Murphy less human. Disturbing, as Norton operates on Murphy’s brain. At the next field test, Norton explains, “During combat, the visor comes down and the software takes over. It’s the illusion of free will.” Night train into dark ethical territory now. However, he is congratulated by Sellars – for leaching the humanity from Murphy! Exactly what the military does. And the police force as well, with their camo gear and rocket launchers and mine-resistant vehicles – leaching themselves of humanity so they can do their jobs more efficiently without emotion. Norton is meant to represent the audience’s conscience in feeling remorse over Murphy’s lost humanity. But there is a strange aftertaste in this aspect; you see, with the American public’s decades of conditioning to respect and honor the unnecessary American military, Norton may be regarded as the killjoy.

So when it comes to the American military, ROBOCOP 2014 fails at convincing satire: the film’s opening shows a right-wing nutjob talk show host (Samuel L. Jackson, channeling Rushbo) extolling American superiority in terrorizing Tehran with drones and Artificial Intelligence robots. Scenes of American military bullhorning a Tehran province, “Please exit your homes for a non-invasive procedure” (the act of entering someone’s home uninvited – by definition, invasive! – and of course, bullhorning in English, not the local dialect), while a propaganda newswoman crows over the weeping Tehranians, “Locals have clearly embraced these routine scans.” Cognitive dissonance and hypocrisy was played more humorously in the 1987 version and its sequel (ROBOCOP 2, 1990) when scenes like this, though happening in real life, were kept either covered up or, at the least, not glorified, justified and rationalized by mainstream media like THE HURT LOCKER, ZERO DARK THIRTY and AMERICAN SNIPER.

Isn’t it awfully nice to have a penis?
Isn’t it frightfully good to have a dong?…
— Monty Python, “The Penis Song,” THE MEANING OF LIFE 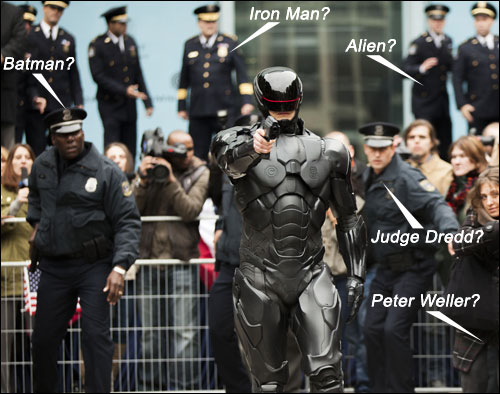 Better effects technology allows the filmmakers to simultaneously gross us out and traumatize us when Dr. Norton shows Murphy what is truly left of him – merely his brain, lungs, heart and one hand. Horrified, weeping, Murphy asks to be killed – to end the truly nightmare existence – and for the life of me, I can’t see any reason not to fulfill his wish, yet Norton has vapid, unimaginative excuses like, “What do I say to your wife? What does she say to your son?” Uh, just tell ’em Murphy died! Why the chokehold on “life” no matter its lack of quality? How come no one takes anyone that asks to be killed seriously?

Even if his wife (constantly-morose Abbie Cornish) still loves him – what good is he without… that? Do I have to spell it out? He’s nothing but Ken-Doll down there now. Emotions are one thing, but physical interaction is why young men and women get together. Between two prime mating specimens, don’t talk about love without roughly inserting sex into the equation. Is he going to continue a platonic Just Friend relationship with this smokin’ blond, while watching her carnal needs being satisfied by doofuses from Craigslist? Why is she dolling herself up for his first visit home as Iron Man? Is she trying to arouse him? How exactly? I bet she’s perfumed her kittycat too. What for? He can’t use it. What’s the point of a hug? A hand caressing the metal surrounding his face? The relationship between a father and son is more understandable. But a husband and wife? You lost me at three-prong male adaptor…

Weighing in at PG-13, ROBOCOP 2014 cannot be as politically uncompromising as its R-rated original, so Robo does a lot of tasing, and only shoots and kills those perps who are shooting at him, because Greedo Fired First. When Robo is uploaded with all the city’s criminal records, cellphone numbers and CCTV files, etc. no one raises an eyebrow at this exclusively modern, invasive blight or The Terrorists Win. And Robo gets to torture perps without a trial because Alberto Gonzales said so. (Actually he said, “I don’t recall” but don’t get me started…) After the self-awareness etudes and corruption scandals, action movie protocol kicks in and director José Padilha (ELITE SQUAD) ensures that shooting bad guys in warehouses and blowing stuff up ensues in exciting order.

There are many homages to the original (from the ED-209 designs, to “I wouldn’t buy that for a dollar!”), however, writer Joshua Zetumer saves RoboCop’s most famous line for a very poignant moment, which indicates he has at last shucked off his corporate programming, “Dead or alive, you’re coming with me!”

How sweet; he’s become a Real Cop at last…