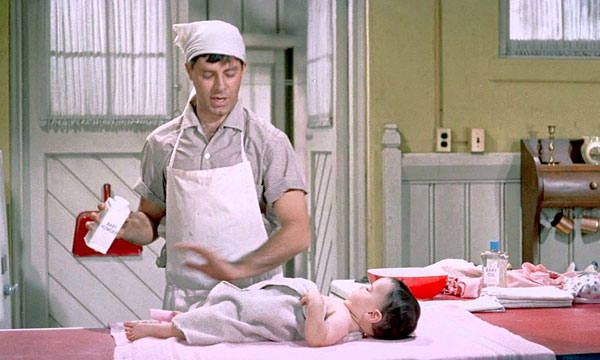 Baste liberally. Enjoy at room temperature with a serving of guilt.

When the bough breaks…

Jerry Lewis tries to fulfill the roles of both Dean Martin AND Jerry Lewis in this lurid tale of deceit and obsession disguised as family farce, where an unwed Hollywood starlet secretly leaves her new triplets in the care of her childhood sweetheart in a small town, to avoid scandal.

The highest hurdle for 1958’s ROCK-A-BYE BABY is figuring out how to make an unwanted pregnancy palatable (Mexico – tequila – bullfighter), and then to make it “romantic” (the Moon – youth) to smokescreen the slut, and to remove all thoughts of abortion in this family movie, then to make her look like the victim (– her image tarnished!), then to come out the other side making the expectant mother melodrama the shit out of her anti-social situation (“I might not have been a good wife, but I’ll be a fantastic mother”), thereby exonerating her from her underhanded scheme to dump the babies on her sweetheart (because he would still do anything for me!), and finally, to find a dope that could be so easily duped – oh look, it’s Jerry Lewis…

By the time we are through the apologist contortions of that first scene, our heads are about to explode with outrage. Writer Preston Sturges and co-writer/director Frank Tashlin set up such an idiotic premise, the comedy that Jerry somehow finds in the ongoing montage of his baby-care methods, is undercut by the absolute cruelty of the premise – dumping three babies on a young guy without the means or maturity to care for them.

Jerry is Clayton Poole, a klutzy TV repairman in Midvale California, whose childhood sweetheart went on to become international starlet Carla Naples (Marilyn Maxwell). Carla rules out leaving the babies in Midvale with her Papa (real life Italian opera singer Salvatore Baccaloni) or sister Sandra (Connie Stevens) with watery excuses that hold up as much as the opening barrage of bullshit. Just so happens Papa and Sandra are inextricably linked to Clayton, Papa hating Clayton for his ineptitude, and warning Sandra against pining after Clayton. Clayton refuses frumpy little Sandra’s open advances anyway, he remaining faithful to an ideal (Carla) that is unattainable. Until, it seems, the plot runs out of steam and Clayton and Sandra are paired up for comedy convenience.

Papa discovers the babies are his secret granddaughters and reconciles with Clayton for being so paternal, then reconciles with the fact that the plot runs out of steam, so allows Sandra to marry Clayton.

In the frenetic climax, the writers simply throw in any plot points that might resemble farce: the press believes Clayton is married to Carla and the babies are his, then Papa claims the babies are Sandra’s so Clayton must marry her to make them legal – by the way, Papa’s claim of the babies being Sandra’s is not done with any legal documents or hospital records, but by appearing in court with a shotgun and shouting his declarations – and the judge simply believes it, declaring Clayton a bigamist. (Grown men wrote this story.) Clayton then goes on the run to escape the law – and by that I mean, he actually just physically runs out of the court with police chasing him, to, uh, jail him without any evidence, I guess? He escapes and there is no inquiry or followup. That’s the beauty of living in a democracy.

The challenge of any absurdist comedy is to suspend our disbelief, more so than any drama, because the situations are irrational. It’s how Jerry Lewis can get away with being recruited into the military in so many of his early films even though his characters are demonstrably retarded; it’s how Dean Martin can sing a song to any dame at any time in any place and have an orchestra start up behind him without anyone questioning what the hell–?! 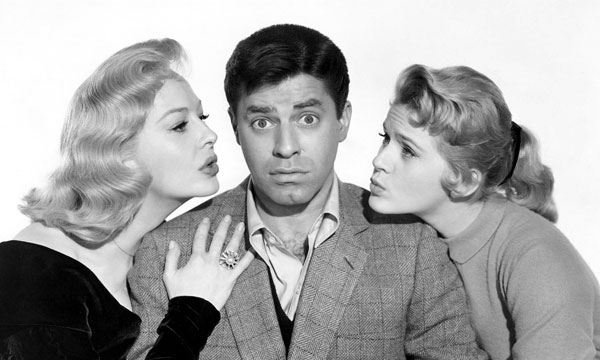 Dean-ing in a blond sandwich.

ROCK-A-BYE BABY fails to suspend our disbelief because its star is starting to doubt his absurdity. When he was teamed with Dean, Jerry could afford to devote his energies to being the monkey; though he could extend his acting chops at times, or explore “Chaplin shit” he was still locked into being the best Jerry he could be. However, at this point in his filmic career – his third solo film without Dean Martin – Jerry seemed to be losing his conviction on what made him “Jerry Lewis”; his Clayton is a mix of his nine-year-old persona and, surprisingly, Dean’s stable straight man. He’s trying to combine both Dean’s and his personalities into ONE CHARACTER – and it’s a tonal mess!

Firstly, Jerry sings the title song over the opening credits – in a “serious” Sinatra baritone. He’s using his real voice, not that squeal that breaks glass that we’ve grown used to. He’s past 30 and he’s going to embrace the man-tonsils now. This sets up very different expectations to any Jerry movie that came before, as we see him in a slick suit, roving through the opening credits doing “respectable” shtick. It doesn’t help that the first time we see him in the movie, he is doing his klutzy nine-year-old – but, didn’t you just croon that–? Weren’t you the guy who was just dressed in–?

Okay, so I guess you were just singing the opening like that, and now you’ve committed yourself to being The Jerry We Love, swinging on a chimney, losing control of a fire hose and wrecking a house singlehandedly – laugh out loud! – and when you’re going to sing again, we’ll hear that high-pitched squawk that makes us laugh— what the hell?!– Jerry sings no less than three songs in the film. And they’re all as serious as a heart attack! He even does a lachrymose duet over the babies with Baccaloni. This is Dean Martin revisited with a vengeance. It’s as if Jerry is saying to audiences, ‘Look, this is the formula you liked in all my Martin-Lewis musical comedies – me the monkey and Dean the crooner – well, I can provide all that by myself!’

But you can’t. Because this personality-splitting of one character turns out to be a higher hurdle than the stupidity of the plot. Turns out Dean might have been right all along, about keeping the formula simple. Jerry always wanted to explore the nuances of the tragedy behind the comedy (a la 3 RING CIRCUS), but Dean just wanted to gag and get paid. Now Jerry’s going right out on a limb to give us this combination of his and Dean’s characters, and in doing so, he dilutes both. We’re not following him out on that limb.

When Carla turns up to drop off the babies, Clayton becomes dead serious, in soft-focus, “I’ll do anything for you – give me the chance!” It’s Jerry doing the leading man thing. But it’s not working – because he’s lost his balls to this harlot. They try to humanize the whore by making her cry over burdening someone who loves her so much – but she leaves the babies nonetheless, without so much as a red penny of her starlet millions to tide him by! Dean never lost his balls this large to a dame!

Connie Stevens gets a song, and even Jerry’s real life son, Gary Lewis, cameos as Young Clayton (Gary would go on to a moderately successful musical career in real life). Jerry is also featured in one number fronting a Bill Haley-type band, cutting loose as the monkey, obviously shoehorned in because there was too much crooning. Probably the only sliver of hope we might glean from this generally unfunny outing is that at one point, Jerry lapses into his Julius Kelp voice – a character that would, a few years hence, succeed in combining comedy and pathos in THE NUTTY PROFESSOR.

Until then, we tread lightly over the creaking bough…