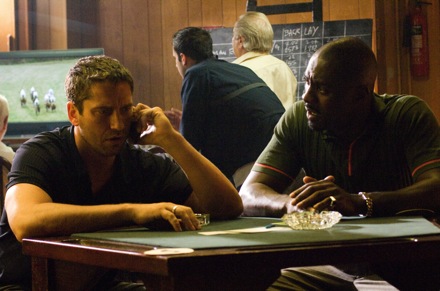 “Where do you wanna eat? What? At that new place called “Hell”? Okay, so tonight we dine in Hell.”

Another twisty, spanky, kablooey tale from the dirty messiah madman who gave us LOCK, STOCK AND TWO SMOKING BARRELS (1998), Guy Ritchie, about expensive hoods, cheap hoods, indestructible hoods, Russian hoods, and a McGuffin painting that we never see that everyone wants.

As with Ritchie’s other slambanging movies, describing the plot is a futile exercise, and the intricacies of the interconnecting throughlines is best left to a viewing while drunk on cheap port.

But here goes [deep breath]: Set in the snarling British real estate underworld where crime lord Lenny (Tom Wilkinson) handshakes a multi-million dollar land deal with Russian Uri (Karel Roden), with intent to scam him, even whilst Uri’s own accountant (Thandie Newton) is scamming Uri by setting up robberies of his money transfers, using a gang of small-time hoods known as The Wild Bunch (led by Gerard “Spartans! Prepare for glory!” Butler), while a painting of Uri’s, that he lent to Lenny, goes missing, stolen by Lenny’s rock star junkie son, Johnny Quid (Toby Kebbell, ripped like Crucified Jesus), who has faked his own death to boost album sales, Uri dispatching two relentless Russian wardogs to find the painting, find the traitor, find his money, and find the Wild Bunch, who discover they not only have to deal with an informer in their midst, but a homosexual as well…

It’s definitely another intricately thug-woven Guy Ritchie story – but ROCK N ROLLA lacks the verve of Ritchie’s cinematic flamethrowers, SNATCH and LOCK, STOCK. The execution seems like a poor man playing Ritchie. It’s him at the wheel, so we can only contend that Ritchie’s Madonna years somehow softened his wolverine bite – after all, he did give us SWEPT AWAY. (‘Scuse me while I kiss the toilet.)