My flesh was crawling so vividly during every minute of the mindless, sanitized, second-rate karaoke movie ROCK OF AGES that by the time it ended I was sitting in one seat and my flesh was four seats over. 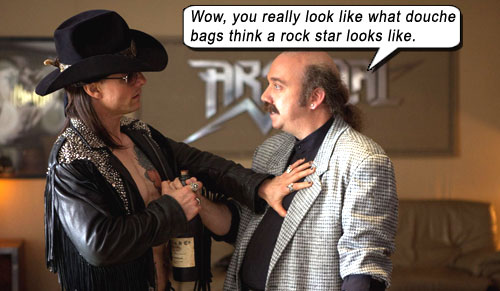 I would sincerely like to kick this movie to death. This whole concept is a MISTAKE. From the Broadway Musical to this dungheap of a movie, STOP TAKING ROCK SONGS AND BROADWAYING THEM!

Storyline begins by bastardizing the concept of Journey’s Don’t Stop Believin’, following “small town girl” Sherrie (Julianne Hough) to Hollywood, where she Meets Cute her “city boy” Drew (Diego Boneta) and they follow their dreams to slick, perfect-production, no-stress, no-rehearsal-required, full-lightshow rock stardom. Disemboweling some of hard rock’s greatest hits along the way by singing them like douchebags. The movie is screaming Fuck You at us louder than the faux-metal guitars.

Tom Cruise is rock legend Stacee Jaxx, with a body shaved so close and sensual, it could only have been done by an altar boy. Even in his best roles, he’s not the greatest of actors; here, he is the least of actors in the worst of roles. Holding his 48-year-old gut in, he performs Bon Jovi’s Wanted: Dead Or Alive. By this time, my flesh was over at the bar.

The songs are woven perfunctorily into the prosaic storyline, to give every actor a chance to mutilate the independent, creative Spirit of Rock beyond recognition: Sister Christian, Paradise City, I Wanna Rock, Here I Go Again, Juke Box Hero, Pour Some Sugar On Me, Rock You Like A Hurricane… All these songs that I thought I liked; now that you put them this way, turns out they’re pretty fucken lame.

Unlike ACROSS THE UNIVERSE (where The Beatles’ songs were taken apart and put back together meticulously, where we could hear the craftsmanship of each song, where every actor sang and acted their parts without the sideways sniggering), ROCK OF AGES makes the audience for this music cringe, and makes those who hate this hard rock genre hate it even more. Or just laugh at it like women laugh at limp penises.

There is a certain level of craft that goes into any song, not just Beatles or 80’s songs. Yet just playing the notes or singing the words means you don’t get it at all. With these hard rock songs, there was also personality, attitude, an earthy rawness (even in the slickness of the post-Leppard guitar production); they were from an era in spacetime when the world mind was irrationally enamored with this style. ROCK OF AGES captures nothing. Writers Justin Theroux, Chris D’Arienzo (who also wrote the Broadway version) and Allan Loeb, and director Adam Shankman (HAIRSPRAY, BEDTIME STORIES) haven’t got a clue.

Who let Alec Baldwin sing? As big a blunder as letting Jack Nicholson sing in TOMMY. Russell Brand joins Baldwin in a gay rendition of REO Speedwagon’s I Can’t Fight This Feeling. No, I mean it’s actually gay, as in homosexual, where Brand and Baldwin suddenly engage in amorous kissing and feeling up each other from out of nowhere. Really good acting, guys. I’ll be sure to mention it to the Academy.

Reference to the Parents Musical Resource Center (PMRC), that coven of senators’ wives who stultified free speech in the ’80s, led by an embarrassing Catherine Zeta-Jones. In the most startlingly blunt-skulled example of reappropriation ever, this PMRC group “sing” Twisted Sister’s We’re Not Gonna Take It to the rock club hosting Stacee Jaxx, as in “We’re not going to stand for this sinful rock and roll,” when the song’s original intent is to convey the misunderstood youth’s attitude toward society. They couldn’t have picked a more inappropriate song for the PMRC group, as Twisted Sister’s lead singer Dee Snider was a vocal opponent of the PMRC during its McCarthyesque heyday. And then to piggishly juxtapose Starship’s We Built This City over We’re Not Gonna Take It… Who said any of this was okay?

Bryan Cranston is here – oh God, forgive him! Julianne Hough – the new Jennifer Aniston? That look will make you actually fall in love – or at least the simulacrum thereof. Diego Boneta looks like a young Jay Mohr. And Malin Ackerman’s panties get so close to Tom Cruise’s face he almost goes straight.

It’s not a parody – that might have been okay, like SPINAL TAP, or FEAR OF A BLACK HAT. There is miniscule “acceptable” parody: manager Paul Giamatti’s ponytail, dudes who look like dudettes, Jaxx’s insouciant demeanor – but then movie tries to make these mongos with mics look like they’re actually singing these songs. It tries to “impress” us. And it just – doesn’t – work when these people who have never performed a song onstage keep moving the mic anywhere except near their mouths, and yet still produce perfect vocals. Is the posing good? Yeah, my pose looks fresh? Yeah, do I look cool like a rock star when I pose, without knowing the reason why my body is in this position due to weight of guitar, arc of mic, strength of snare hit, position of foldbacks, height of boot, volume of amp – anything about live rock at all? Yeah, look at me posing. Fuck you.

My flesh caught the first bus out of Hollywood and I haven’t seen it since.

imdb
Word Count: 860      No. 1,040
Rock Of Ages ♦ Def Leppard
See that moment at 1:45 – 1:54? Guitar as gun/erection; hair as independence/rebellion. The epitome of Rock, epitome of Band, epitome of PowerMoneyChicks. That’s what made me desire to be ensconced in this fake, unholy, deathwish business. You have a lot to answer for, Leps…