Even though THE ROCKER is about a middle-aged rock drummer who sees a second stab at fame with his young nephew’s band, it is mostly for nerds who need to get laid by pretending to be rock stars. 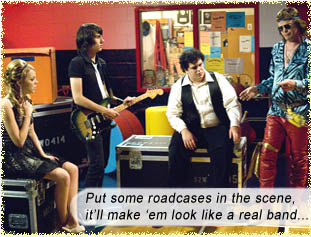 Rainn Wilson, fresh from his stint on Steve Carell’s inferior-to-Gervais’s THE OFFICE, does a bang-up job as drummer Robert “Fish” Fishman, whose 80s hair-band, Vesuvius, cracked superstardom soon after they kicked Fish out of the band. The opening scene of Fish being sacked is unnaturally funny (featuring Fred Armisen – “Obama” on Saturday Night Live – as the bassist in Vesuvius), its over-the-top lunacy promising a film that laughs in the face of arena rock and loogies on the Aquanetted hair of fame.

Instead, THE ROCKER turns down the volume as if the neighbors are complaining.

Twenty years after his sacking, Fish is jobless, living in his sister’s (Jane Lynch) attic, near Cleveland’s Rock and Roll Hall of Fame, watching bitterly as Vesuvius is on everyone’s playlist with yet another chart-topping album.

Fish finds an outlet for his hair-metal flamboyance and inappropriate nakedness in his nephew’s band, A.D.D. – who ask him to drum with them out of desperation only to find their boring GenX style does not quite mesh with Fish’s energy and excitability.

A.D.D., led by Fish’s nephew, dork keyboardist Matt (Josh Gad), is a study in everything wrong with kids today in bands, i.e. they don’t have a clue. (Did I just say, “kids today”? How old must I be to say that with impunity?) And it hurts my skull how it is so obvious the film-makers (director Peter Cattaneo and writers, Maya Forbes, Wallace Wolodarsky and Ryan Jaffe) don’t have a clue on how to make these youngsters seem like they have a clue. Without turning on PlayStation 3. 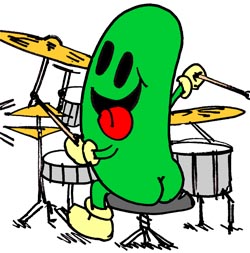 Keep BBRRETENDING, kids – wait until you get onstage and find that you can’t watch a TV screen and press buttons to make music; wait until you realize you have to learn songs and practice to make a band go; wait until there’s a crowd staring blankly at you and you have to ad-lib to keep them amused, at the least, interested; wait until you put your mouth to a mic attached to a real P.A. and it picks up every breath, every subtle missed note, every nuance, every pop and sssibilance sibilanccce…At least the movie represents that it’s hard to get a gig. Because it is. And the band only score a national tour through a chance YouTube debacle involving The Naked Drummer.

Rainn Wilson can really play his drums, so looks comfortable behind a kit onstage, and I would wager he’s beaten the boards in his share of hippie bands; yet none of the other players are worth throwing tomatoes at: lead guitarist/ songwriter/ vocalist, Curtis (Teddy Geiger) is a real-life artist, but never puts his mouth close enough to the mic onstage to obscure his pretty face for the director; Josh Gad drives keyboardists down dweeb highway back into the dork ages, with his useless miming and gutless personality; and bassist Amelia (Emma Stone, SUPERBAD) channels Tia Carrera from WAYNE’S WORLD with her faux-picking and arbitrary non-chords on the bass neck, while completely forgetting she’s on Earth only to procreate, not pretend to have musical talent.

A remixed, meaty version of Twisted Sister’s I Wanna Rock heralds the start of the band’s road trip, which culminates in a big concert supporting Fish’s old band, Vesuvius, who are now so successful they speak in British accents. A.D.D. goes onstage as a support act with the full lightshow and impeccable sound – since when have asshole headliner road crews been so supportive? (Once again, the filmmakers displaying NO CLUE on how the rock scene really operates.)

THE ROCKER touches briefly on its promise in many places – it is at least as enjoyable as watching Poison have arguments onstage – but delivers a sappy ending that ruins every promise of comedy, musicality, and faith in humankind. With lame, angst-ridden GenX songs ten years too late to be fashionable, there is every indication A.D.D. are on their way to superstardom – because the script says so.

Fish gets the MILF, the dork keyboardist gets his virgin organ smoked, and guitarist Curtis falls for bassist Amelia, as if they are some kind of soul-mate pairing, rather than the high maintenance headache Curtis has just derailed his career with. Here’s the long road ahead, broken down: he spends time writing in his studio, she complains she has needs; he screws her every night, she complains he only wants sex; a fan looks at him lustfully, she won’t attend rehearsals; he doesn’t look at other girls, she complains he is too attached to her; he writes a song with another girl’s name in it, she refuses to play it; he writes a song about her, she complains it makes her look needy; he pays all the bills, she gripes she feels like a groupie whore; they go dutch, she whines that a Real Man would pay for everything; he wants to go on tour, she wants to have kids…

This ain’t rock and roll. This – is genocide!

BAD SYNERGY
The band in THE ROCKER gets its break on YouTube.

Though it is a haven for innumerable talented unsigned musicians, YouTube has no Quality Control bar, so nonces are given equal time with virtuosos.

The nonces on YouTube and the film, THE ROCKER, are part of the same dangerous synergy. Like the countless bad-tone, over-distorted, untidy guitarists who think they’re Yngwie; like the high school band who think they can groove on the piano breakdown in Zep’s Fool In The Rain; like the jackass with the “instructional” on Recognizing 5/4 Timing in Music – who plays in 4/4 and makes up the counting as he goes along to “prove” he is playing 5/4! A music lesson? Or a music LESSEN?