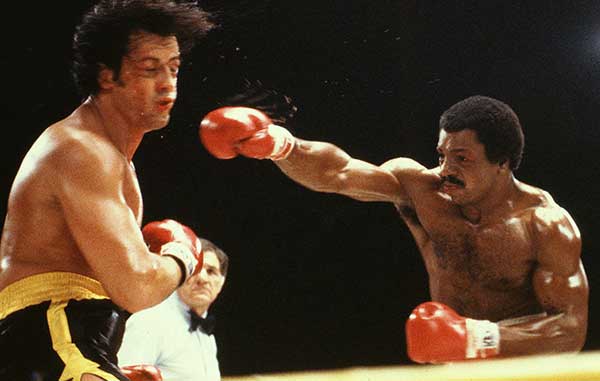 When phantom punches ruled the world.

The Stallion that became a Pussy.

The giant title floats across screen – ROCKY II –and we are assaulted with the visual of two men beating each other to death. Blood, eyes swollen shut, back-sweat and bruising, bone pounded, ears cauliflowered, cutting an eye open, nose broken – what kind of christian crucifixion torture-porn am I looking at?

The story of Philadelphia boxer Rocky Balboa (Sylvester Stallone) continues in ROCKY II from the second we left him back in ROCKY (1976). Recapping the last few minutes of Rocky’s bout with Apollo Creed (Carl Weathers), we then follow the damaged boxers in ambulances back to the hospital, where the two meet in wheelchairs surrounded by their entourages, both bloodied and battered, eyes swollen shut, with Creed now yelling at Rocky, baiting him for a rematch. Considering that Creed won, and remembering their badly-looped dialogue at the end of that match (“Not gonna be a rematch.” “Don’t want one!”), we can only assume it was the BOX OFFICE demanding a rematch, not Apollo’s damaged pride or emasculation.

(ROCKY was the highest grossing film of 1976. And with a production budget of just one million dollars, its worldwide return was over 11,000 percent.)

Stallone’s script for ROCKY had a great hook – a nobody given the chance to become a somebody; it created the flow chart for “inspirational sports movie”; it was responsible for The Training Montage; it spoke to underdogs about going the distance, and it didn’t bow to convention by making the hero win. Stallone’s script for ROCKY II is a forced mélange of tropes where the hero supposedly “discovers himself” but really only proves he’s an unqualified, ignorant mutt.

Rocky retires after his bout with Apollo, figuring he’ll never do anything more box-ier than sparring with the World Champ. He marries Adrian (Talia Shire), buys a house, then finds he can’t hold down any kind of job (TV commercials, abattoir, office job). He is, after all, just a slow-witted boxer. He comes to the conclusion to return to boxing, even though his doctor advised him not to fight anymore for the threat of going blind. But as Rocky laments to Adrian, out of pathos, humility and – let’s face it – ignorance: “It’s all I know.”

Meanwhile, the Champ is getting letters (that’s the olden day’s version of tweets, you idiot children of smartphones) calling him a coward and a loser; newscasts are denigrating his legacy and there’s really no other boxer around to use as villain, so…

Rocky visits his trainer Mickey (Burgess Meredith), hat in hand, asking to be trained to face Apollo again, which Mickey vehemently vetoes. Rocky has lost the peripheral vision in his right eye, and Mickey gets in a good wallop to prove a point: “And that’s from a broken down pug like me. The Champ would hurt you poimanently! POIMANENTLY!”

I feel Rocky’s pain. This is what we all face as we grow older. The dilemma to quit gracefully the only job/avocation we know, or to peter out gradually, getting more ridiculous holding onto our youth as the years wear on. 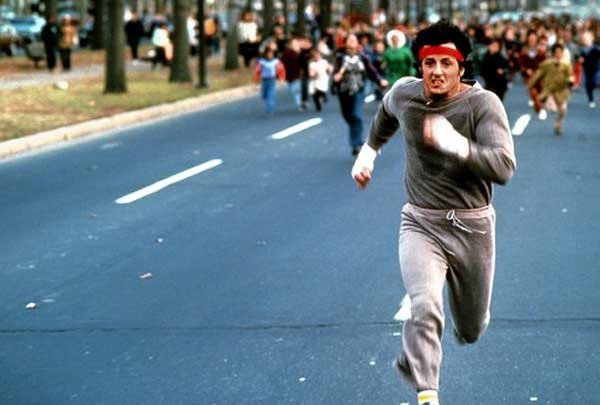 “You can’t catch me – I’m the Gingerbread Stallion.”

ROCKY II is like a chick wondering what to wear. Rocky is made to look indefinite and purposeless. Adrian doesn’t want him to fight, so Rocky timidly starts training again, like a wuss. He doesn’t show us anything that Mickey says he possesses – heart. If anything, he’s got NO heart. No principles, no ambition. And also, no talents outside of beating up people. Either go against her wishes and TRAIN LIKE A DEMON, or comply with her wishes and DON’T FIGHT. Instead, he girl-taps the punching bag quarter-heartedly, which is exceedingly annoying, and Mickey is totally justified in once again calling Rocky a bum being ruled by the puss.

Then Adrian goes into a coma (pregnancy complications – whoops! We’ve just lost all the male viewers), and she lies in a hospital room disturbingly devoid of intravenous tubes, heart monitors and machines that go ping. The method used to sustain her life and keep her healthy until she regains consciousness was seemingly to Just Wait Around.

Then Rocky begins reading to her. Oh, so now it’s a horror movie. Rocky “reads” for just a few minutes of compressed time, but it seems like a two-hour ordeal from our end, and we praise the dolphin god Bathuselah that Rocky’s droning brings Adrian out before it puts us under. When she wakes, she doesn’t say, “I’m glad you didn’t fight and risk your physical health and brain damage, because we have a child on the way” – no. She shyly says, “You know what I want you to do? Win!” Why did she capitulate? Because it’s 1979 and she’s a chick, I guess.

There’s something very poignant about that now-famous run through the street market in this film. In ROCKY, it was guerilla filmmaking, with no permits, no prep, a Steadicam following Rocky through a bemused group of vendors and customers. Now, a reveling group grows to hundreds of kids following Rocky through the market, through Philly streets and up the stairs of the art museum. Because in the movie – and in the real world – everyone knows Rocky. In the last movie, Mickey kept begging Rocky to “stay down” to avoid further beating, but now, nothing and no one can keep Philly’s favorite son down… 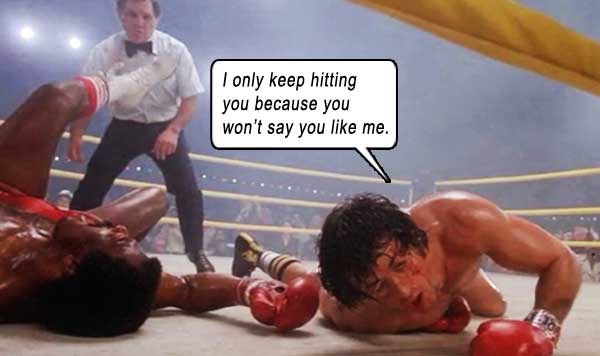 ROCKY told us that if you train hard you can be a TRYER. Most people misread that message as ‘If you train hard, you can be a WINNER.’ Now ROCKY II mixes up its messaging: It tells us if you train half-heartedly, you can be a winner. Sure, Rocky started training properly with growls and one-handed pushups after half his training period was over, but Apollo was training at peak capacity throughout that time. Either Apollo is a terrible champion or Rocky is one helluva natchell-born fighter. And if Rocky’s successes came about because he’s a natural, then no matter how hard YOU train, you’ll never be as good. Because to be a winner in real life, you need to train as hard as you can, as long as you can. The movie is trying to have it both ways, saying you can slacken off and then cram all that training regimen into a montage – the most annoying filmic device since Red Digital Readouts on bombs – and come out on top.

Having written the script for 1976’s ROCKY, Stallone wanted to direct it as well. He didn’t have the clout at that time. Now, with ROCKY’s Oscar successes (10 noms, 3 wins, including Best Picture), he has been granted that hallowed seat. And his directing is not half bad. Unfortunately he has given himself a pile of clichés to work with that do not inspire anything creative or exciting. For example, Pauly (Burt Young, who plays Adrian’s brudda and Rocky’s caustic pal) was a volatile, unpredictable presence in the last movie; here he is a fifth wheel; both Adrian and Mickey suddenly change their minds on Rocky fighting, with no compelling reasons as to why; the Champ comes off as a little too obsessive about fixing Rocky’s little red wagon; Rocky goes up against Apollo completely unprepared physically and mentally and still wins. How much of this contradictory storytelling are we prepared to accept? Yes, we wanted to see the continuing story of Rocky, but what percentage of actual story are we prepared to sacrifice to see our favorite boxer make cauliflower soup with his ears again?

Amidst gladiator music, Rocky punches Apollo and Apollo punches Rocky. Tony Burton yells Noooo! Both fighters adopt the age-old Marquess of Hollywood rules of no one keeping their hands up to guard their faces. Both punchers punch, and both go down. Rocky gets up first and wins.

Sorry, Stallion, Mickey was right: you should have stayed down.