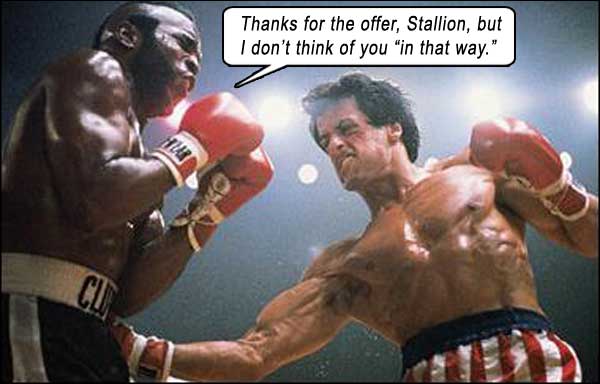 The Pussy that became a Gangbanger.

I pity the fool that takes ROCKY III seriously.

ROCKY III is the STAR TREK IV of Rocky Movies. The most glitz and glam-blammo, with a story so basic your dog could have written it; the most color and muscles and shouting – and definitely the most fun!

Rocky Balboa (Sylvester Stallone) must defend his boxing title against “wrecking machine” Clubber Lang (Mr. T). And who better to help him than his opponent from the first two movies – Apollo Creed (Carl Weathers)! Cutoff tees, tiny shorts, and man-hugs at the beach ensue.

Whereas ROCKY and ROCKY II retained a hard-edged street grit, ROCKY III has been squorzled through the Hollywood sausage machine by writer-director Sylvester Stallone. No foul – he’s moving with the times, with the slicker production, the harder hitting and the manlier midriffing. On the other hand, the underdog/gladiator ethos that underpinned the first two streetwise films has been lost to wealth and hubris. Rocky is now living the high life, with mansions, cars, endorsements, riches – and having defended his heavyweight title 10 times.

Stallone has found a certain stride with this film, artfully blending comedy and drama, in a slick, caramel-coated apple delight that has very little nutrition, is riddled with cliché, and follows a predictable flow chart of hero being taken to his lowest ebb and rising in a hail of glory. Yet all the ROCKY movies send mixed messages of “battle = right” and “trying = winning,” and none of them can give us reason enough for the characters to “do” what they do. For example, Apollo shouts at Rocky, who is taking lots of hits, “It doesn’t take a man to stand there and get his head beat off.” First of all, did someone say “beat off” in a film where men wear cutoff tees and tiny tiny shorts? Second, Apollo is correct, yet he doesn’t take the logical next step: It doesn’t take a man to enter a boxing ring to prove he’s a man in the first place. Rocky could have actually been a bigger man if he had not taken the bait of his challenger, and just walked away from the silliness. 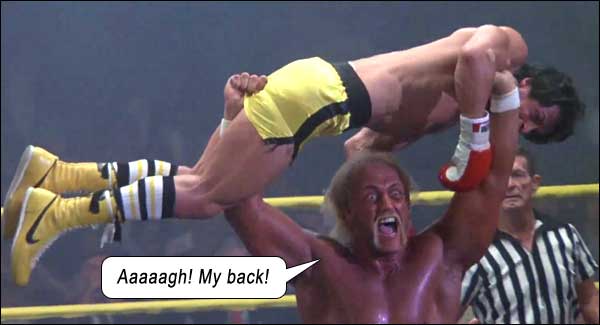 Hulk Hogan cameos as Thunderlips in a charity match against Rocky. The stupidest thing about this boxer-versus-wrestler scene is that the characters are taking it seriously – Thunderlips is really trying to break Rocky in half. There is no producer coordinating the fighters, explaining the choreography, etc. Yet Rocky seems well-versed in the wrestling moves, bending and flowing with the holds and falls (for fake-wrestling to work, both combatants have to be in on the gag), so Rocky either practiced these moves with Thunderlips or he’s a natural-born fake-wrestler as well! I can’t begin to deconstruct how dumb it is that Stallone thinks WE are dumb enough to believe this is how a charity match would unfold. Reminds me of that idiotic 1976 charity bout between Muhammed Ali and wrestler Antonio Inoki, where Inoki just lay on the canvas and tried to kick Ali’s knees for the whole unsatisfying match. An egregious embarrassment for the wrestling and boxing world because they DID take it seriously.

Trainer Mickey (Burgess Meredith) has moved into Rocky’s mansion, and, after being sorely ignored during ROCKY II, Pauly (Burt Young) unleashes his demons and almost gets interesting until he too is moved into the boxer’s manse to shut him up. Wife Adrian (Talia Shire) is wearing furs and hooker mascara, and from all the magazine covers and television ads, we see that even Rocky has undergone some kind of beautification surgery, making his face gaunt and tight.

And look at that V-shaped body, a ballistic missile cut like Jesus on the cross. Arguably the greatest shape Stallone would attain throughout his ROCKY/RAMBO years (maybe only rivaled by his shape in RAMBO III, 1988). Sylvester Stallone was in his prime here. He doesn’t even look like a boxer anymore – he’s a bodybuilder, concentrating on the abs and rib muscles, going for definition, not strength or stamina. (Stallone’s body fat was allegedly just under 3% during this shoot). Gone is the pudgy naïve boxer that represented Everyman. In his place, kind of an asshole.

Someone say asshole? Enter Clubber Lang (newcomer Mr. T, mohawked, bejeweled, outrageous-for-this-era), biding his time becoming the number one boxer in the world and then exploding and challenging Rocky at the unveiling of the Rocky statue on the steps of the Philadelphia Art Museum…

That statue. A strange piece of art, no? With a stranger nomadic history. Created specifically for this movie by sculptor A. Thomas Schomberg, the 2-ton, 10-foot tall bronze statue of Rocky Balboa is mounted at the top of the Philadelphia Art Museum steps when Rocky is receiving his honor from the city.

After filming on ROCKY III was completed, Stallone donated the statue to the art museum, who declined it as a “movie prop” – not art at all! Oh, burn!

It was moved to the front of the Philadelphia Spectrum arena (where Rocky battled Apollo Creed in ROCKY). It was brought back to the top of the steps for a few films (including ROCKY V), then returned to the Spectrum.

In 2006, due to the mayor of the city realizing the statue’s avid tourist draw (i.e. dollar value for his town), and its attachment to one of Philly’s favorite adopted sons (Stallone/Rocky), the statue was relocated to the bottom of the steps of the art museum. Poimanently!

Mickey is against Rocky taking on Clubber, worrying that Clubber is Too Legit; confessing that he had been “protecting” Rocky through his titles, hand-picking fighters that were not exactly chumps, but not exactly killers. Mickey laments, as they sit in his luxurious room, “The worst thing that can happen to any fighter, happened to you – you got civilized.” (Isn’t that the problem with boxing? Only Neanderthals should be competing, because only they possess the requisite ferocity to keep punching another man for no reason. And isn’t that against the whole human ethos of civilized forward momentum?)

Mickey’s meddling is quite a bombshell for Rocky, as it means everything Rocky has won, all his riches, and who he is – are a lie. After Mickey’s death, it is no wonder Rocky goes through a PTSD downer, where even Apollo’s tiny midriff shirt fails to excite him to action. Adrian must give him a platitude pep speech that is totally illogical, but seems to make sense enough to get his head kicked in one more time.

Mr. T was scary as hell back then. All that badass jewelry and leather and gold chains and Native American feathers. He didn’t hate Rocky – he just “pitied the fool!” Remember Eddie Murphy joked about Mr. T coming after him in RAW? That must have been terrifying. Then Mr. T played B.A. Baracus on THE A-TEAM television series and that erased much of the terror and mystery. And nowadays, that mohawk and those overdone gold chains are not so much a statement as a punchline. Does anyone take this guy seriously anymore?

Still, it didn’t matter how scary Clubber Lang was, Rocky once again trains like a chump, surrounded by finery and glitter, disregarding Mickey’s yelling about gettin’ the blood and sweat and tears back. Though Rocky is the hero, by this third outing, we’re wondering if he’s ever going to learn how to properly prepare for a match? Or do we keep turning a blind eye to this hubristic, arrogant dope? I mean, how did he retain his title 10 times?

Mickey has a heart attack on the way to the ring, and is laid out on a table in the locker room, unaware of the bout’s results… In two rounds, Rocky is beaten to a pulp by Clubber, who claims the big gold dance belt from the Stallion. The most poignant moment in the film is when a bloodied Rocky sadly reports back to Mickey, still lying on the table, his eyes closed, leaving out information to make Mickey think he won:

During this exchange, a single tear slowly rolls down Mickey’s cheek from his closed eyes. He wants his last thoughts before death to be that of Rocky winning – but the pragmatist in him knows that’s a lie. Yet he keeps up the façade; his last good deed for Rocky – letting Rocky think he never hurt Mickey with the bad news. It would take pages to unpack the greatness of the small things in this moment – suffice to say, this scene alone is what Oscar lives for. 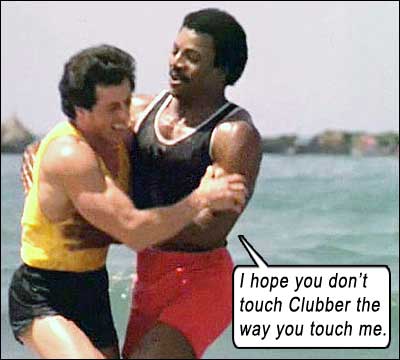 Apollo Creed comes calling, to train Rocky. Why? He explains it, but I’m not buying it. Something to do with man-dancing in the ring, wearing cutoff tees that the Village People would condemn as too gay, frolicking in the surf like male strippers, and making Rocky wear Apollo’s pants. Isn’t that what all boyfriends do?

Apollo makes a point about getting old – that there’s nowhere to go for gladiators. He’s right. When you are in a young man’s profession, what do you do after your age takes its toll, and it’s the only thing you know how to do?

For inspiration, Apollo plays the Survivor song, Eye Of The Tiger, while he’s training Rocky, and Pauly makes racist comments about Rocky not being able to train “to this jungle music” – but it’s white guys, Pauly! Playing rock, not hip hop!

Rocky versus Clubber II: More frenzied fists flying, no one blocking anything, just taking it on the head, each punch sounding like a slab of beef hitting the side of a steel shed. We’ve left reality a long time ago, but just to make sure we don’t accidentally step out of fantasyland, fortunes turn on a dime during the match: Rocky let’s Clubber club him senseless – and suddenly starts clubbing Clubber senseless. Because – Eye Of The Tiger.

I pity the fool for whom Tony Burton is screaming Nooooo!