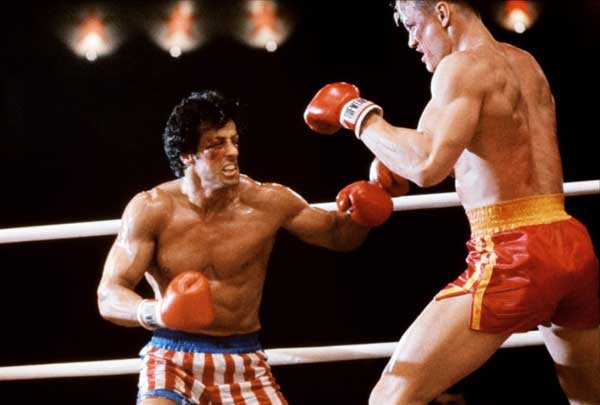 Then the giant heard the noise and found Jack stealing his beans.

The Gangbanger that became a Patriot.

ROCKY IV is a montage of montages. And some boxing.

Russian soldier-turned-boxer Ivan Drago (Dolph Lundgren) is brought to the United States by politicians from Mother Russia seeking to prove their superiority in the Cold War. They show how Drago has trained with “computers” and can punch real hard. This makes Apollo Creed’s pussy wet, because he just loves getting punched real hard. For some reason – even though the Russians sought a match with Rocky Balboa (Sylvester Stallone) – Apollo (Carl Weathers) feels it his duty to get in the ring with Drago, and get punched real hard. When Apollo dies at Drago’s hand, it is up to Rocky to take on the iron Russian to prove… uh, to prove… wait, I know there’s a reason here somewhere…

In keeping with the groove of the ROCKY series, movie opens with the last few scenes from the previous movie, ROCKY III. Eye Of The Tiger underscores a montage of Clubber Lang beating on Rocky, then Rocky and Apollo going toe to toe in private, and the infamous still frame of them about to punch each other simultaneously (must admit, that’s a fantastic still, and it looks like they must have knocked each other out in real life to be able to get it so intense).

Fade to present. Rocky is still married to Adrian (Talia Shire) with a young son, still rich as Croesus, with Lamborghinis parked in the mansion driveway, and now – he has a robot. A gift for Pauly’s birthday (Burt Young), who is fearful at first, until he starts banging it, we presume, the way he calls it “his girl” later. 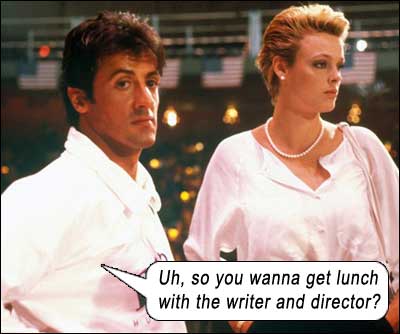 Written and directed by Sylvester Stallone, ROCKY IV follows no discernible logic in its plot, with Apollo Creed looking like some sort of pathological narcissist. His worries from the last movie are carried over into this one – the fear of growing old and irrelevant – so he’s willing to do stupid things to remain in the public eye. He blurts out his reasons for fighting Drago like he’s trying to get past this plot point before anyone notices how psychopathic he is. No one notices, because ROCKY IV is blessed with one of those eighties soundtracks that sounds so much like an eighties soundtrack, it won the 1985 Razzie for Worst Musical Score. After it finishes beating us about the head like Clubber Lang, Apollo’s decision looks pretty darn smart.

Drago’s wife is played by Brigitte Nielsen, Stallone’s soon-to-be wife (married Dec 1985), with an accent that is half-Russian, half-who-knows.

So Apollo was retired for five years – did he even train for this match? He’s getting as hubristic as Rocky! James Brown opens the bout with one of his most bland songs, Living In America (and we magically hear all his lines even though the mic is often nowhere near his mouth), with a giant production of dancers and band and lights, while Apollo dances around him. I guess Apollo reckoned that was enough cardio for him to beat the “strong but clumsy” Russian. From the looks on all the principals’ faces, it looks like this production number came out of nowhere, but – like the Thunderlips match in ROCKY III – you don’t put on a show like this without pre-production, you knobs! Rocky, Adrian, Pauly – even Tony Burton as Apollo’s ring man Duke (renowned for his Noooo’s) – look completely unprepared for this spectacle. Director Sly is once again telling us there is ZERO preparation for a production of this magnitude.

So. Insulting. And. Annoying.

Apollo gets his ass handed to him, and there is some intimation that Apollo maybe wanted to go out this way, as he tragically foreshadowed, “What do we do when the spotlight is no longer on us?” There is a sad moment where bloodied Apollo looks back at his wife one last time. Tears edge her eyes, a look on her face like she knows what he’s about to do; Apollo telling Rocky not to stop the Fight “no matter what,” as he steps to Drago for what he knows will be his final bell. Drago punches, Rocky yells Get the hell outa there, Apollo’s wife yells Stop the fight, Tony Burton yells Noooo! And Apollo falls. Dead.

Carl Weathers has stated that ROCKY III, the previous film, was his favorite, as it humanized Apollo. But after ROCKY IV, it feels like his fanaticism in defeating Clubber through Rocky was some kind of pathological need to be loved by the public. And upon being forgotten by the public, he felt he had nowhere to go except underground. Creed is one damaged mamajama.

Rocky moves to what looks like Siberia (but is actually Wyoming playing Russia) to train and then fight against Drago. On Christmas day. No pay. No title. No dance belt. Even Drago doesn’t get anything out of the match because it is unsanctioned by American boxing authorities. And if the American press is not here – which they aren’t – then it won’t even be reported as a Cold War victory (which is why the Russians took Drago to America in the first place). This match is in a vacuum. Why exactly is everyone here? For the montage of course.

Stallone has said that Drago represented the future boxer, and so while Drago trained in a montage of computers, Rocky trained in the wilderness chopping wood, trees and lifting rocks – going back to basics to defeat the man of the future. There’s a message in there somewhere – probably for people scared of computers.

So sad. No Bill Conti (music is by Vince DiCola), therefore no Gonna Fly Now. Therefore no inspiration for young dudes to go out and do a pushup. 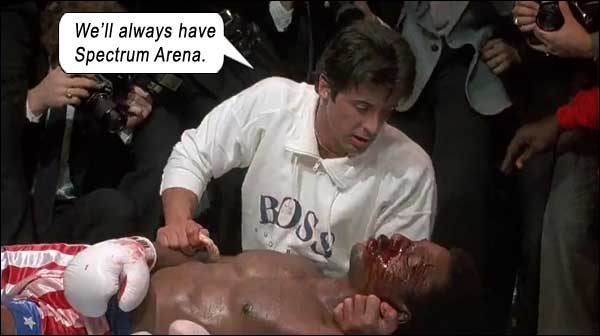 Rocky and Drago enter the ring to the Russian national anthem, sweating profusely. Either they’ve come from a courtesy sauna before the match, or their immune systems are reacting badly to the steroids. Gorbachev watches from the stands and dreams of his romantic nights with Ronald Reagan.

The match is a fracas of no one blocking punches, wrestling grabs, attacking the referee, and punching after the bell. And Tony Burton yelling “Noooo!” (Wait – is that a BONUS Tony Burton Noooo?! We have been truly blessed!)

Halfway through, the all-Russian crowd start chanting “Rocky! Rocky!” Uh, because… No reason. I give up. Then Drago shouts into the chant that he’s fighting not for Mother Russia – but for himself! “For me! For me!” Oooh, that oughta get him shot out in the snow unceremoniously. He proceeds to get his ass kicked American style by the smaller man who was just punched into oblivion. All the cheering for Rocky must have helped. I guess it will be one of the largest “disappearances” of a group of people since the USS Cyclops was lost in the Bermuda Triangle.

Then Rocky gives a political speech about how people can change – because ‘MURRICA! And everyone in the arena loves him – everyone, except the guy who trained Drago; really, he’s the only one who’s hanging his head and wondering if the government will allow it to still be attached to his body tomorrow. Even Drago’s wife loves Rocky, letting him put his stallion into her perestroika in real life. As Rocky drawls about unification, in the background Tony Burton softly cries. But those are tears of joy, for the extra pay he’s getting for that bonus Noooo.

Gorbachev ponders on Rocky defeating Drago, and tears down the Berlin Wall with the help of Roger Waters from Pink Floyd.

No Easy Way Out ♦ Robert Tepper