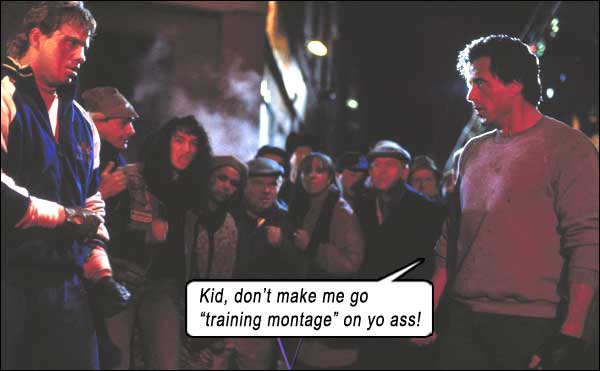 The Patriot that became a Senior Citizen.

ROCKY V is the ALIEN 3 of Rocky Movies. Back to basics.

It’s about Heart. And it’s about Family. Rocky’s enduring heart. And his struggles to understand his family outside the boxing arena.

Facing potential brain damage from his last fight with Ivan Drago (Dolph Lundgren), Rocky Balboa (Sylvester Stallone) begrudgingly retires. Piling insult on injury, he loses his fortune and moves back into the old neighborhood with his family, where he must learn how to deal with what Apollo Creed presaged over the last two films – getting old and irrelevant.

While down financially, Rocky finds spiritual uplift in mentoring an up-and-coming fighter, Tommy “Machine” Gunn (real life heavyweight boxer Tommy “The Duke” Morrison). Neglecting his own son Robert in the process (Stallone’s real life son, Sage, in a terrific debut performance). Due to wife Adrian (Talia Shire) making it clear she wants Robert raised using his brains instead of his fists, Rocky gravitates toward the impetuous Tommy like a surrogate son.

ROCKY V starts with the last few minutes of ROCKY IV, showing Rocky taking massive blows to the head from Ivan Drago (to reinforce the brain damage plot). The first new scene is Rocky coming out of the shower in Russia, directly after the fight, and telling Adrian, while wet and shivering, that his hands can’t stop shaking. He reminisces about his dead trainer Mickey telling him of bouts where sometimes he’d fight so hard he “felt he broke something inside.” The shivering, the hands – Rocky thinks he really broke something this time – or maybe… just towel yourself off after the shower. It IS Russia, dude.

When they land back in the States, the young sandy-haired kid who played Rocky Jr. in ROCKY IV (named, appropriately, Rocky Krakoff) has morphed into Sage Stallone. No wonder Rocky thinks he’s suffering some kind of brain damage. It’s like Michael Gough as Alfred, seeing Batman change from Michael Keaton into Val Kilmer into George Clooney…

To move the plot, the method by which Rocky is divested of wealth is very sudden and a little shark-jumpty, as Pauly (Burt Young) has signed some document that gave Rocky’s accountant power of attorney, who invested all Rocky’s money and lost it. Rocky is told this by two guys who look like lawyers on accounta their office with lotsa windows overlooking the city, and who do line-reads more powerful than a toothpaste commercial. Further, Rocky is prohibited from remaking the money through boxing because he cannot get a boxing license with brain damage (as diagnosed by two guys who look like doctors on accounta their white overcoats).

So although it’s a good story device – stranding the hero with nothing and nowhere to go – it’s done in a slightly unpolished manner.

Richard Gant is mouthy promoter George Washington Duke, hounding Rocky out of retirement, promising he can get licenses, and make Rocky’s fortune back, if only Rocky signs with him. Eventually, after Rocky takes his protégé Tommy Gunn into the big leagues under his tutelage, Duke steals away this person whom Rocky invested his rejuvenated soul in. And Tommy unrepentantly abandons Rocky, insulted for being called “Balboa’s Puppet” by the press. Again, a good plot development, and a tragic moment for Rocky – Stallone’s reaction is heart-breaking when Tommy neglects to thank him after winning the heavyweight dance belt under Duke’s management – but Morrison’s performance of turning on Rocky sounds like he’s playing pretend as the schoolyard bully.

Adrian has become a fleshed out character by ROCKY V, to the point where her actual “character” has changed. Whereas she was initially the shy girl prop, now she is an attractive outgoing woman, Rocky’s equal, pep talking him in III, supporting him in IV, and guarding him ferociously in V. Although I always find it hard to reconcile the fact that her first reaction to any of Rocky’s bouts is “No no no no no!” followed by obsequious submission to the trade that pays her hairstyling bills. Not just submission but downright joy. There’s always something not quite rational with Adrian’s reversals.

There is boxing aplenty in ROCKY V, but Rocky himself never steps into the ring. His one real match is a street brawl against Tommy Gunn. Heart against power. In a few decisive strokes, Rocky puts Tommy down. Tommy recovers, punches Rocky from behind – and it’s ON! We see both Rocky and Tommy use a whole swathe of street moves on each other in a rule-less dustup. Master against student in a battle to the anti-climax. 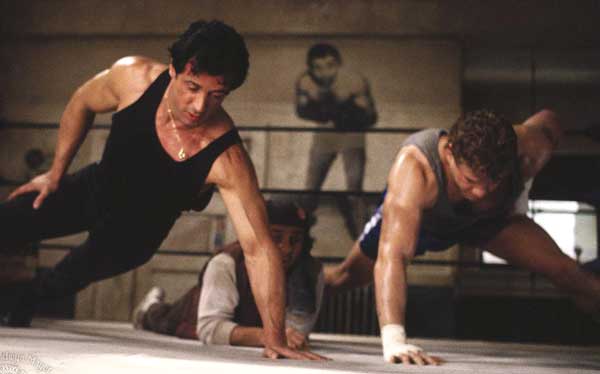 The Master shows the Student how it’s done: how to wear slimming black and still look fashionable.

ROCKY V is stripped of the blitz and blam of the last two entries (III and IV, both written and directed by Stallone) and reverted back to the “street” ethos it retained in ROCKY and ROCKY II. Stallone still screenplays, but hands over the director’s chair to the man who helmed ROCKY, John G. Avildsen. So V looks a little “tougher,” and plays a little tougher with its storyline about facing adversity and loss.

Mickey (Burgess Meredith) is long dead, but makes a new flashback appearance, where he is made to exhibit a sentimentality his original character never had. This is for the device of giving Rocky a memento – a tiny boxing glove on a chain – so that Rocky may now give that memento to the person he values most…

I salute Stallone for trying to do something original, meaning keeping Rocky’s action right out of the ring, and not feeling the need for a title fight, instead pitting Rocky against a fighter who stands for different values. It is a well-constructed story, with analogies between Rocky’s kid taking on bullies at school and Rocky taking on corporate bullies. (And I think Stallone was just aching for a chance to use the same dopey drawl from the original ROCKY.) It’s just a little untidy and it defies viewers’ expectations of a ROCKY film (not in a good way).

Rocky’s ringman, once Apollo’s ringman – Tony Burton as Duke – is not in this installment, except for a few minutes at the beginning when the team arrives back from Russia. Yet there he is in flashback during the final fight, yelling “Noooo!” Come on, there’s gotta be some bonus points for that magical appearance!

Like the last two ROCKY films that lacked grip because they had nothing at stake except the ego of the protagonist, V also has absolutely nothing at stake – no title, no dance belt, no money, not even the protagonist’s ego, because Rocky is fine with adapting to life as a regular guy, without money, fame or Pauly’s sex-robot. At stake seems to be Rocky’s mental well-being, that if they pull him back in, he’ll die a quivering neurological death. But that’s really too abstract to get our teeth into. Is the movie saying boxing – like cigarettes – is bad for your health? At times, it seems like the movie itself is trying to stamp out the boxing /gladiator element that made the series so popular, replacing that sweat-drenched ethos with a family-first ethos.

The two “sons” of Rocky would suffer tragic fates in real life.

Sage Stallone (1976-2012), a remarkable young actor showing some real chops at 14 years old, would go onto a few more acting roles and start a directing career, only to die of a heart attack in 2012, aged 36.