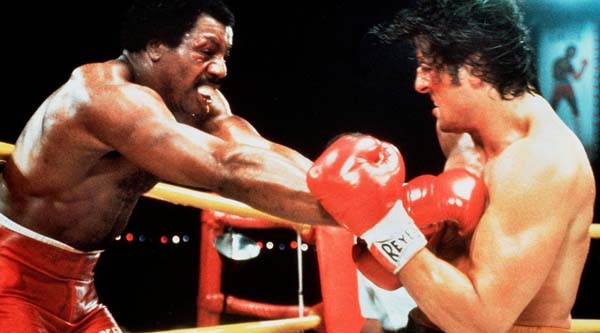 When the fight devolves to girl-pushing, it’s all over.

The Underdog that became a Stallion.

That epic fanfare, a giant name floats across screen – ROCKY. Movie opens in elation, as we fly with Bill Conti’s soon-to-be-immortal theme, Gonna Fly Now, and then suddenly comes crashing to Earth–

— a small-time boxing match, a pudgy, young and decidedly graceless boxer belts it out with a bigger truck of a guy. Bloody and sweaty in their dungeon dressing room after the match, the two boxers receive their payment from the manager, deducting his fees for “shower and towel,” locker and commission, until the pudgy boxer comes out with a little over forty bucks. He asks, “When do I fight again?” “Maybe two weeks. Gimme a call.” The boxer walks home on grim urban streets, and feeds his pet turtles while talking to them.

An inauspicious start to one of the greatest legacies Sylvester Stallone has bequeathed to Earth culture: Rocky Balboa – the world’s most lovable… loser.

Due to its six sequels (II, III, IV, V, ROCKY BALBOA and CREED), we think we know Rocky, but we’ve retconned him in this first seminal underdog movie. That uplifting theme music has been fooling audiences for decades now. But see for yourself, Movie Maniac: Balboa is an ignorant boor, a rudderless thug, full of indecision and negativity, and he loses to Apollo Creed in the climactic battle. But ROCKY is not about winning or losing; it’s about “going the distance.” 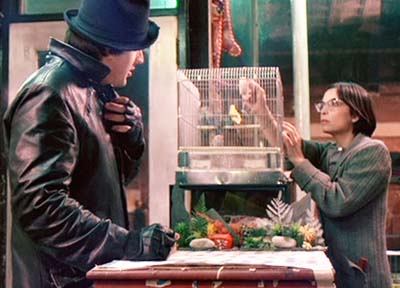 “Yo, Adrian. Save summa dat hot tender lovin’ care for me!”

Stallone is that pudgy young boxer, Rocky, who gets by on small-time club bouts in Philadelphia, working at the local gym swabbing floors for Mickey (Burgess Meredith), and being the muscle for the local loan shark, Gazzo (Joe Spinell – you know him as Cicci in THE GODFATHER PART II). In a 4th of July publicity stunt, the world heavyweight boxing champ, Apollo Creed (Carl Weathers) chooses Rocky as his contender – “a local Philly boy given the opportunity for the greatest title in the world.” And all inspirational movie breaks loose.

Surrounded by a cast of colorful characters, everything about Rocky exudes Loser. Acerbic gym owner Mickey never has a kind word for Rocky (“You got heart but your fightin’ is a goddam heap!”), maintaining that Rocky squandered his skills as a “two-bit leg breaker”; Rocky himself has a lazy attitude about moving up from his station in life – when asked by the promoter if he would like to fight Creed, he declines. The colorful characters are also people who might have had a shot, but lost: Mickey himself, Gazzo the shark, the guy who owed money to Gazzo (whose thumbs Rocky should have broken), the barman, the guy in the puddle of piss outside the pub (whom Rocky kindly lifts back into the pub)… There is that line of thinking that if you are surrounded by these “types,” it is hard to break out of the circle of their influence. You become one with them, a loser.

The one bright light in Rocky’s life is Adrian (Talia Shire, hot off THE GODFATHER, Parts I and II), a shy plain girl who works at a pet store, sister to one of Rocky’s acquaintances, Pauly (Burt Young), another desperately lonely loser unsatisfied with life, whose methods of dealing with misunderstanding or family crises is to lash out. (His hand gestures are priceless!) Rocky’s flowering romance with Adrian would be the heart that drives this movie and Rocky himself, but no one will see past the punching. 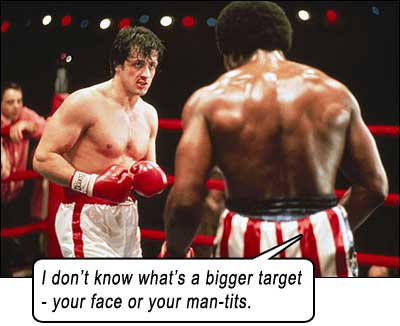 Carl Weathers is Apollo Creed (styled after Muhammed Ali’s big mouth), the wealthy champion stud, with an entourage of yes-men, publicists and managers.

After Rocky is publicized as the contender, suddenly dismissive Mickey wants to train him. Such a great performance of pathos, as Mickey asks to be Rocky’s manager; we feel the desperation in his voice (the last shot at glory from a spent man), and we can feel that last hope slip away from him as Rocky turns him out, angry that Mickey never believed in him enough to even keep his locker space at the gym. In one respect, Mickey is right – that Rocky never made anything of himself with his natural ability. And when Rocky gets a break into the big time, Mickey is still right – that Rocky needs a manager. And Rocky is morally right to be outraged – that only when he gets the breaks do people give him the time of day.

In the reconciliation scene, we see the beauty of John Avildsen’s non-intrusive directing, as he holds a long shot, as we watch Mickey sadly shuffle away from Rocky’s apartment into the night, with Rocky ranting from within, about his house being stinky. Under the soundtrack, Rocky runs out, chases Mickey. Mickey turns at the last minute – flinches – until Rocky quickly puts an arm around his shoulder in reassurance. We don’t hear what they say, we only see Rocky move away happy. It’s all in long shot, yet such emotion in that soundless encounter.

Also proving what a great actor Stallone is. With this role, he convinced the world he was a doofus. Rocky is not very bright and his delivery is drawled, the content of his dialogue littered with lowbrow observations and kitchen philosophy. And lord knows his incessant yapping in attempts to get into Adrian’s panties is insufferable. But having written the script, Stallone knows exactly what he’s imparting through all these characters. This is no sloth. This is a guy playing a sloth.

Stallone did not create the underdog movie, but ROCKY surely was mightily responsible for forging the “inspirational movie” flow chart and its many tropes. Was this movie the first to have a “training montage”? Before the iconic fanfare heralding Rocky’s readiness, we see the iconic scenes of him drinking raw eggs and the pre-dawn run in the gray tracksuit, ending by puffing up the stairs of the Philadelphia Art Museum. He holds a stitch in his side as he limps down them. (The Steadicam tracking Stallone up the stairs was created by the operator Garrett Brown, and it was only the third major motion picture to use this tech.) 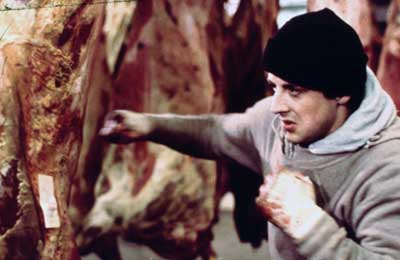 There is also the iconic scene of Rocky punching sides of beef, which comes about by Pauly getting mad at Rocky, “Are you screwing my sister?!” and punching a beef side in anger. Rocky moves Pauly aside and tentatively hits the beef. Then he goes to town on it, serving two purposes: strengthening his knuckles, and putting Pauly in his place. The rest is history. It’s these small things that make the movie the juggernaut it is. For those who came for the boxing, there is very little – just two matches, one low-end bout to open the movie, the other at Spectrum Arena against Apollo Creed, to close the movie. Creed’s ringman is real-life boxer, Tony Burton, whose job is to yell “Noooo!” in slow motion.

By the time Rocky is doing one-handed pushups and sprinting to the art museum up the stairs, the training montage and its attendant fanfare have beaten us into submission. Okay, okay, he’s a lionheart for training like he should’ve been training all along.

Rocky gives the film’s key monologue in a Garden of Gethsemane moment. During his greatest doubt (“take this cup away from me”) he realizes that if he can “go the distance” then he won’t be just another bum from the neighborhood.

Thus, after the match, the announcement of the winner is secondary to the fact that Rocky lasted the full 15 rounds. Though he loses the match, it is “going the distance” that made him a hero in the eyes of his fans. And the movie public – too incognizant to hold nuance in its collective brain – simply attached the “winner” tag as well. We can hardly hear the “split decision” over the soundtrack, the crowd, and Rocky screaming the iconic, poignant-yet-comical, “Adrian!!” She returns the cry with “Rocky!” as she runs to him through swarming bodies. Whereupon we hear from him, “Adrian!” And on it goes – “Rocky!” “Adrian!” “Rocky!” “Adrian!” – like two gibbons trying to locate each other in the rainforest to mate…

So let’s get this straight in our heads after 40 years: this icon whom the junkets tell us fought his way to the top, was actually a loser who was given the opportunity as a contender by pure chance. He rose to the occasion not through hard work, but innate skill. By Mickey’s estimation, he trained only as much as any regular fighter, while we see Apollo training like a maniac. In the final telling, this means that PURE LUCK set the wheels in motion and INBORN SKILL saw him through the ordeal. Even though the movie frames it as a villain versus a hero, the hubris of Apollo and the hunger of Rocky don’t enter into the equation, because neither of those elements was instrumental in the final fight. It was LUCK and SKILL.

And this unlikely fictional “hero” became such a cultural phenomenon (winning the Oscar for Best Picture in 1977) that Rocky supplanted real-life boxers as the high water mark by which all boxers are measured. Muhammed Ali was old news; no more Joe Frazier (who cameos in the film) or even Rocky Marciano! People would mean Balboa when citing being “as tough as Rocky” or “Get him ‘Rocky’!” or “the guy thinks he’s Rocky or something”…

Shhh. Don’t tell anyone he lost…

When two men get into a boxing ring… we ALL lose.

Has everyone lost their minds when it comes to treating boxing as a “sport”? A “sport” where you are required to beat each other about the head, hoping to give your opponent enough head trauma to become unconscious! Hoping that your opponent will get a concussion, and won’t be able to stand anymore, thereby decreeing you the “winner” of the competition; a “sport” where you are trying to addle your opponent’s brain, causing it irreparable damage – as the object of the “game.” We could go into the psychology of why watching other humans beat each other to death is cathartic and serves to decompress the violent urges of society, etc. but on an individual level – Are you people fucking NUTS?!

At one point in the Apollo-Rocky bout, the commentator is lustily narrating how Apollo is “spitting blood.” Well, isn’t that cause enough to ambulance the man to a hospital? Not continue to watch him take a beating – you swine!

If you want to be a sportsman, why not running, or tennis, or swimming or even golf, fer cryin’ out loud?! Why has competitive “boxing” – which probably once served a very real function in small agrarian societies – come down to us in this form, commercializing brain damage? And what are all you people thinking, supporting it with such humor and normalcy and casual acceptance of forced retardation and crippling?