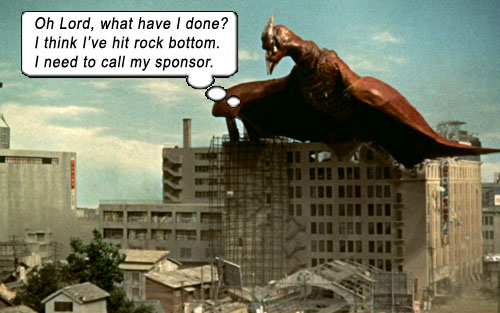 Prehistoric Pteranodon destroys Japanese city. Military weapons have no effect on it. Burying it under a volcano works though. Such is the prosaic plot behind RODAN, a Japanese monster movie made while Godzilla wasn’t looking.

The movie itself has its strong points, due to the talent involved – literally, the full team that brought us the original and best GODZILLA (1954): director Ishiro Honda, writer Takeo Murata, producer Tomoyuki Tanaka, and even composer Akira Ifukube. The new beast they belch forth, RODAN, is not as epic and tragic a figure as Godzilla, but its debut here is far from the swill Toho Company would later churn out like dog poop through a sausage maker.

Written like a mystery thriller, and constructed along the eerie lines of the American horror production THEM!, Rodan does not even appear until the 50-minute mark of this 74-minute film! And then we get two of him! (Purely for the tear-jerking ending, as you will see.)

It’s always dicey watching the American edit of any Toho Company film, and RODAN doesn’t escape the editor’s sharp, stupid knife, as U.S. Production company The King Brothers inserts over 4 minutes of hydrogen bomb test footage as the intro – which has nothing to do with the rest of the movie. In GODZILLA, the American edit excised all references to America and the H-bomb; now they seem to want to crow their stunning achievement in death and debilitation; in poetic flourishes that display incognizant bluntheadedness and a jaw-dropping hubris. (It’s the same soulless indecency and criminal stupidity exhibited by George W. Murderer and his Pimp Cheney illegally torturing prisoners and then congratulating themselves in public for doing so – and remaining free. Nothing’s changed.)

So do we surmise the H-bomb spawned Rodan? But nowhere else in the movie is the H-bomb mentioned; Rodan is identified as a prehistoric creature that was hibernating in a deep volcano, and only the interference of mining so deep roused him from his egg.

Also in the American edit, we have to put up with lead character Shigeru (Kenji Sahara) narrating – an American dubber putting on a Japanese accent, and speaking for this character, who doesn’t have narration in the original film.

Like THEM, early scenes where people are disappearing are eerie, but – also like THEM – only until the monsters are revealed; until that giant caterpillar shambles around the corner and we giggle, because we see it’s just two guys in a caterpillar suit like a pantomime horse (one guy in the front thorax and another guy in the back thorax).

And what eats giant caterpillars? Why, a giant bird of course! But we spend the whole second act not knowing what it is – Rodan first appears as a mysterious supersonic “UFO,” outracing jets and destroying them, then toppling bridges and buildings. The mystery unfolds slowly, with good use of flashbacks. When we eventually see the giant bird, it is effective, because we know the power it possesses.

The somber young Akihiko Hirata (who played tragic, eye-patched Dr. Serizawa in GODZILLA) is the lead scientist. But he is not like the conservationist Dr. Yamane character in GODZILLA – there is no heft given at all to keeping the Rodan creature alive for study or conservation. This movie is purely humans-good, creatures-bad.

Cue toy planes. When the toy planes fail, bring in the toy tanks! When they too fail, blow up the volcano where the creatures live. Padding explosivus maximus. Then the climactic moment, which I’m sure must have been played more poignantly in the Japanese version: one Rodan catches on fire and falls to her death on the lava. The other Rodan, rather than leave his mate’s side, tries to save her but is also engulfed in flames.

I’m giving this version a pass because I’ve seen how horrendously American edits butcher Japanese movies, but I believe the Japanese team wanted to play this creature the same way they played Godzilla being shaken from his home and retaliating; blameless nature at the hands of technology, etc. None of this comes across in this version of the film, but I’m sure that thematic content is on some American cutting room floor, otherwise why bother inserting that U.S. bigdick explosion in the front of the film?

Toho Company would later connect Rodan to Godzilla. And all hope was lost…