Any movie that is such homage to KISS can’t be all that bad. KISS is, after all, the role model for four generations of rock bands. 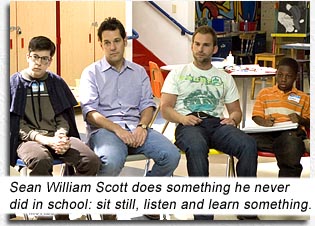 David Wain directs ROLE MODELS adequately, from a story written by Paul Rudd, Wain himself and a few others, about energy drink spokesman Danny (Rudd), who travels from school to school with his mascot Wheeler (Seann William Scott), who one day goes postal and is assigned community service along with his mascot.

They end up at a mentoring school, run by demented Jane Lynch, Rudd taking on a nerdy teen with a craze for medieval role-playing (Christopher Mintz-Plasse, still McLovin), Scott assigned a young black kid with a big mouth (Bobb’e J. Thompson, a little keg of dynamite). Effectively teaming the alienated adult with the alienated kid and the outlaw adult with the outlaw kid.

Elizabeth Banks is Rudd’s ex-gf and lawyer, simply glowing like she’s just been tapped by KISS.

Plot follows Rudd and Scott as they arc toward becoming real mentors, rather than simply doing their time for the state. It’s mildly funny and mostly vacuous, the most fun coming from all the KISS references.

And like I said, any movie this rife with my role models can’t be all that bad. Or maybe it can.