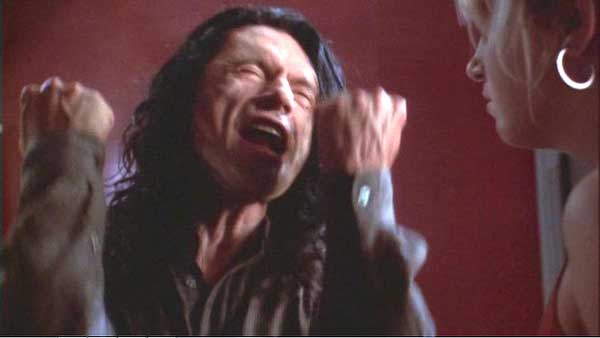 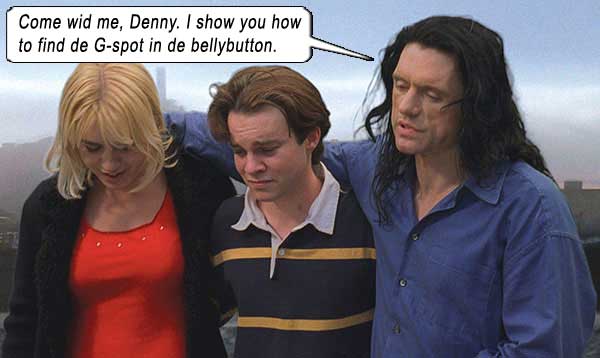 It is not a good film! It is naaht!

A scheming whore and a bad actor circle the drain in THE ROOM.

Strange visitor from another planet, Tommy Wiseau writes, directs and stars in what has become infamous as “the worst movie ever made.”

Johnny (Tommy Wiseau, who looks like a holdover from a Sunset Strip metal band in the early ‘90s) is a banker or something, don’t worry about it, who comes home to his girl Lisa (dowdy blonde Juliette Danielle) and has sex with her in the bellybutton. Their creepy young friend Denny (flopsy-haired Phillip Haldiman) asks permission to stick around for the sex scene: “I just like watching you guys.” What the hell? We uncomfortably ask ourselves whether Denny has no filters, or whether he’s slightly retarded. (Denny seems to fulfill the role of Sal Mineo in REBEL WITHOUT A CAUSE, the ambiguously gay young ward of the leading man, who kept falling into “innocent” three-way rumbles with James Dean and Natalie Wood. This similarity will become more apparent when Wiseau tries to do James Dean later.)

Lisa seems content to be screwed incorrectly, but when her Mom (Carolyn Minnot) visits later, Lisa moans that she doesn’t love Johnny any more. Apparently, Mom has breast cancer, but don’t worry about it.

Lisa seduces Johnny’s best friend Mark (Greg Sestero, whose acting is so bad that even though he has a real beard, it looks glued on). Mark resists Lisa’s advances at first because she is Johnny’s fiancé, and Johnny is his best friend. But they split the difference and do it on the stairs where it’s uncomfortable. And Greg can reach her bellybutton easier.

The 4th sex scene, between Lisa and Mark, looks more natural because Mark’s aim is a little better, as he impregnates Lisa’s thigh. It would be a real turn-on if Mark would just stop moaning like a bitch.

The 5th sex scene, between Lisa and Mark, is interrupted by Mark’s fake beard falling off. I don’t want to talk about it.

There is even a 6th sex scene that involves the hottest chick in the movie, Robyn Paris, and a dork with frosted hair that I wouldn’t mind punching into a coma, and Lisa’s Mom, who finds dork’s underwear. 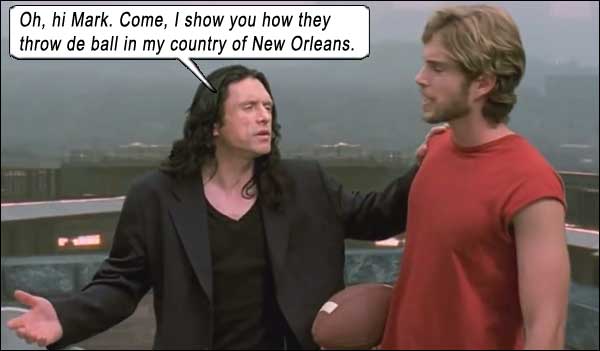 Between sex scenes, everybody congregates on the roof of the apartment building. So much so that we wonder if there wasn’t a typing error and this movie’s actual title is THE ROOF.

Written, produced and directed by Tommy Wiseau (so he is responsible for the unbelievable lack of everything), and made on a reported budget of six million mysterious dollars (the source of which Wiseau is still cagey about in 2017), THE ROOM is filled with terrible looping, cringeworthy dialogue (“You’re tearing me a-PART, Lisa!”) unnecessary lines (“I’m gonna do what I wanna do. What do you think I should do?”), scenes that mean nothing and go nowhere:

… and is a showcase for Wiseau’s zen:

In a frothing cauldron of inept performances, Wiseau is a standout champion, with his ambiguously-Euro accent (he swears he’s from New Orleans), obtuse mismatched line-reads to emotions, his insufferable little laughs (which can only be described as chortling), down to the way he throws a football. (In trying to pander to the American male ego, scenes of Wiseau and buds tossing the pigskin around are almost as ubiquitous as sex scenes, but Wiseau’s womanly throwing style only proves he has never touched a football in his life).

Mom visits, and Lisa lies that Johnny got drunk and hit her last night. We can see the semblance of a plot forming. But then it doesn’t. Hi doggie.

Mom says she’s going home. CUT TO: Mom, and everyone else, on the roof, saving Denny from a ferocious drug dealer. Johnny and Mark drag the dealer away. “Let’s take him to the police!” (It must be noted that Dan Janjigian as the dealer “Chris R” is possibly the standout performance in the film. That’s no joke. This guy might have had a future in acting had he secured a connected agent and a few acting lessons, but alas, his fate would mirror everyone else’s in this production – obscurity.) After five minutes of Lisa overacting over Denny, replete with tears streaming down her face in a performance that won’t get close to an Academy Award, suddenly Johnny and Mark return. I guess the paperwork was light down at the police station that night.

Johnny becomes suspicious of Lisa and complains to a psychologist friend: “We didn’t make love in awhile”— dude, wasn’t that your pasty body humping her bellybutton twice in the first act? Oh, he probably meant making love in the vagina.

Trying to do one invisible chin-up is tearing him apart!

Johnny speaks to himself in what we might consider the titular “room” (that lounge room that they keep entering and exiting, that looks like it smells as oily as Tommy’s hair): “I don’t believe it. I show them. I will record everything!” Immediately a cassette player (that’s an olden days iPod, kids!) appears out of his pocket, like a cartoon. Then he holds up a cassette tape (that’s an olden days mp3, kids!), and spends five laborious minutes, filming every second, meticulously connecting the tape machine to the telephone (that’s an olden days iPhone, kids!). Then he presses RECORD and hides it. I guess there’s enough space on that 45-minute tape to record a few hours of dead silence before Lisa gets home and uses the phone.

It all comes to a head after Johnny’s surprise birthday party, where so many bad actors are all gathered in one space together that Johnny goes on a “rampage” by gently trashing his Room and taking his own life.

Terrible filmmaking to the very last second, Lisa had argued with Johnny and left for Mark’s place. After Johnny shoots himself, both Lisa AND Mark come into the bedroom and find Johnny’s body– so she was bringing Mark back to Johnny’s apartment after their argument? Denny barges in – already crying, mind you! – and shouts at Lisa and Mark, “Leave us!” You’re telling Lisa to get out of her own apartment? We hear sirens in the distance. They just discovered him. Even if they called the authorities as soon as they walked in, the ambulance would have to teleport to get there as fast as it did. He ended up in a hospital on Guerrero Street. 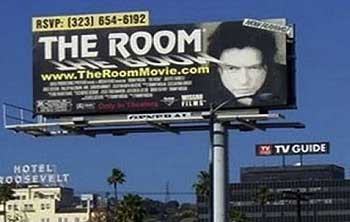 This billboard was up so long, it became a part of the skyline. I always thought I was missing out on something by not calling that number. I was wrong.

The more you delve into THE ROOM, the more intriguing it gets. There was that famous massive billboard, facing south on Highland Avenue (south of Hollywood Blvd.) in Los Angeles for over five years, showing Tommy’s lazy-eyed face that could melt grout. How did he pay for this? THE ROOM only made $1,800 upon its 2003 release in two cinemas, before it was pulled.

Tommy’s age, his background, his finances, his accent – all still enigma. And he keeps changing his origin story whenever it suits him. He says he raised the movie budget selling jackets and jeans. He’s not fooling anyone.

It could be argued that many contenders for actual “worst movie ever” can be found in the annals of MYSTERY SCIENCE THEATER 3000 (MANOS: THE HANDS OF FATE, THE CREEPING TERROR, ATTACK OF THE EYE CREATURES, the Coleman Francis trilogy, etc.). All these movies – like THE ROOM – suffer low budget, zero production values, haphazard writing, horrendous acting, looping and continuity, but unlike the MST3K duds, THE ROOM is still being screened as a cult favorite 14 years after its release, in cinemas across the United States and around the world, much like THE ROCKY HORROR PICTURE SHOW. (We must clarify that ROCKY HORROR is actual intended camp and is a quality production.)

Wiseau has cashed in on the unintended cult audience, making numerous public appearances in his “cowboy-vampire” persona to promote screenings (I guess the dyed hair and dark shades hide your age, but are the triple studded belts really necessary?). And his celebrity has only risen with the 2017 release of THE DISASTER ARTIST, James Franco’s movie about the making of THE ROOM. True to form, Wiseau’s stance on his film has changed from being a drama to a comedy. He’s not fooling anyone. But does it matter, in this social media world devoid of facts? He’s famous. And that’s all he ever intended. 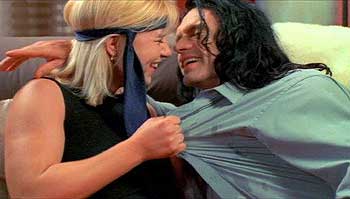 When the drink flows and the clothes come off – it’s bellybutton time!

Becoming infamous for its lack of moviemaking aptitude doesn’t make THE ROOM any better a movie in retrospect. For all those newbies lining up expecting a life-changing cinematic experience, leave your stupid comments in your pocket. Where do we draw the line on wearing ironic t-shirts of Tommy shouting “You’re tearing me apart, Lisa!” and actually promoting ineptitude? THE ROOM is like THE HUMAN CENTIPEDE or STAR WARS – a cultural phenomenon; you’re watching it to partake of a social experience, not view a movie per se.

The funny thing is: you can see Wiseau is paying nominal attention to the mechanics of movie-making, such as framing, pans, moving into closeups; he’s got the establishing shots of San Francisco (not that it makes one lick of difference where this somnolent story takes place); he also shoots “camaraderie” scenes between the best friends, so that their breakup will be more intense; and anyone who doesn’t see that is a chicken chip chip chip chip.

Just before Johnny announces, “We’re expecting!,” amidst the swirling piano motif of Mladen Milicevic’s soundtrack, suddenly a snatch of Beethoven’s Sonata No.8. Is this a subliminal reminder of this Sonata’s alternate title, which also describes the movie – Pathetique?