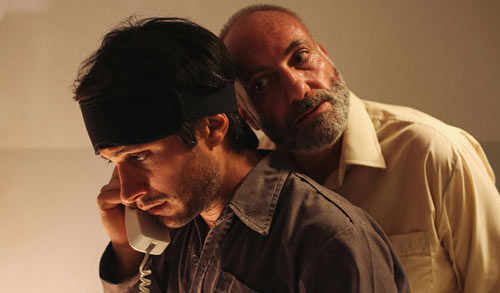 Boy, Iran sure can learn a thing or two about torture from America!

Jon Stewart (THE DAILY SHOW) directs ROSEWATER, a stark recounting of the kidnapping, torture and release of Iranian-Canadian journalist Maziar Bahari in 2009.

There never needs to be any reason behind political kidnapping and torture (as evidenced by Boss America’s countless examples) but this particular k&t had an extraordinary rationale – which was at first damning for Bahari and ultimately fortuitous: a writer for Newsweek, Bahari (played by Gael García Bernal, BLINDNESS) was arrested June 21, 2009 because Iranian authorities believed him to be an American spy, and one of the pieces of “evidence” they showed him to corroborate their accusations was an interview he gave to Jason Jones of THE DAILY SHOW! (June 17, 2009, Behind the Veil – Minarets of Menace. Jones and Bernal recreate that interview from a behind-the-camera view.)

This truth-stranger-than-fiction nugget would get DAILY SHOW Grand Poobah Jon Stewart involved after Bahari’s release in October 2009, after 118 days of bullying, beatings and blindfolds.

Stewart’s “guilt film” depicts Bahari’s inhumane treatment by jailer Javadi (Kim Bodnia, whose naturalistic acting makes him all the more terrifying) and his superior Haj (Nasser Faris, a doppelganger for Bodnia), who is the “good cop” to Javadi’s “bad.” But where is the waterboarding? Where is the sleep deprivation? Where is that favorite of American dunce-soldiers who get away with murder – electrodes to the nuts? Someone call that terrorist Dick Cheney for advice on how to torture properly, would you? I mean, this is torture that even Sean Hannity could endure!

Granted, Stewart actually remarks that he didn’t want his movie to turn into “torture-porn” like PASSION OF THE CHRIST or any Rob Schneider film. But still… the fact that Bahari survived to tell the tale somehow dilutes the magnitude of the torture. It’s our human nature not to be able to empathize after the fact. When I serpentined through the valley of death in August 2014, I realized: we all die alone, no matter how many friends, no matter how many lovers, no matter family or financial benefactors, no matter how much help or psychological support received from any of them, no one can experience the razor-madness depth of your pain – except YOU. 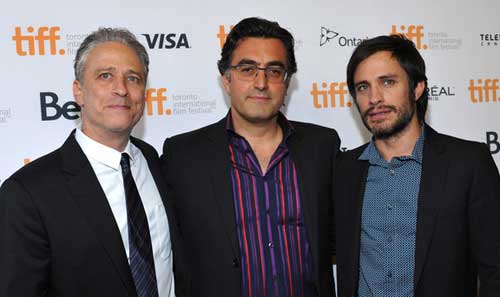 Stewart’s first directorial effort is astounding. Though he never scaled the heights as an actor, as a fake-news/talk show host, he has no equal; now he comes to the director’s chair fully formed, displaying the finesse, creativity and control of a master. Stewart also screenplays, from the book by Bahari and Aimee Molloy, Then They Came For Me, 2011), filming on location in Jordan, constructing the tale to alternate between Bahari’s current imprisonment, and flashbacks to his childhood with Bahari as a boy visiting his family in jail (Golshifteh Farahani as his sister and Shohreh Aghdashloo as his mum, channeling Anne Bancroft). The blindfold is the connecting tissue.

With Stewart exiting THE DAILY SHOW (August 2015), we can only hope he pursues a career as director. Imagine someone so informed, legitimate, cynical and humorous (and demonstrating here he is more than capable!) creating sincere product, unmindful of the Hollywood meat machine. If so, I wait with bated breath for his next offering!

We see the 2009 Iranian presidential protests, which Bahari was covering for Newsweek. Remember that pure-waste-of-time Purple Finger Day all the news programs crowed about in America, as if their previous administration’s murderous and financially-destabilizing foreign policy in the Middle East was instrumental in “attaining democracy” for Iran? Remember those Iranian people holding up their fingers to news cameras as if their vote actually counted? Remember how incumbent insane person (and president) Mahmoud Ahmadinejad simply walked away with the election in a landslide? Which means:

EITHER America failed to “spread democracy” which is how Ahmadinejad stole the election, OR America succeeded in spreading democracy and Iranians elected Ahmadinejad fair and square. (But America wanted it both ways, claiming they had spread dat democracy – look at those purple fingers! – but dat debbil Ahmadinejad cheated on the election! Cognitive dissonance reigns supreme!)

Bahari’s pregnant wife (Claire Foy) would tirelessly seek his release, eventually involving the big C – Hillary. You don’t want the biggest corporate mafia thug in the world as your enemy, so they had to release Bahari – with one last directive: (get this!) he was to spy on America and report back to them! (These guys are more hubristic than American torture pimps Alberto R. Gonzales and John C. Yoo! Maybe they learned something from America after all…)

Now I’m not one of those bleeding-heart liberals who “doesn’t believe in torture.” Torture has its utilities. “Torturer,” unlike the words “attacker” “assailant” “assaulter” “beater” “bludgeoner” etc. implies a kind of glee in the pain-giving, almost schadenfreude. So it should only be used when speaking of revenge. Sweet revenge. I could not bring myself to torture anyone without evidence, or premeditatively for no reason other than “orders.” I could not torture for information. But if someone actively does detriment to the human condition and they know better – like spreading disinformation about beneficial political policies, calling them “death panels” and such, like encouraging fundamentalist fanatics to kill doctors who provide legal abortions, like painting criminals as victims because the opposing political party is calling for their incarceration – then I could definitely torture that someone. For all the indirect, premeditated agonies that person has inflicted upon countless others, that person deserves every blood-curdling heartbeat of retributive punishment.

Sean Hannity Volunteers
To Be Waterboarded