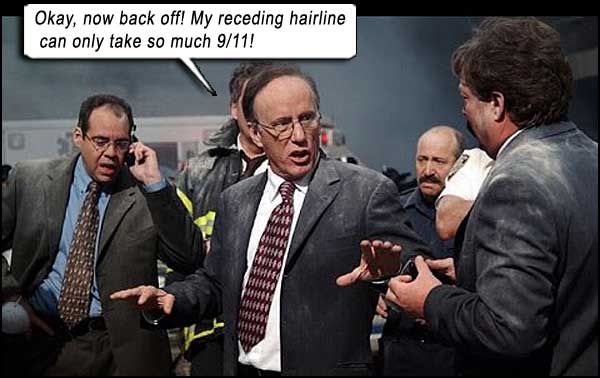 Rudy Giuliani – there’s only three things he mentions in a sentence: a noun, a verb and 9/11.”
— Joe Biden, Democratic Candidate for President, 2008.

In 2008, Joe Biden would aptly describe Rudy Giuliani’s tactics for his presidential candidacy. And this 2003 film, RUDY: THE RUDY GIULIANI STORY, does exactly the same: a character-driven scene, a policy shouting match, and 9/11!

Actual footage of 9/11 clutters this TV movie, rooting it solidly to the event that defines Rudy Giuliani’s latter career. (On THE DAILY SHOW, Jon Stewart would joke about Giuliani getting a royalty check every time someone says 9/11.)

9/11 opens the film, 9/11 closes the film, and even though most of the film is in flashback showing Rudy’s officious rise to political power, the film constantly cuts back to – 9/11. And why not? Rudy’s been eating out on 9/11 for the past 17 years. When, as New York Mayor, Giuliani’s favorability numbers were tanking somewhere around 21%, along came the razing of the World Trade Center on September 11, 2001 aka 9/11 to save his bacon. He became “America’s Mayor.” He was the Time Magazine Person of the Year. And he exploited one of the greatest tragedies on American soil to run for President of the United States…

When someone old, ugly and fat proves their idiocy in such a strident manner, as Republican Rudolph Giuliani did in 2018 with his loose-lipped lawyering in support of Dumbo Donald Trump, it is hard to remember that once, all these bald, obese, unprincipled fucks were once young, vital, intelligent men, who had sex drives and ethics and attractiveness. Well, RUDY doesn’t go so far back that Giuliani becomes attractive; rather, starts at the grossness level of James Woods.

Woods plays Giuliani as a man so principled for justice (“Democrats always talked about things getting better. Republicans did whatever they could to make them better!”) that he makes Penelope Ann Miller juicy for his balding, runnel-faced raconteur. Miller would play Giuliani’s new second wife, TV host Donna Hanover, and together they dance and laugh and kiss gruesomely. (Sorry, but it’s really really hard to envision that anyone would find Rudy Giuliani attractive enough to put their mouth on his face, and I come away bilious.)

Opening scene shows Rudy in a limo being driven around New York by a pudgy liege who looks unnervingly like Sam Nunberg (the cannon-mouthed gimp questioned in the 2018 Mueller Russia investigation re. Kremlin puppet Roger Stone).

Four minutes in – 9/11! The intercutting of real footage is edited well. We don’t sense too much of a disconnect between Woods re-enacting Rudy on the street and the real chaos.

Then we flashback to 1982, lawyer Rudy being interviewed by Donna on TV (Miller sounding like she’s reading her lines for the first time). Rudy reveals his deepest, darkest secrets to the strawberry-blond, wide-eyed Donna, that he was once a Dem, his heroes, Churchill and Bobby Kennedy. (So what happened?) This apparently makes her hot enough to put her mouth on his face… 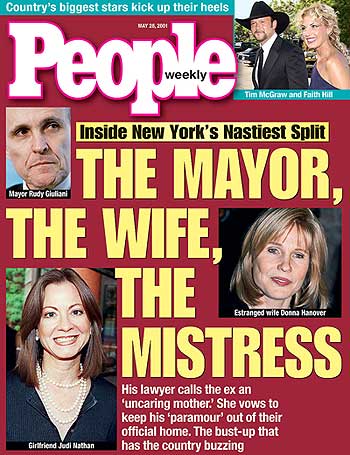 From a book by Wayne Barrett, directed by Robert Dornhelm (ANNE FRANK, 2001), movie portrays rowdy Rudy as energetic and canny, rocketing through Giuliani’s legal accomplishments in New York, as he faces down mob guys on the docks, lunches with informants, and shouts at his underlings. A montage of mob guys busted on RICO charges (Racketeer Influenced and Corrupt Organizations); his “broken windows” policy; his losing race against Democrat David Dinkins for the 1989 Mayoral seat; his philandering with his press secretary, Christyne Lategano (Michelle Nolden, with a body built for sexual favors)… It’s funny, back then Rudy was so intensely against mob guys like Joe Bonanno, Paul Castellano, the Genoveses, the Gambinos – and nowadays he’s working hand-in-glove with international gangster Vladimir Putin, and with Putin’s puppet, Dumbo Donald.

Rudy makes a big deal about his anti-abortion stance “because he’s Catholic,” but then – what about adultery, Your Honor? As usual, Rudy’s wife is used as a prop to complain that he can’t make it to dinner because of business meetings, and to storm into his office and discover him with his mistress and whine about marriage vows.

In July 1994, Giuliani is sworn in as mayor. (They even include some re-enacted footage of his crazy little son at the inauguration stealing the show!) Towards the end, we see him battle prostate cancer, and hook up with Wife #3, Judith Nathan (Kirsten Bishop).

RUDY keeps flashing forward to 9/11, and we see Giuliani give an epic speech about cleaning up after the rubble. At the release of this movie in 2003, Giuliani’s cache was still high, so he is unequivocally a hero, as he gazes at the Twin Towers brought low, “What have these bastards done to my city?” (Did he really say that? James Woods makes it so.) Giuliani would pass himself off as a steadying presence during the heady, emotional chaos of 9/11, and many of us would believe him. Until he overplayed his hand grasping at the Oval Office, and enough evidence came out to illustrate how he was merely a douchebag in the wrong place at the right time.

Movie doesn’t tell us that Giuly was only walking the streets with firefighters (and getting photo-opped left and right) due to his flawed decision to locate his Emergency Operations Center on the 23rd floor of 7 World Trade Center – which was razed on that day. So he had no EOC to regroup at! (Giuliani overrode the advice of security and terrorism experts to locate the EOC in a building that was already a terrorist target, and had been attacked in 1993; there were issues with diesel fuel storage, backup generators, and many other weaknesses that were ignored.) During Giuliani’s ill-fated presidential run, there were numerous groups intent on revealing Giuliani’s negligence-not-heroism on 9/11: not providing working radio equipment to first responders, thereby causing deaths that could have been avoided; health problems ignored, not treated, no warnings or breathmasks provided for responders, etc. As many thousands as died that day from the attacks, Giuliani might well be responsible for thousands more health problems and deaths precipitated by the toxic atmosphere at Ground Zero.

Someone wrote that the “incidental presence at the location of the worst attack on U.S. soil did not make Giuliani the foremost expert on terrorism.”

The most pathetic aspect of this film is that James Woods himself is a rabid Giuliani fan, worshipping the ground that the succubus glides across. The filmmakers step so far into hero-worship, the movie poster portrays Giuliani in that famous pensive Kennedy pose of crossed arms and head bowed! Even though Woods would win a Golden Satellite Award for RUDY, the character is simply Woods doing Woods in a “Hollywood” performance, and we never get lost in his portrayal.