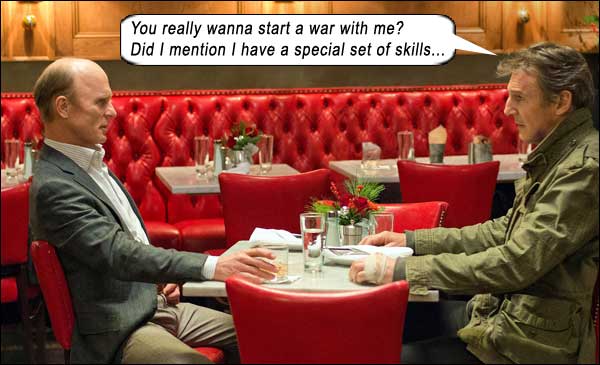 Jimmy Conlon (Neeson) is a former hitman for Brooklyn mob boss, Shawn Maguire (Ed Harris), his only true friend and confidant. Once known as The Gravedigger, Jimmy now spends his days in Shawn’s bar, drinking and being lonely.

Shawn’s erratic junkie son Danny (Boyd Holbrook) is trying to cut sweet drug deals to rise out from under his father’s shadow, while Jimmy’s straight arrow son Mike (Joel Kinnaman) has a Disney family, a job as a limo driver, and wants nothing to do with his father’s past or present.

One night, the two sons cross paths: Mike witnesses Danny executing drug dealers. So Danny comes after Mike to shut him up. Enter The Neesons to save his son Mike’s life, by killing Danny – the son of his only friend.

Though Shawn knew his son was an unbalanced junkie, his honor will not let him forgive Jimmy, his lifelong friend, or Jimmy’s son, Mike. The word is on the street – to the thugs and crooked cops alike – to bring back the heads of Jimmy and Mike. Now they’ve got to Run All Night to stay ahead of all those thugs and crooked cops who can’t shoot straight. Common is called in to do what he does best – be a gangsta; he’s the hitman’s hitman, a LEON-type sent to kill Jimmy and Mike. Now the only way Jimmy can get Shawn off his son’s back is to go after Shawn himself…

It’s a nice little hook to an otherwise stock movie, and rest assured the film is double-stacked with fightin’ and car chases and night explosions, but as aforementioned, the “love” keeps shining through…

Firstly, there is the love of Jimmy for his boy. Though Mike viciously pushes Jimmy away, as if Jimmy’s criminality will rub off on his innocent family, Jimmy unconditionally keeps proving his love – by coming back to save Mike, then disallowing Mike to fire any weapons at their pursuers, because, “If you kill them, it will make you just like me.” There is Mike’s love for his wife (Genesis Rodriguez) and family, and his desire to shield them from thug life.

Strangely enough, there is the love of Shawn for his unbalanced son, pursuing Jimmy against any sense simply to avenge that unbalanced son’s death. And there is the decades-tough gangsta-love between Shawn and Jimmy, evidenced in one beautiful tragic moment, with brilliant subtle acting. Jimmy ploughs through Shawn’s bodyguards and takes down Shawn. As Shawn lies dying in Jimmy’s arms, he puts his hand up to touch Jimmy’s face tenderly. In his final moment, he has only affection for his killer, once his friend. Tears not only for that friendship lost, but for Ed Harris and Liam Neeson who could convey that emotion wordlessly.

Neeson’s juggernaut special ops character in TAKEN has informed all his post-TAKEN roles, so we are inclined to miss the nuances in Jimmy Conlon. He’s not a Bryan Mills robotic killing machine; his life is sad regret, as he tries to atone for the sins of his past to regain the respect of his son. And Liam does sad regret so well! (It’s roles like these that make me recall Liam’s shattering loss of his wife Natasha Richardson in 2009, and what a shadow of sadness must hang over him.)

A lone honest cop (Vincent D’Onofrio) harangues Jimmy constantly about giving up a list of people he’s killed. This tale’s very last act of love is Jimmy clutching in his dead fingers – that handwritten list. It means that though his son and everyone else saw him as a wanton killer throughout his life, remembering his victims’ names meant each murder weighed on his soul. And though I generally despise the arc of the killer finding redemption, RUN ALL NIGHT is about a mercenary killer who was always earnest, not some psycho who finds goodness through a precocious annoying kid or a loving woman or a dog that understands English. Like all those other gritty twat-eating hardass badboy movies.