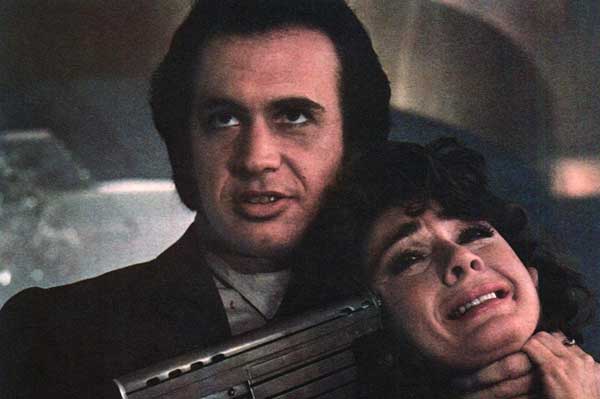 Looking back at the Future.

Back in 1984, when Tom Selleck was kinda a leading man and Gene Simmons was kinda an actor, they made a movie called RUNAWAY. Kinda.

It is The Future, and “robots” are aiding every facet of humanity, from drones with cameras in them (you don’t say!) to Artificial Intelligence nanny robots (that look like a boxy R2-D2). When a robot runs amok, you call in the Runaway Squad, headed by Jack Ramsey (Selleck). He knows how to flip a switch to turn them OFF apparently. His new partner is Thompson (striking blond cutie Cynthia Rhodes), who turns him ON.

They discover one of the runaways was actually programmed to kill a particular person. So – not a runaway – but murder. The man behind this new “chip” technology is Dr. Luther (Simmons, loaning himself out from KISS, and being derelict in supplying his partner Paul Stanley with decent songs for their Animalize album).

Catering to the synergy of movies about technology and A.I. (ELECTRIC DREAMS, 2010: ODYSSEY TWO, THE TERMINATOR), RUNAWAY does its best to predict and portray future tech, but its release date is so far in the past (1984), that it has dated worse than Aquanet.

Great thriller novelist and adequate director, Michael Crichton said he wanted it that way, citing the “primitive” tech of the machines being the catalyst that necessitates the Runaway Squad, hence driving the plot of the movie. Ramsey doesn’t trust the machines, and would much rather a human touch than cold steel. (“Don’t use the machine! Let a person do it!”) The mostly-outdated machines (drones, bomb robots, and RC toy cars) are mixed in with vastly-superior A.I. (police sketch artist robots, nanny robots, smart bullets), so the verisimilitude of the future society seems skewed, because we’re viewing all the tech – good, bad and outdated – through the lens of retrospect. 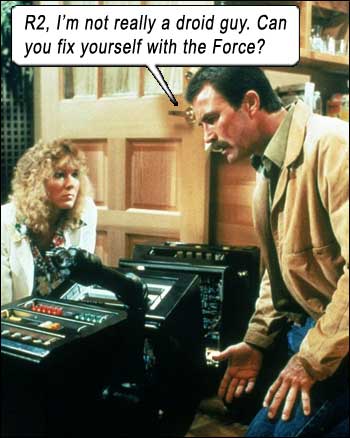 Luther’s girl is played by Slim Kirstie Alley, the police chief is G.W. Bailey (reprising his role as Lt. Harris from POLICE ACADEMY), and Stan Shaw is Marvin the token black cop.

All the cast takes it seriously enough, but Selleck (on down time between seasons of MAGNUM, where he plays a cop in that TV series) can’t seem to conjure enough gravitas to make us forget he’s a cop in that TV series. Simmons does a surprisingly sturdy job as the sinister villain, his inborn contempt for humanity fueling his character’s motivation to kill people with robot spiders. Reason? Uh, maybe they didn’t buy his last album?… If we doubt his ethos, we are reminded seriously by Slim Kirstie Alley: “Luther – he’s evil, I’m telling you!” Dialogue gold.

For once, there’s a sensually-tending-the-wound scene where the GUY is tending the GIRL instead of the other way round, and of course, the two leads become closer through this shared adversity. Just one trope among many in this cops and robbers chase movie transplanted to what Crichton envisions as “future times”: Ramsey’s a single dad (so can fall in love with his lady partner), has a fear of heights (that he conquers in the final act); he saves his female partner himself (even though there are more qualified personnel around), his son keeps pulling for him to marry his partner so he can have a mom again…

The funniest part is when Luther lies dead, eyes open, face expressionless, and Ramsey feels his neck for a pulse. Suddenly – that classic jump-scare where the villain comes back to life, as Gene-not-Luther hisses at Ramsey in that bat-demon expression – then falls back dead, expressionless again. Paul and Bruce and Mark and Eric must’ve laughed like loonies, as they watched the video and ate popcorn in the apartment that they all share like The Beatles.

RUNAWAY, for all its ambition, could not compete with the more authentic “future tech” in 2010: ODYSSEY TWO or THE TERMINATOR, both of which crushed it at the box office. We should have suspected something amiss when the opening sequence showed tiny tractor crop robots going offline and destroying corn stalks one at a time. It was almost exciting. The purely-eighties soundtrack (by Jerry Goldsmith – his first using only synths) painfully drops the movie smack in the mid-80s, never to break free and run away.