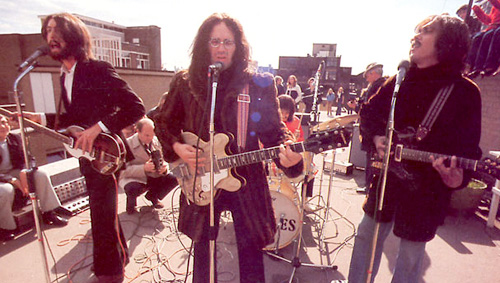 The Ballad of Eric and Innes.

Better than wishing for the Beatles to reform, better than any Beatles tribute band, and definitely better than Jesus, Eric Idle‘s THE RUTLES is a brilliant, hilarious, underappreciated pastiche of the rise and fall of The Beatles.

Written and co-directed by Idle (of Monty Python) and starring Idle as a roving reporter and as one of the band members, THE RUTLES (pr. “ruttles”) follows the fictional eponymous band from their humble beginnings in Rutland to world domination, due in large part to their trousers. From their appearance on the Ed Sullivan Show to conquering Che Stadium (named after the Cuban Guerilla leader, Che Stadium); from their dabbling in movies, spiritualism, and that hardcore substance known as tea, to their eventual dissolution (due to “women,” by Mick Jagger‘s account).

Along the way, we are treated to a visual and aural kaleidoscope of Beatles parody, from the iconic look of the band through their various periods, to the catchy-as-crabs songs, to the personal and professional situations that The Beatles pioneered. It’s an astounding piece of work! The visuals alone would have been mighty achievement enough, but those songs! Composer Neil Innes outdoes himself by conflating and coaxing well-known Beatles songs and motifs into wholly original pieces of music that sound exactly like The Beatles; it’s not just one or two songs – it’s a whole body of ingenious work! Various accounts note the number as anywhere between 15 and 30 full songs, all of which don’t just emulate Beatles style, we can pinpoint exactly which Beatles song(s) Innes’ songs are parodying. (Hold My Hand sounds like All My Loving, OUCH! is HELP!, Love Life is All You Need Is Love, Doubleback Alley is Penny Lane, and so on, yet none of these songs are merely replaced words over a copyrighted tune, or vice versa – they are a totally new composition. George Harrison and John Lennon even remarked jovially to Innes how close his fake band was to a real lawsuit.) And Innes himself happens to make the best Beatle in appearance and mannerism – an analog of John Lennon named Ron Nasty.

Films featuring performing musicians always grate on real musicians’ nerves when it comes to sound synch and/or miming the playing, but THE RUTLES gets it right, because everyone is doing their part (except for Eric – but he’s a musician/singer who does play right-handed guitar, so can fake a reasonable left-handed bass – but I’m sure it must have been an aching frustration for him). 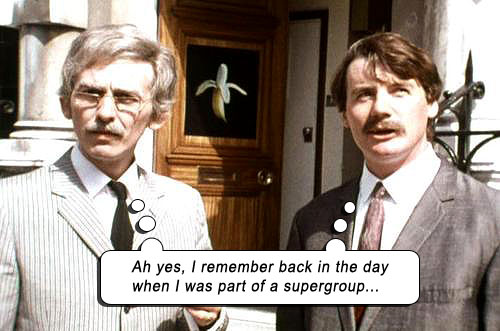 Cameos include talking head interviews with the aforementioned Mr. Jagger (a permanent enigmatic smirk on his face and a twinkle in his eye), Paul Simon (taking it so seriously, I think he thinks The Rutles are a real band); Ron Wood as a Hell’s Angel (a wink to Altamont?), George Harrison as an Interviewer (who also had a small hand in production), fellow Python Michael Palin as an overzealous lawyer, Gilda Radner as an interviewee, Dan Aykroyd as the Executive Who Turned Down The Rutles, Bill Murray as DJ Bill Murray the K (styled after real life DJ who made The Beatles his cause célèbre, Murray the K) and the absolute pinnacle of satire, John Belushi as feared promoter Ron Decline, “People always ask me, ‘Where’s the money?’ I don’t know where the money is – but if you want money, I’ll give you money…”

With so many SNL alumni, you can guess Lorne Michaels sat in one of the producer’s chairs. (Eric Idle guested on SNL in 1976, where his Rutles sketches with Innes caught Lorne’s attention, who suggested extending the idea to a feature-length mockumentary.)

Every moment in THE RUTLES is multi-layered parody: their moniker “The Pre-Fab Four”; Apple Corp’s banana logo; the interview outside Apple’s offices, with Palin as lawyer painting a rosy picture of Apple’s financial strength while people steal things in plain sight behind him (akin to bankrupt Apple’s real life decision to simply give away all its possessions); Chastity (akin to Yoko Ono) portrayed as Hitler’s daughter; Nasty (ersatz Lennon) and Chastity holding a peace rally in their bathtub not bed; scenes from the band’s origins in the Rat Kellar, to their films A HARD DAY’S RUT and OUCH!; to discovering the mind-altering effects of – tea!; to the album cover that gave rise to the rumor of Stig’s death, Shabby Road, where Stig did not wear pants (on Abbey Road, Paul did not wear shoes); to the failed experiment Tragical History Tour and the final album Let It Rot…

Eric Idle’s brainchild (or brainless child, as the case may be) inadvertently occupies a potent place in musical history. Notwithstanding all four Beatles’ differing reactions to it (Lennon–loved, George–involved, Ringo–liked happy bits, breakup too close to bone, Paul–no comment), it is a pioneering piece of Art itself that started a convention in musical biography. Created long before Christopher Guest’s THIS IS SPINAL TAP (1984), VH1’s BEHIND THE MUSIC series (1997), and almost two decades before producer Neil Aspinall completed the expansive Beatles Anthology itself (which Eric apparently viewed in its early incarnation), THE RUTLES hits all those beats that would become staples of any rock band’s biography in decades to come: the innocence, the talent, the success, the tribulations, the temptations, the downfall.