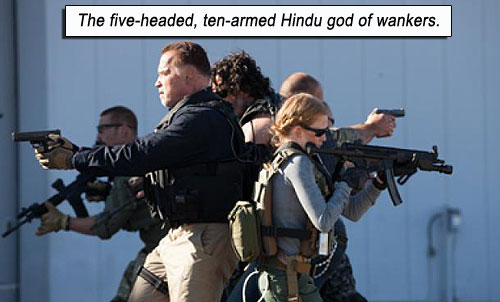 Schwarzenegger is Breacher, head of a rogue DEA unit (Drug Enforcement Administration) that steals $10mil from a drug cartel, which is immediately stolen from them by unknown thieves. Whoops! SABOTAGE! Then one by one, his team starts getting murdered mysteriously.

This would be a concern for us viewers – if it weren’t for Breacher’s team being the most unlikeable group of tits this side of Doucheland.

There’s Monster (Sam Worthington, WRATH OF THE TITANS, with his finicky beard), married to the butch female of the team, Lizzy (Mireille Enos, WORLD WAR Z, the best-looking person to have eyes pointing in two directions since Marty Feldman); there’s Grinder (nappy-headed ho Joe Manganiello, MAGIC MIKE), Sugar (Terrence Howard, THE BEST MAN HOLIDAY, the coolest cat of all these jackasses, reduced to playing a wigga), and Neck and Pyro and Tripod and Sleepy and Bashful and Dopey.

I realize that movies like SABOTAGE are to modern kids what movies like THE DIRTY DOZEN were to previous generations: showcasing hard guys doing hard stuff – and I’m sure the target demo is lapping it all up like kitties – but these modern hardcases just seem to be wanking a little too much in each others’ presences to be straight-up butch. It’s all pretend toughness, innit? I mean, they visit a regular strip club after every caper; exactly how juvenile are these man-boys to be either turned on or impressed by a strip club where the chicks don’t even get naked? And why are they wasting their dollars on these bitches when it is implied they are hard enough to score these syphilitic sirens on a regular basis? Later, Dopey is giving Bashful a tattoo on his back. Is that tough or gay? They drink hard, play video games and insult each other with language I haven’t heard since Catholic school. Wow, so tough and badass. But how badass can you possibly be Grinder, if you spend that much time braiding your hair to resemble a black schoolgirl? And Monster has the bottom half of his beard braided, to resemble an idiot. Imagine the quiet time he spends sitting in front of the mirror between barbell lifts or pipe-hitting and carefully twirling that skanky mess like dolly hair. Real toughguy.

Olivia Williams with an unflattering lesbo hairdo is the FBI agent investigating the team murders, and the great Harold Perrineau is her bottom bitch.

And who said it was okay for the DEA to be outfitted like the military? Breacher’s team look like they’ve just had an orgy with SEAL Team 6, rolling up in an armored Humvee, boasting kevlar armor, giant automatic weapons, murderous paraphernalia hanging off their utility belts that could wipe out a Third World nation and attitudes like the donkey dicks that they are. The word “POLICE” is stamped across their vests, but shouldn’t there be another word for people this far up the military’s anus? You know – like “THE MILITARY”? Their job description stopped being “police” as soon as they started dressing like they were going after supervillains. This is what America has come to, allowing the drift of militarization to encompass city cops – who all act like Judge Jury and Exe-fucken-cutioner as they pump round after round into anyone who steps in front of their penis– I mean, gun, without so much as an “Innocent Until Proven Guilty.”

How many more reasons do we need to hate these macho sons of whores and their badboy lifestyle choice?

There is a subplot of Breacher’s wife and child being raped and tortured by the cartel. But how sorry can we feel for Breacher when he is constantly pulling up his wife’s torture video to lull him to sleep at night? Can anyone say massive PTSD and disconnection with reality?

SABOTAGE is expressly grisly – to distract from the stupidity of the story. When Breacher’s first team member is murdered by a train hitting his RV with him in it, we see many gruesome bits of body laying about the murder scene later. And the second murder involves a guy meat-hooked to the ceiling and disemboweled! Has screenwriter Skip Woods been watching too much SE7EN or SAW? We realize how much co-writer and director David Ayer has lost his grip on reality when the murderer and motive is revealed. And then in retrospect realizing that each murder had to be done fast and efficiently, so how in Brad Pitt’s name did the writers come up with that outlandish disemboweling scene? Nice budget. Let’s use it.

We also peg the toilet scene as gratuitous: Breacher’s team must uproot a toilet to shove their stolen money down the sewer. The toilet is smattered with what can only be described as the post-result of mixing the unsanitary secret recipe of KFC and the shoe-flavored anti-nutritional cuisine of McDonalds. But drug lords own this toilet. They live like sultans. Which one of them would stand for a toilet so filthy? Just more Hollywood shock value, and I’m not buying it.

Schwarzenegger gads about doing a reasonable acting job, and he even “gets the girl” in a normal manner, but other than one scene at the gym and another funny line where he angrily accuses a fat FBI agent of having 48% bodyfat, he is never called upon these days to focus on his forte and strongarm some freaky-deaky.

You will find that SABOTAGE is a completely misleading title for this film. And there is a strange coda tacked on to fulfill Gutless MPAA protocol. Breacher is allowed revenge for his wife, but then denied getting away with his life. What did the movie title have to do with any of this? Sounds tough, but really just pointless. Much like those badass tools…