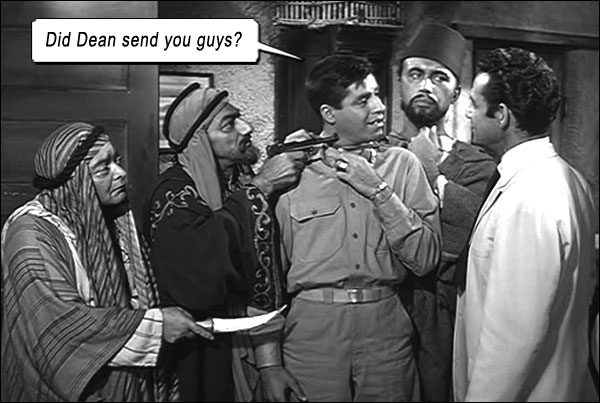 THE SAD SACK is Private Meredith Bixby (Jerry Lewis), an inept dogsbody who is, for his mechanical skill, given the chance to succeed in the military by a female major, who orders another Private to surreptitiously shepherd Bixby through adversities, such as everyday life in the military. The title might imply someone moping around like a killjoy – which Bixby does not do (in fact, he is inexplicably optimistic, with an amazing photographic memory) – but it is actually military slang for “sad sack of shit,” meaning a total fuckup. Of course, this movie’s family demographic prohibits it from getting anywhere near that phrasing.

It’s the stupidest plot in a Jerry Lewis film since SAILOR BEWARE. That movie was also military-themed. Proving that Hollywood writers ran out of ideas for military comedies a long time ago.

Based on the unnamed 1942 cartoon character by Sgt. George Baker, I guess Jerry is probably one of the few people who can carry off being a cartoon klutz, but the story is so stupid and the characterizations so irritating that no amount of Jerry mugging can save this sad sack of shit.

Private Bixby is shielded from harm by Major Shelton (Phyllis Kirk, HOUSE OF WAX). She’s a soldier, a psychiatrist, and a dame. And that seems to throw every man who comes into contact with her into brain farts. When she summons Corporal Dolan (David Wayne) to tell him about Bixby’s potential and him needing a protector, she has to qualify her position and her orders, because – hot female. Dolan: “You’re quite a departure from the usual Major!” Is that how the army allows you to speak to superior officers? Not unless they have tits, I guess. Constant sexism dogs Shelton’s every encounter with males: “Aren’t you being overly sentimental?” Shelton: “Sentimental?” Male: “Well, you ARE a woman.” Somebody shoot the writer.

And then – in a total reversal of what the film is saying by placing a woman in the empowered Major’s role – she falls for Dolan like a schoolgirl crush. Why? Was it his runneled 43-year-old face that was meant to look 20? Was it how doughy his backside looked in those Army issue pants? And he didn’t even sing her a song to wet her down. Speaking of which, Dolan’s role was written for Dean Martin. (Even the name Dolan was reminiscent of “Dogface Dolan” from Martin-and-Lewis’s JUMPING JACKS.) In retrospect, we can clearly see the demarcation line between Martin and Lewis films and Jerry’s solo career, but back in that year (with only this second solo Jerry movie in launch), studio movies and their contracted personalities were an ongoing business venture, and the producers that made major bank off Martin-Lewis were regarding the breakup as a simple separation, and were still commissioning movies fully with the intent to place Martin and Lewis side by side again; maybe not in the next one, or in the next two pictures – let the boys get their ya-yas out! – but there would come a time when the teammates would see the folly of their separate ways and eventually come back together like atoms circling a nucleus. It was Science. And it was Hal Wallis, the producer whom Martin and Lewis OWED three more movies under contract, and Hal would not be denied his pound of flesh… 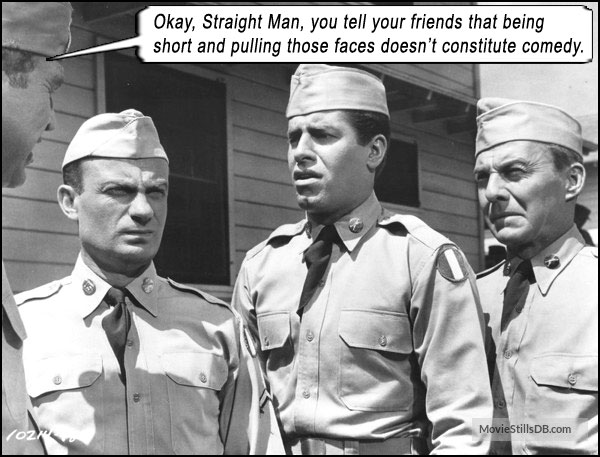 Jerry didn’t want to do another military movie, feeling he had done all he could with the format in his 3 Martin and Lewis military pictures (AT WAR WITH THE ARMY, SAILOR BEWARE, JUMPING JACKS); he was also exhausted from a hectic schedule of live shows, recordings and producing his last film himself (life without Dean was proving just as lucrative and rewarding!) but Wallis was waving contracts in his face and creeping like a lawyer; it allowed him to force director George Marshall onto the production, whom Jerry hated working with since the days of MY FRIEND IRMA.

For whatever reason (maybe wartime authenticity?), this is Jerry’s second black and white solo film in a row.

Larry Dolan was paired with another numbnuts named Stan (overacting Joe Mantell), making their character names Stanley and Larry… a tad close to Stanley Laurel; and their antics almost resemble Laurel-and-Hardy’s, if it weren’t for the fact that Dolan had to retain a semblance of leading-man cool (of which he had none anyway). Also, it just doesn’t look right that both these guys are considerably shorter than Jerry.

After what seems like interminable oft-seen Jerry gags (as he feared, he was repeating himself), Bixby is assigned to Morocco, and Dolan is sent as shepherd. In an exotic bar there, Bixby falls for a Parisian femme fatale (Liliane Montevecchi, an exotic brunette who looked nothing like the American pointy-bra dames that populated Jerry’s films), and gets mixed up in a terrorist plot, while trying to join the French Foreign Legion. Peter Lorre and Michael Ansara (renowned That Guy) are the villains who use Bixby’s photographic memory to force him to build one of the new American cannons.

The French Foreign Legion actually appear in the final frames to pin a medal on Bixby for foiling the plot (inadvertently, of course). Ah, so this is where the French love affair with Jerry started!