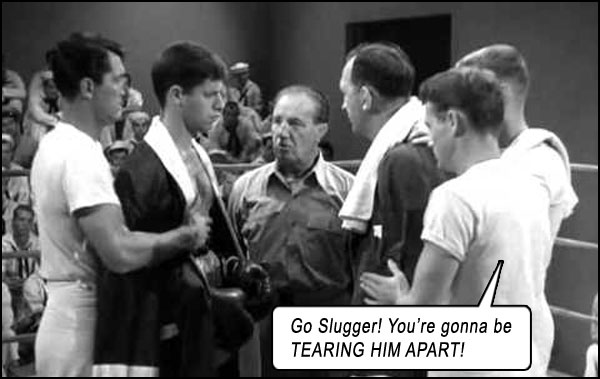 Probably the stoopidest Dean Martin and Jerry Lewis musical-comedy, SAILOR BEWARE is about two pals enlisting in the Navy and getting involved in a kissing contest that somehow gives one of them the reputation of a Lothario – even though he is allergic to kissing women. Then it ends before it gets mistaken for a movie.

After an overlong and mildly funny enlistment process, Al (Martin) and Melvin (Lewis) become sailors under Commander Lardowski (bulldog-faced Robert Strauss, in the first of his 3 Martin and Lewis films). Like their previous military film (AT WAR WITH THE ARMY), Martin and Lewis are once again formerly nightclub entertainers. We discover this once again through exposition as clunky as a Jerry Lewis pratfall: Melvin walks in on Al giving blood and asks, “You still here?” Al: “Where’d you expect me to be? Back at my old job singin’ in a nightclub?” [smh… Jesus!]

Adapted from a stage play, James Allardice and Martin Rackin screenwrite for director Hal Walker (his 4th and final Martin and Lewis film; he would go on to direct Hope and Crosby’s ROAD TO BALI later this year), and we imagine that Jerry (who wrote all the Martin and Lewis shtick) simply sacrificed story for shtick, to insert his and Dean’s trademark wackiness wherever he felt like it. Even for an absurdist musical-comedy, the plot doesn’t make sense even within its own universe. 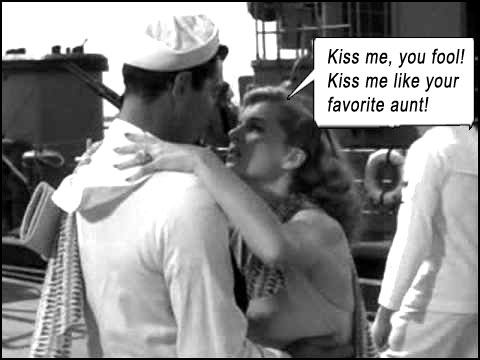 Al is a layabout who was deferred 11 times with a trick knee, confessing to the boyz outside the enrollment office that he just likes to kiss a new girl goodbye every time (cameo by Betty Hutton – Annie Oakley in ANNIE GET YOUR GUN, 1950), while Melvin can’t kiss girls because of his allergic reaction to their face makeup; his doctor has prescribed ocean travel and he begs the attending officer to get him in. A seaman sneers at Al “they’ve lowered the standards” so Al gets accepted; while Melvin is skated through the enlistment process by sneering seamen who seem to be drooling over raping him in the showers or something… The stupid thing about both their enlistments is that it seems like the Navy is accepting them out of malice; allowing them into their ranks because it intends to make life hard for them. Doesn’t this make the Navy look like a petulant bunch of sissies? Besides that, isn’t it the highest HONOR to be in the American military? Why then, have these two outcasts been pushed through unwillingly and unethically? Or why treat it so slimily? No one is thinking this through…

Al’s and Melvin’s first night onboard a submarine, the filmmakers don’t scrimp on the claustrophobia, as we are shown the triple-tier bunk-beds, the men in the bottom two bunks relying on the top bunk man to get up and flip his bunk upwards for them to be able to exit their bunks; otherwise, trapped there all night. Played off as a gag – with Melvin constantly finding reasons to exit his bottom bunk, thereby forcing the two guys above him to keep flipping their bunks up for him to exit – the true horror, and the wartime mentality that treated men as slabs of meat, is glazed over.

But then – the real horror: Melvin asks Al to sing him to sleep with a song. Any excuse for an insufferable Dean Martin song! Luckily, a sergeant puts a halt to the festivities and calls Al to his office… where he proceeds to broadcast Al throughout the submarine, singing a song “for the morale of the men”… [smh… oh, Jeebus!]

Dean’s velvet croon: A sailor sings a line to Dean, and Dean re-sings the line, demonstrating how it should be sung – and in that one line of lyric, we realize what a great singer Dean Martin truly was. It reminds me of that scene in WAYNE’S WORLD 2 when Wayne pulls out Charlton Heston to redo a novice actor’s line-read – and we don’t even realize what we are missing until we see the professional do it! Same thing here: this sailor does a reasonable rendition of the line – but when Dean chimes in, he puts a lilt in his voice that transports us to his velvet. It’s incredible to hear; it is Martin’s “style,” his swagger and sexuality; it swings, it is effortless (although many male singers would find Dean’s baritone range effortless – ah, but it was the unique way he stabbed at those notes via inflections and pseudo-yodels and smooth curves that stamped them Dino), and that one line prompted me to examine how Dean delivered all his songs, and spurred an appreciation of his art that I never had in my youth, back then only seeing his boring crooning as the leverage to get into women’s panties.

We start to get an idea of the work that Dean must have put into his vocal stylings. Maybe it came naturally – as Jerry and many people attest, including Dean himself – whatever the case, it was truly remarkable, which is why he left an indelible mark on the music industry and movies. And women’s panties.

The captain tells Al he is booked on a TV show called “Tempting Kiss.” How? Why? Who cares?! So the ship docks and all the sailors arrive at the studio, the MC calling Al to the stage to do a song. Yet there is no band or backing tracks to accompany Al. Did the MC expect Al to bring his own portable orchestra? A boombox? A pianist? An iPad? Where is the contract for this appearance? Were these conditions outlined in the rider? Is Al getting paid? Is there any offer of recompense to the Naval Forces at all? Is it illegal if the Navy is paid? What’s in it for Al? Exposure to agents to get work after his military service?…

While Al stands there literally saying, “I don’t know what to do,” Melvin brings up 20 sailors who happen to be a perfectly rehearsed choir and one sailor who plays the piano – no one states any song name or key – they all just start playing and singing the same song, with perfect backing vocals and harmonies. We know that whenever Dean Martin starts singing in a Martin-Lewis movie, an invisible orchestra always starts up anyway, but here, within the movie’s own world, the TV studio has just left Al hanging. How was he meant to salvage this appearance if his choir and pianist didn’t show up?

Then, through a misunderstanding, Melvin is chosen as Mr. Temptation and all the girls in the studio mob him like The Beatles to kiss him. Because – dames.

Melvin had brought an innocent date to the studio, an enlisted woman he discovered who did not wear makeup, Hilda (Marion Marshall, in her 3rd and final Martin-Lewis film; always hotter than the producers would allow her to appear, to keep her congruent with Jerry’s infantile characters), who gets jealous and storms out, while Melvin is being stampeded and kiss-raped. Is she that juvenile, seeing him obviously denouncing the attention and physical contact, which, he explained earlier, is causing his uvula to swell up so that he can’t breathe? Okay fine – but then, at movie’s end, when she sees the sexy French chick kissing Melvin – somehow it only drives Hilda back into Melvin’s embrace… Again, movie, make sense within your own universe! 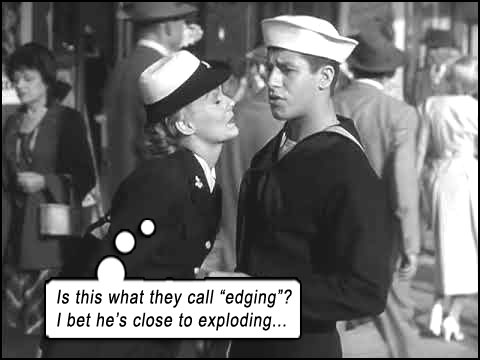 So with Melvin a kissable commodity, the sailors place bets on whether he can get a kiss from the sexy female star of the day – the Romulan from IRMA GOES WEST, actress Corrine Calvet, playing her French self in a heinous soft-focus jelly. Al gets too close to that soft-focus and is swallowed up in it before he can shoot off an unnecessary song.

Anyway, that’s the plot. Trying to land a closed-mouth kiss from a dame. Dogface Lardowski thinks he can make time with Corrine, and bets against Al, who has bet all of Melvin’s money that Melvin can make her (because, of course, it would be crass to bet his own money, for he might lose it!).

Saving the best Martin-Lewis “bit” for last – the boxing match, where Al interviews Melvin The Experienced Boxer to plant a scare in their opponent. And Melvin puts on a voice like – Sylvester Stallone! 24 years before ROCKY! We forget that the loose-lipped, punch-drunk boxer was a trope long before Stallone brought it widespread fame. And the other boxer’s ringman is – so young and seemingly talentless with only two lines – James Dean!

The boxing match itself reminds us of Jerry’s Chaplin influences; Jerry’s bout lacking the impeccable timing of Chaplin’s bit in CITY LIGHTS, but as remarkable for its one-man ingenuity.

Final scene finds our heroes kissing Romulan and Hilda down at the docks before setting sail. Betty Hutton is passing the docks and sees Al kissing Romulan. Insane with jealousy, she chases Al. Movie ends with all three girls chasing after Al and Melvin—But wait! What in hell is Betty doing down at the docks?! Unless she’s seeing another sailor off, what possible reason could she have for sauntering this close to the big ships? What does she plan on doing to Al if she catches him? Why are the other girls chasing them? They’ve already kissed them goodbye – are they mad at their beaus for having previous girlfriends? What do they plan on doing to Al and Melvin if they catch them?… [smh… Heebee Jeebus!…]