DIE HARD With A Vagina.

A bunch of guys chase after Angelina Jolie. So what’s new? 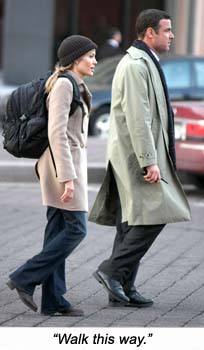 You lost me at Victoria’s Secret.

And after the North Koreans treat her with such respectful torture in the first scene, the blonde is released to the care of CIA officer Ted Winter (Liev Schreiber). On the outside, her Russian husband (August Diehl) awaits. He must be pretty happy that no one poked their genitals into his busty wife with the born-to-blow lips. ‘Cause you would think in a detainment camp where they renege on the Geneva Conventions on torture, rape would kinda be second nature. I guess North Korean soldiers just don’t have the high sperm count needed to be rapists of prisoners; not like American soldiers.

Written by Kurt Wimmer, directed by Aussie Phillip Noyce, SALT follows the blond prisoner, CIA intelligence officer Evelyn Salt (Jolie), after her rescue from North Korea, back into boring married life, until an accusation that she is a Russian double agent sets her on the lam. Supposedly a mole within the CIA, with a mission to assassinate the Russian president, Salt goes rogue to prove her innocence – or prove her accusers right.

Like its opening, SALT is one non-believable scene after another. Most of them can be passed off as action movie idiom, but then there are scenes like the capture of elusive, super-assassin Salt after merry chases and untold judo chops to faceless CIA guys who are either dead or going to be hospitalized for the next six months with broken limbs, crushed skulls and multiple contusions – and they let one weak FBI guy escort her away by holding her arm casually.

Act I is a one-trick pony. All Salt, no seasoning. CIA guys Winter (Schreiber) and Peabody (Chiwetel Ejiofor) chase Salt. And follow trucks that she jumps onto. And drive fast. And shout. And run. And shoot. And other white noise. The mildly-clichéd Manchurian Candidate backstory starts unfolding, which Liev Schreiber calls foul on (he was, after all, THE MANCHURIAN CANDIDATE in 2004).

Act II: Salt changes her hair color from striking blond to extra-silky brunette, so that she can walk amongst crowds incognito while she plots to do Russian stuff; and it works, cos not one human male with testosterone notices the leggy, leather-clad, raven-haired, busty trollop walking amongst them. Not one askew glance, not one crook look. Those classes at the Clark Kent School of Disguise really paid off.

We end up deep in the bowels of the White House war room, with a vanilla president (Hunt Block) looking way out of his depth to be ordering nuclear counter-strikes on Russia. And the plot thickens as Salt insidiously wends her way through inept Secret Service guys and security systems to assassinate Mr. Vanilla (like that will ever happen in an American movie!).

You’d think with all the crowing about the real life training they do for the combat scenes that director Noyce wouldn’t cut those scenes in such hard closeup, so we could see a little expertise and not just get a headache from the camera moves.

When they capture Salt five feet away from the president, after breaching the tightest security in the world (the White House), one would think they’d use a soldier built like a WWF brickhouse to escort Salt into custody, but no – still that same weak FBI guy.

No wonder everything gets pear-shaped again, which leads to the setup for a sequel. Oh no! More chase movie, more stunts, more weak FBI guys. A coupla suggestions: look carefully for the hot chick clad like a Goth amongst a rabble of middle America rednecks, and try using Hannibal Lecter restraints next time, tools!