Jingo All The Way. 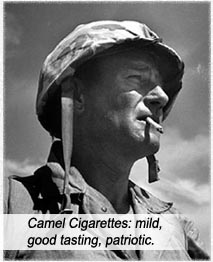 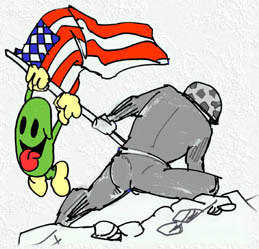 John Wayne drawls his way through yet another war movie where thirty-something teenagers with clean shirts and Christian mouths storm battlegrounds where they die operatically from bullets that don’t make exit wounds; powerful enough in its day to be regarded a “classic,” SANDS OF IWO JIMA elevated Wayne from studio standard to worldwide megastar.

This Allan Dwan-directed film, exploiting the hot topic of the most reproduced photo of World War II (Joe Rosenthal’s shot of the flag-raising on Iwo Jima), exhibits that same snide jingoism every American or British production fell victim to during that war-mongering epoch. In 2006, the public incessantly whines that 9-11 “entertainment media” is produced too close on the heels of the actual event, yet WWII movies were being churned out not only on the coattails of the war, but during the war itself. With no passage of time at all to lend any perspective, these movies could crush a foreigner’s spine with their patriotic intensity.

Clean-cut American whitebread boys (with the odd Polack and Mick thrown in for begrudging realism), meeting soft-focus American blondes (from – er, New Zealand) and falling in love after one night of Puritan necking, to give them motivation to keep America free of races which don’t look like Hitler Youth.

John Wayne is Sergeant Stryker, the tough-talking, hard-drinking, platoon leader who molds his thirty-something teenage misfits into a fighting unit proud and brave enough to storm a stock footage beach in the Pacific – even if it takes dirty dancing with one of them to do it; John Agar is the nancy-boy who melodramatically finds love and can’t shutup about it; big Forrest Tucker, long before he makes an ass of himself on tv’s F-TROOP, makes an ass of himself here as a hard-hitting ex-boxer and nemesis to Stryker; Richard Jaeckel, as always looking more Nazi Youth than Apple Pie, provides comic relief with an Aryan-looking brother of his, as does the token Polack guy with the annoying Brooklyn accent.

Focusing on Stryker’s recruits long before Iwo Jima, the film’s feature battle is actually on Tarawa, with Iwo Jima’s skirmish seemingly an afterthought in the last few minutes of film. The flag-raising – that absurd little habit of murdering conquerors which inspired this movie’s production – is given short shrift and then embarrassingly staged, with the Rosenthal Position dwelt upon just long enough to make anyone with an ounce of real patriotism feel dirty.

Not dwelt on enough are the cameos of the three surviving flag-raisers (Rene Gagnon, John “Doc” Bradley and Ira Hayes), who were elevated to hero status by a misguided nation and slopped onto this movie’s celluloid for ticket-selling effect, yet who are bequeathed less than one-eyeblink’s worth of screen time in the movie’s final five minutes. So much for heroism.

Stock footage from Tarawa and Iwo Jima is jarringly intercut with Dwan’s footage, and those studio sets that used to suffice for outdoor locations (with more than two shadows giving away the gag every time) just don’t cut it in today’s greenscreened and special-effected universe. Adding to the pain, some deliciously execrable performances by many of the one-liner supporting cast. And as for war authenticity or factuality, you would have been hard pressed to find any objective or truthful account of the war during 1949 on American soil. SANDS OF IWO JIMA – replete with conceptual, military and factual flaws – was as “true” as you were going to get in those days when bigotry was not only politically correct, but encouraged as a national pastime.