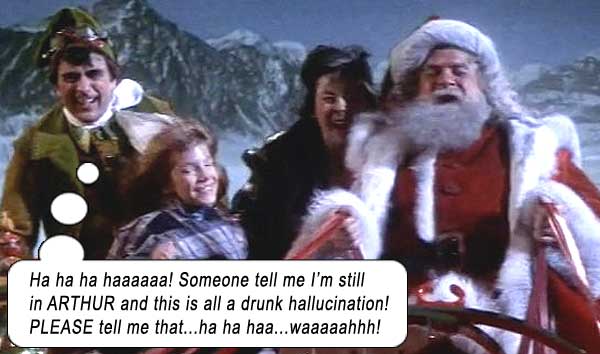 I feel most embarrassed for Dudley Moore. What a talent! Wasted in SANTA CLAUS: THE MOVIE; not just wasted, but defiled, besmirched, and shat upon!

SANTA CLAUS: THE MOVIE is a nauseating mess of brainless plotlines and platitudes. The trailers allude to the villain: “Now someone wants to take the magic out of Christmas!” Don’t look now, movie, but you’re doing a great job of that yourself…

Opening in some snowy clime, we find an old man named Claus and his wife Anya (David Huddleston and Judy Cornwell) delivering toys to kids during a snowstorm. When they try to sleigh it across town with their two Germanic reindeer (Donner und Blitzen), they become snowbound and – from all appearances – they die frozen in their sleigh, while their reindeer collapse in the snow! Soon a Star of Bethlehem shines down upon them, reviving them, and a troupe of elves appear and say they’ve been “waiting a long time” for the Claus’s arrival…

Wait – are they still dead? And is this whole tale nothing but the last firing synapses in an old man’s hallucinating brain? “Waiting a long time”? Supposedly, Claus fulfills some mad prophecy foretold by Burgess Meredith’s elder elf. Okaaay… but when they show Claus the elf workshop at the North Pole, it has obviously been fully outfitted and operational for centuries. What were you elves doing sitting on all this undeliverable product? Contrary to the junkets, this is not some “magical elf kingdom” – it’s a gateway to horrifying madness!

The elves name him “Santa” Claus and the madness only escalates…

Dudley Moore is elf Patch, an overzealous inventor who tries to modernize the workshop and fails. A plot point that goes nowhere. He’s listed as the star, even though he is nothing but a B-character with no defining arc or heroic moments. This comedic titan (BEYOND THE FRINGE, DEREK AND CLIVE, NOT ONLY BUT ALSO), noted jazz pianist, a versatile actor who had already proven himself a lead in movies like 10, ARTHUR, UNFAITHFULLY YOURS, is subjected to this dreck! Was his agent high? Moore is completely stultified in this children’s throwaway sludge-bucket. No lashing out with his furious energy and razor-sharp ad-libbing; no startling display of musicianship, not even a titter to be found in the feculent script where the puns run like diarrhea: “He just needs to learn some elf-control.” “Isn’t it elf-explanatory?” “Heaven helps those who help their elf.” It is heartbreaking to note that Moore would not command another memorable role after this pigshit, for the remainder of his life.

Claus and his wife are told they are going to live forever, delivering toys to kids. What the fuck?! Firstly, how is this physically possible, just by stating it? Secondly: I’m stuck in this day-glo nightmare of smiley-faced elves with no souls hammering rocking horses and painting wooden trains FOREVER?! 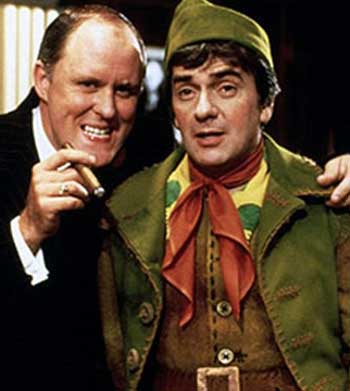 “Stick with me, boy, and we’ll rule the Gay Mardi Gras!”

John Lithgow (whose overacting still can’t disguise what a good actor he is) is millionaire toy manufacturer B.Z. who creates toys with nails and glass shards inside them. (Do even KIDS find this plausible?) When Patch is kicked out of the workshop for his malfunctioning conveyor belt toys, he offers his services to B.Z. to create lovable toys. Unfortunately the spastic elf-juice that he ladles into every toy has made them combustible. But B.Z. doesn’t care. Against the advice of his lawyer, he wants to sell them anyway and corner the market on Santa Claus, declaring “Christmas II” and trying to usurp the old man’s crown. By now, we are wondering which seven-year-old wrote this script, and how that seven-year-old must be old enough now to bitchslap without fear of child abuse.

Santa shows some kind of blinkered favoritism toward a street urchin; urchin meets cute with niece of B.Z.; B.Z. ingests some elf-juice and floats into space, where apparently, you can breathe just fine; Santa rescues Patch in an insensate flying sleigh chase that has us asking: If Santa can teleport, and take people with him as he does so (as he does many times, as does Patch also), why is he bothering screaming at his Nazi reindeer to catch Patch’s flying car? Why not teleport over there? When Patch discovers his flying car is about to explode, why not teleport outa there? No, instead we are subjected to yet another of the film’s innumerable, unspeakable stupidities, as Santa flies under the flying car, does a loop-the-loop over it and then comes down under the car again, where he catches the falling Patch. Uh, why not stay under the car in the first place, instead of that useless loop procedure?

SANTA CLAUSE: THE MOVIE tries hard to be an origin tale, as it starts in the 18th century (when simple minds worshipped the Madonna) and lands in the mid-80s (when the charts worshipped Simple Minds and Madonna). But every detail is hair-pullingly irritating and contradictory, with the ubiquitous excuse that the movie is for kids: urchin has a fever, until the next scene where it’s not needed any more; evil businessman wants to make millions, then is cajoled into giving away presents free because “that’s how they do it at the North Pole” – but he’s still sneering and treating it like he’s cheating someone!; two reindeer have the flu, and Santa can only use six for his mad dash to save Patch, but it’s a pointless fact as it does not drive the plot or make any difference to the outcome or the characters’ arcs. In fact, realizing that six employees can do the work of eight, without any extra pay, is what corporate greed is built on. Is this a commentary on Santa being more like B.Z. than he realizes? No, just idiots at the jingle-bell helm of the sleigh.

Written by David Newman (writer of the SUPERMAN movies) and Leslie Newman, SANTA CLAUS is directed by the same man who surprisingly directed JAWS 2, Jeannot Szwarc (but unsurprisingly also directed SUPERGIRL). This is one of the last feature films he would direct, before moving to TV where he belongs. Also connected with the man of steel, this film’s producers, Alexander and Ilya Salkind, whom we now realize, fluked the quality of the first SUPERMAN feature film starring Christopher Reeve (1978), the sequels produced by them proving their low bar for quality, as they singlehandedly brought down their own franchise with under-funding and lackluster directors.

Now singlehandedly bringing down a grand comedian, an empathetic saint and a pagan celebration of winter solstice.