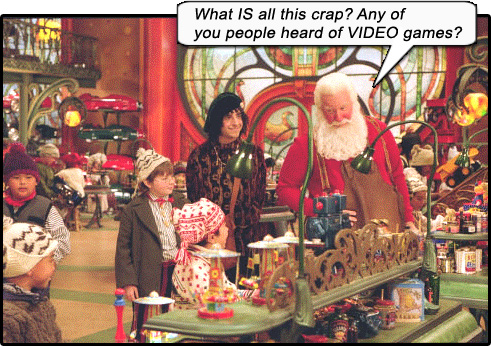 Due to THE SANTA CLAUSE 2, Santa Claus must find a wife or he will magically stop being Santa Claus, presumably leaving one billion spoiled brats on Earth wailing in frenzy for their free toys.

It’s eight years later – in real time and movie time – since THE SANTA CLAUSE (1994), and the original cast return to make ass-faces of themselves once more in this stupider sequel: Tim Allen as Scott Calvin aka Santa Claus; Wendy Crewson as his ex-wife (eschewing that abominable hairstyle from the last movie and now looking pretty damn MILF-y), still inexplicably married to psychiatrist Neil (Judge Reinhold, out-acted by any inanimate objects he stands next to); David Krumholtz is head elf Bernard, and Eric Lloyd remains Calvin’s son Charlie, no more a cute kiddie but an angst-y teen trying to impress a chick by graffitiing his school. He is busted by the new cast member – a blond, blue-eyed hourglass named Carol – “carol” get it? – (Elizabeth Mitchell), who is supposedly the hardnosed school principal, but the only people who don’t immediately figure she’s Santa’s romantic interest are the under-seven-year-olds. Ironic, since Santa’s sweatshop is still populated by sprightly elves and hot dwarfen maidens who are hundreds of years old but look seven.

In THE SANTA CLAUSE 2, as in its predecessor, we discover another duplicitous small print clause  – called the “Missus Clause” – which demands Santa procure a mate or he will lose his magic, his beard, his weight and status – in essence, un-become Santa Clause, and… what then? No more Santa forever? Hooray, I say! But what about the stranglehold on the Santa Brand that the Keepers Of The Klaus Bloodline were trying to retain with that small print on the original clause? This Missus Clause has the potential to pointlessly end that bloodline with its illogical penalty. If we get into the heads of Santa’s evil overlords, we can comprehend why they would force Santa to “marriage” – to legally spawn new Klaus blood for their unholy altar. But if for any reason he does not marry or mate, why make the penalty the dissolution of Santa Claus altogether? We can understand why a penalty would seem necessary to the provincial Keepers who penned these edicts (it is their nature to grasp and threaten), yet couldn’t it be something other than “de-Santafication”? How does ending Santa benefit anyone?

Okay, let’s just go with it, as “delightful, endearing family fun.” Scott Calvin has sold his soul so wholeheartedly to the Santa brand that now he doesn’t want to lose this dream job where he can feel up legal-age women with the bodies of seven-year-olds. But now he might be back at Square One again, forced to reconstitute his life as a rich toy executive, since his irresponsible elf (Spencer Breslin) only told him about the Missus Clause at the last moment; he only has 28 days to find a wife. And we presume he is looking for one with a congenital mental defect and a throwaway career and life, or how else would she willingly cleave to this guy she’s just met?

So Calvin creates an impostor plastic Santa to fool the sweatshop elves into thinking he is still at the North Pole – a ridiculous, shark-jumping, pointless subplot – while he travels back to Earth, meaning White America, to sniff out a spouse. And where everyone has inexplicably reverted back to denying Santa’s existence … “Reverted back”? But how can I claim they all KNEW Santa and now proactively deny his existence? Well, remember in THE SANTA CLAUSE, when Santa made a slow flyover a suburban neighborhood, dropping presents from his sleigh, with innumerable witnesses including adults, children, police and at least one psychiatrist? How then, in this sequel, can anyone claim a disbelief in Santa Claus? My head’s about to explode again… Did not one person report that singular event to authorities, the news, their workmates, just plain boastful gossip at a drunken party? You’d think that with all the contention over whether Santa “exists,” that evidence like that would spread around the world with the speed of a flying sleigh. (It would at least explain all those mysterious gifts under the tree that neither you nor your wife bought, and that you’ve never questioned until now because you’re obviously an idiot, like everyone in any Santa movie.) The only bigger news would be the Second Coming of Jesus H. Christ.

But no. In THE SANTA CLAUSE 2, here we are, back at Square Dumb again.

Also, Calvin uses MAGIC to woo Carol. When we real men EARN our money and give stuff to women, their gold-digging minds “fall in love” with us (that’s the natural way of things), but does it count if you “magically” give stuff to women and they feel the same way? Scott conjures for Carol a sleigh ride, hot cocoa, a very localized snowfall, some dolly shit she wanted as a girl, a kiss under mistletoe, and – most importantly – someone to listen to her boring yapping. And she “falls in love” with him. (You don’t get out much, do you, Carol?) What does the small print say about the means towards acquiring a wife? Is the marriage valid if arrived at via magic? After one date, Calvin tells Carol, “I love you.” And she falls for it. So they’re both virgins?

Meanwhile, at the North Pole, Toy Santa (played by Tim Allen in a plastic mask) turns dictator, puts ALL the children on Earth on the Naughty List and orders giant toy soldiers to takeover the workshop… uh, that’s right, he executes a junta overthrow of a place he is already in charge of. But it turns out these toy soldiers are more ineffectual than even STAR WARS Stormtroopers, as they are eventually taken down by little girls throwing toys at them, being sprayed with silly string and being kicked in the shins. Thanks to the five writers for that ingenious plot that went absolutely nowhere for no reason. Michael Lembeck is director. I just wanted you to know who to blame.

The number of times we hear the phrase “true spirit of Christmas” you’d think that someone might actually know the true spirit of Christmas was a pagan agricultural festival called Solstice, and mistakenly conflated with trees, gift-giving, a fat saint with a penchant for chimneys, and the birth of a fucking savior!

His little niece asks him, “Uncle Scott, are you Santa Clause?” He denies it. Again, I don’t get it! Why the secret identity? Why plant this indecisiveness in kids’ heads, so that they grow up to be confused adults that will make contradictory Santa movies?

By the time he is married to Carol, Calvin has returned to normal-weight Tim Allen, his beard having disappeared. As soon as he says, “I do” he balloons out to Santa proportions immediately. By magic. As in SHALLOW HAL (2001), a protagonist was attracted to an inshape person – who immediately balloons into a fatty boomsticks. And the filmmakers are asking us to believe the protagonist is still attracted to that person as a fatty. Over the years, we all tend to still be attracted to people whom we knew when we were all skinny together. But this is not the case here! What would YOU do if your 100-pound girlfriend or 190-pound boyfriend suddenly ballooned out to a contestant on the Jerry Springer Show? Is Carol still attracted to this fat sweaty milk-and-cookie addict? Disney says yes. It must be true.

In the last movie, they told Calvin: “Seeing isn’t believing – believing is seeing.”

Oh, I get it now: Ignorance isn’t bliss – bliss is ignorance.