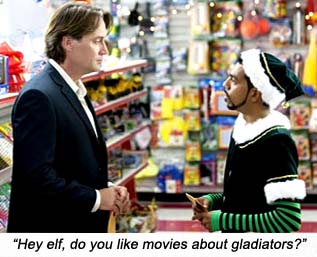 In this cheap, cloying syrup-fest, Kevin stuffs his man-frame into THE SANTA SUIT, another tired exercise in demeaning profit as evil and elevating poverty-stricken people as unequivocally pure. Sigh, let’s get this over and done with…

Sorbo is CEO of a toy company and he’s evil (cos he’s a CEO, see?). Santa Claus appears to him at a board meeting where he is deciding evil things (like turning a profit for his company) and turns him INTO Santa himself – that is, we still see Kevin Sorbo in a navy business suit, but everyone else sees him as Santa Claus in a jolly red suit.

Magic – the last refuge of wizards and dullards.

Of course, everyone thinks Kevin is a Santa impersonator (because Santa isn’t real, right?) and considers him a crackpot for insisting he is the CEO. Unable to look like anything but Santa, Kevin must get a lowly job, ironically, as the sitting Santa for his own department store, on minimum wage, where he discovers how evilly his own company treats its employees (fines them if they don’t make quota, etc.) and that the toys his company makes are evil (i.e. they cost money).

In the end, Kevin-as-Santa is so affected by one mother’s tale of woe (that she can’t afford a special doll for her daughter) and so imbibed with the lower class spirit of financial desperation, that he breaks his own department store’s window to steal one of his own company’s dolls for that little girl. But in a world where Santa exists, why did the mother have to worry about buying the toy in the first place? Wouldn’t Santa provide? Or is that how Santa provides – by stealing?

THE SANTA SUIT only proves what I have always maintained – that crime at the highest levels (i.e. corporate policies of greed and unethical practices) *creates* crime at lower levels. It matters not that the crime was committed “with the best intentions” – the Law will apprehend you and forcefully head-first you through the revenue-collection machinery before any of that is taken into account, if at all. Yet THE SANTA SUIT goes nowhere near this social disparity faced by every First World society. Nor does it address the fact that in a society where Santa really possessed such wild magic, there would be no crime – for he would prove his existence every year when anonymous gifts appear under the tree when people were “being nice”; the exponential spread of “niceness” (whether done for rewards or in earnest) would cancel out crime and unethical practices; also, magical granting of wishes would negate the need for stealing; mountains of philosophy can be built on Santa’s existence…

Instead, we are force-fed the platitude “Now you understand what it’s like to be a giving person” —

And I think something broke inside my TV when I kicked it over.