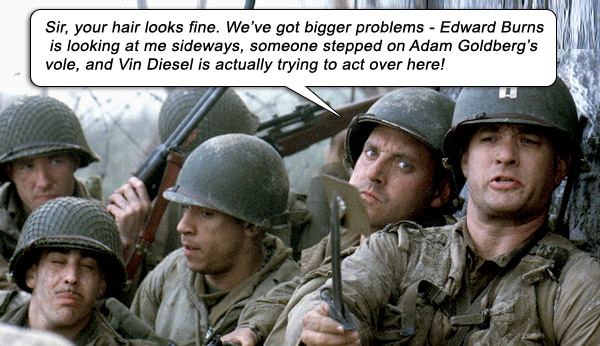 What if the United States Military actually possessed a shred of decency and humanity? Shyeh! What if.

In SAVING PRIVATE RYAN, the people who type the “Sorry Your Son’s Dead” letters for the Warmongers Who Send Sons Off To Die notice that three letters are addressed to the Ryan family of Anytown USA. Seems three brothers have been killed in the name of assuaging the small-penis insecurities of the American government. There is one more Ryan boy presumably still alive, and the Warmongers Who Send Sons Off To Die now send America’s Favorite Son, Tom Hanks, to snatch the last Ryan from the belly of the beast, intending to send him home honorably. Shyeh! What if. 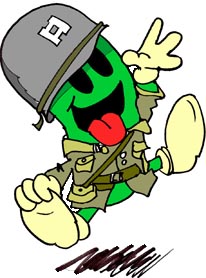 SAVING PRIVATE RYAN is the war movie by which all other war movies will be measured – not for its implausible premise (written by Robert Rodat) and typical propagandistic slant, but for its revolutionary depiction of battle scenes, more brutal than any ever committed to film. Visceral. Nightmarish. Incendiary. Words cannot do justice to the ferocious spectacle and gutshock aftertaste of the opening Normandy invasion.

After the surety of hand he displayed with disturbing violence in his Holocaust epic SCHINDLER’S LIST (1993), director Steven Spielberg turns his camera on a very American World War II story.

We meet the Yanks stepping onto the beach at Omaha, the sea more blood than brine, in a frontal assault on the Normandy coast that is going horribly wrong, as the German fortifications on the shoreline mow them down ruthlessly. Steel crossbeam obstacles called “hedgehogs” stick nefariously up from the sand in the low tide; planted to mutilate the undersides of boats as they attain the shore – if the tide had kept the hedgehogs hidden underwater – now they ironically provide the only cover for the American troops in a searing firestorm.

During this blood and bone tempest we meet Captain John Hiller (Tom Hanks) trying to stay alive yet move his troops closer to the German machine gun nests and take them out. We are in the crucified heart of the battle, blood on the camera lens, rain dirt muddying the view, machine gun rounds slamming and pinging past like fireballs, gray-green desaturated filmstock and a lens flare sheen around the film edges; internal body parts, severed limbs, ear-numbing explosions; a grimy, hellish, embracing maelstrom of frenzied death.

Spielberg and longtime cinematographer Janusz Kaminski capture what has never been captured in depictions of battle – desperation, futility, the overwhelming randomness of slugs whizzing by and claiming lives, medics wasting morphine stabs on dying soldiers; confusion and screaming, bodily fluids and exit wounds, intestines mixing with mud – simply the most authentic Cinematic War we have ever seen.

Battle visuals in RYAN are so disturbing that in 2002 when the call to arms came from the gutless warmongers Bush-Cheney, it’s a wonder anyone answered it at all – which only shows what a bunch of mugs the American armed forces are, or anyone infused with the erroneous attitude that military might is a political problem-solver.

Hiller’s mission to Save Private Ryan is painted as a spark of humanity illuminating the gross inhumanity of war. YET. The high command’s decision to send a son home to his grieving mother can only be for one reason – not moral, ethical or humane – to make a future politician look golden. 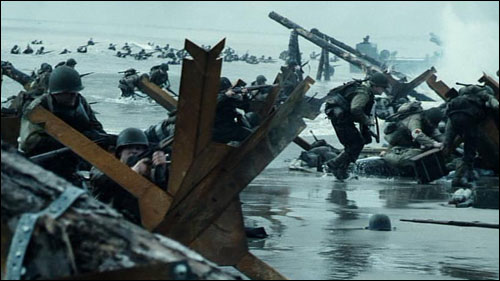 Spielberg’s Omaha Beach: if it were any more real, it would be real.

And even that quiet time is starkly disturbing, poignant, heart rending, accompanied by a majestic score by Spielberg longtime composer John Williams. This is not your John Wayne/Richard Widmark grimacing melodramatic characterization; the characters in RYAN are drawn in true blood, every bad decision, every disconsolate look, every unsolvable moral conundrum, scarring straight to our all-too-human guts.

Captain Hiller feels every bladed inch of the Shakespeare axiom, “Uneasy lies the head that wears a crown” (Henry IV). He is the victim of one bad decision after another, not all his fault, but for his shoulders alone to bear. Each man who dies under his command takes him “one step farther from home.”

Very cool to see Paul Giamatti, Dennis Farina and even Ted Danson in small key roles. Be sure to watch for Nathan Fillion (soon a cult fave in FIREFLY!) as the tearful wrong Ryan… And when Hiller’s troop does find the real private James Ryan – he is Matt Damon, acting the hell out of the Concerned Face chapter of the Acting for Male Models handbook.

Though Hiller’s men grew to resent Ryan during their search, now they realize he is as confused and human as the rest of them, and though he’s getting a free pass home, his principles don’t allow him to desert his post or his brigade.

To climax the movie – another skin-searing battle sequence. Spielberg is now just having the time of his life: his crew have the formula down and we are once again struck speechless by the construction of the onscreen blitzkrieg that makes all other skirmishes on film look like Monty Python’s Batley Townswomens’ Guild Battle of Pearl Harbor.

Chilling – as Goldberg’s Jew struggles with a German and is stabbed slowly, deliberately; regretful – as Davies’s scaredy-cat Upham could’ve stopped the stabbing if he had just had the guts to run up a stairway instead of tearfully ascending in fear; twisted – as Pepper’s holy sharpshooter prays while he snipes that his lord keep his hand steady and his eye keen, “You are my tower, you are my shield” (which should be a morbid contradiction for Christians, that they will instead find reassuring – that “god” is supposedly on their side); disturbing – when Ribisi’s doc is mortally wounded and he stutters instructions on how to “operate” on him, even as his liver is mutilated and the last of the morphine is stabbed into his leg as he expires; amusing – as Sizemore is shot and is more pissed off at his gun jamming than at being shot; ultimately tragic – as Hiller’s dying words to Ryan convey his confidence in the unproven worth of humankind, and a simultaneous indictment that Ryan could never hope to live up to: “Earn this!… Earn it.” 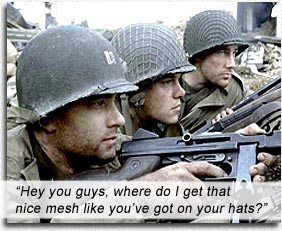 For a movie that stands helmet and shoulders above all other war movies for battle realism coupled with solid characterization, it is a shame RYAN’S premise is so godawfully maudlin.

For closure, a general narrates a letter written by the Warmongers Who Send Sons Off To Die, to Ryan’s mother on how the army is soooo generous for sending James Ryan home, misusing Lincoln’s words about her other sons being sacrificed on the “altar of freedom,” and generally making our flesh crawl with platitudes, euphemisms and shallow commiserations.

The overarching duplicity and mendacity of America’s involvement in WWII will be missed by everyone who regards these men as heroes (simply for dodging death and causing death, all in the name of a freedom which could have been retained by not entering the war in the first place). President Franklin Delano Roosevelt – much like George W. Bush declaring he was uninterested in empire-building – was voted into a second term by declaring he would keep America out of foreign wars. Which means the will of the people was AGAINST involving the United States in Japan’s invasion of China in the late 1930s. Yet as soon as he entered his second term, FDR set in motion schemes for entering the war by any means possible, including antagonizing Japan to force the United States into conflict. FDR’s oil and steel embargoes on Japan were the last straw, and America suffered FDR’s infamous “date which will live in infamy,” December 8, 1941 – Pearl Harbor – the greatest excuse for Warmongers to Send Sons Off To Die. You see, if FDR had actually stuck to his anti-interventionism/anti-war policies (which was the will of the American people) he could have saved not only private Ryan, but also Captain Hiller, adjutant Sizemore, medic Ribisi, private looker, private Jew, private goombah, private holy sharpshooter, and the whole godforsaken American army, navy and air force.

But that would entail America actually possessing a shred of decency and humanity.