Seen it once, SAW it again… 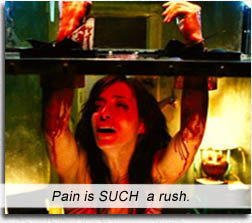 The opening scene of SAW II is as compelling and horrifying as anything you will ever see as a human being with pain receptors: A man wakes in a dungeon with an open bear trap locked around his neck, lined with nails. It is on a timer to snap shut on his head, but he is told where the key is to unlock it – surgically implanted behind his eye! A scalpel and a mirror are laid out before him… The question is not what HE would do – but what YOU would.

That’s the draw of SAW.

After this grand opening, though, SAW II (co-written by SAW’s writer, Leigh Whannell and the director, Darren Lynn Bousman) is on a tricycle downhill. Not all the way, but definitely not keeping pace with its powerful predecessor.

Donnie Wahlberg is emphatic as Matthews, the slightly unethical cop at the center of SAW II, whose son’s (Erik Knudsen) life is at stake. His partner though, Dina Meyer, recently graduated top of her overacting classes and brought her Method Of Smug to this production that just made me want to slap her after brutal spinner sex with her.

We feel Matthews’s pain and desperation as a father, as he watches his son on a monitor trying to escape a house of traps with six other strangers (Franky G, Glenn Plummer, Emmanuelle Vaugier, Beverly Mitchell, Tim Burd, Shawnee Smith); except for Shawnee Smith (reprising her role from SAW), the trapped characters are staples from the Clichéd Character Handbook – the beefy guy, the slut, the businessman, the bum, the token black guy – they got every “type” in there; it’s TWELVE ANGRY MEN meets the bus passengers in SPEED.

Each character is supplied with Nifty Exposition Dialogue, with any gaps in backstory filled in by Jigsaw (Tobin Bell), his Exposition Monologue Handbook open on his wheelchaired lap.

But the game is not as compelling as that which Jigsaw played in SAW. The people traps are not as insidious or as smart as those in the last movie. Therefore, the gore seems more gratuitous, rather than organic. And someone should probably do a psych evaluation on Australian writer, Leigh Whannell – to say this guy’s imagination is morbid is a nice way of saying he’s a latent maniacal serial killer…

The story itself is loaded with twists and reveals and surprises that keep ramping up the stakes, twisting the barbed wire tighter around your chest, all filmed in that sickly green hue that makes you think you just vomited.

The original SAW had a reveal at the end that rivaled Shyamalan’s THE SIXTH SENSE for ground-shaking impact: We never saw Jigsaw coming. In SAW II, there can be no such surprise quotient any more – even though Jigsaw is menacing and ominous and intellectually superior – so they try hard for a shocking reveal, but it is forced.

Of course, with the SAW series, the title would mean nought if we didn’t get some juicy self-mutilation for the sake of escape, rather than the sake of being a supermodel.

Towards the end, there is a nice little wink to fans of the original SAW. Through an eye with a key surgically implanted behind it…