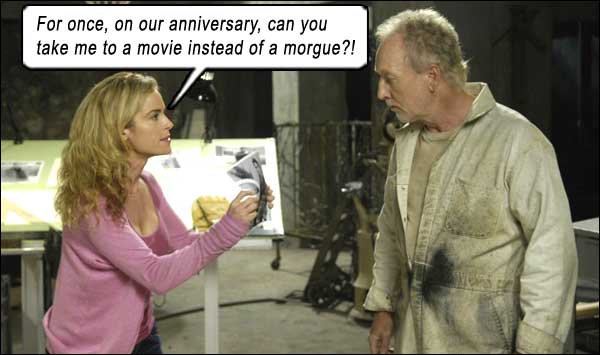 Jigsaw is dead. Lying naked on an autopsy slab. Skull being sawed open by morticians, brain being pried loose from its succulent base, ribcage spread wide, slippery organs removed (I’d love to know what surgeons think of this authentic-looking scene) – but wait! In his stomach – a micro-cassette tape!

Not foreseeing that Radio Shack would go out of business, Jigsaw is fortunate that detectives can still get their hands on an analog micro-cassette dictaphone. Lieutenant Martin Hoffman is called in (Costas Mandylor, looking vaguely like James Remar) to ponder Jigsaw’s taped message: “My work will continue. The games have just begun…”

This movie’s precursor, SAW III, wrapped neatly, tying up the Jigsaw story and the characters he was intertwined with from all three movies. There was nowhere left to go and no one left to creatively kill. Nonetheless, Darren Lynn Bousman (director of II and III), and new writers, Patrick Melton, Marcus Dunstan and Thomas Fenton, weave all the old threads in new directions. Maybe it’s the – excuse the pun – new blood of the writers, who, unlike Leigh Whannell and James Wan (SAW’s original writers/creators to this point), are not constrained by the old throughlines.

Movie opens with its usual creative torture-porn scene. This time, two men are neck-chained to a ratcheting device that pulls their chains closer to it. One of them has his eyes sewn shut, one, his mouth sewn shut. One is armed with a bale hook, one, an axe. Unable to communicate with each other, one ends up brutally killing the other to attain the key to his lock. Under his scream, the opening titles. 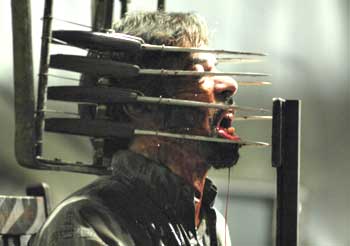 A creatively-disemboweled woman hangs dead in chains, written in blood on the wall behind her, “Cherish your life.” Remar Lite investigating. It’s Jigsaw’s modus operandi. In walks FBI Agent Peter Strahm (Scott Patterson, looking vaguely like Bob Odenkirk), who suggests Jigsaw has an accomplice other than the slight Amanda (Shawnee Smith in a one-second cameo), who can lift bodies onto meat hooks and other such manly tasks.

SAW IV is definitely not a stand-alone film, as characters from the previous three films are mentioned offhandedly and flit in and out of frame as if we know what’s going on. In an already-convoluted plot, the two main throughlines are Odenkirk Lite tracking Jigsaw’s “accomplice” and Remar Lite’s partner, Detective Rigg (Lyriq Bent) forced by Jigsaw to play a game of saving people in impossible situations.

Jigsaw aka John Kramer is once again Tobin Bell, and for someone who’s meant to be dead, we sure see a lot of him in this installment. In numerous flashbacks, we see how Jigsaw involved himself with all the victims introduced in IV. Jigsaw’s eternal motivation remains the same: teaching people to cherish life and not be dicks to other people, which he does by taking their lives and being a dick to other people trying to save them. Uhm…

I wonder what would happen if no one pressed PLAY? Or if Radio Shack goes out of business.

Remar Lite suddenly finds himself kidnapped and tied to a chair on a seesaw device, the person on the other side being the missing Detective Matthews (–who’s Detective Matthews?! I knew I shoulda boned up on a SAW marathon before watching this!). Donnie Wahlberg is Matthews (milling aimlessly since SAW II), suspended by his neck, standing on a melting block of ice, which, when melted, will tilt the seesaw towards Remar Lite, who will be electrocuted. 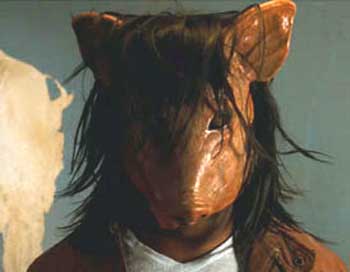 Meanwhile, Odenkirk Lite is yelling orders in walk-and-talk, like he’s on LAW AND ORDER, “Eric is still out there!” (–who’s Eric?) “Kerry was gone for four days!” (–who’s Kerry? – oh, she’s the disemboweled chick. I think.) He walks into a hospital, “Jill Tuck – where is she?” (–first of all, WHO is she?) Introduced in SAW III as Jigsaw’s ex-wife while I wasn’t paying attention, here Jill Tuck (Betsy Russell) is a suspected Jigsaw accomplice, and has a large role of expositing Jigsaw’s backstory and motivation, or as some might call it – Making It Up As You Go Along.

Jigsaw was a brilliant engineer, diagnosed with brain cancer, who planned their baby with meticulous care. When a drug addict accidentally kills Jill’s unborn baby, Jigsaw starts his crazed crusade of teaching people life lessons. Hence, his graffiti in blood at all the murder sites, “See what I see,” “Feel what I feel,” “Four walls build a home,” and the old favorite, “Cherish your life” – the motto from Jill’s drug clinic twisted into “this manic torture mantra.”

As far as slasher movies go, the SAW franchise has staked its place among the pantheon of blood and bone fests. SAW IV, filled with improbable traps within traps, choices that are not really choices, gratuitous gore and people driven to insanity with their amoral decisions, actually raises the series up from the mire it was bogged in. And those pig masks are pretty damn scary.

Jigsaw himself possesses quite a fearful countenance. When he quietly tells an addict to stop causing a scene in an emergency room, it’s scarier than any person wearing a pig mask attacking you with a knife.

There’s a time-loop factor involved in the ending, which seems the only contrived piece of plot. Odenkirk Lite follows a lead to a warehouse – alone. (Now why would this FBI maven do such an ill-advised thing when he has the full force of the FBI behind him in this time-sensitive investigation?) There he runs across – Angus Macfadyen screaming about his dead wife (– wait, who? Watch the rest of the series, newbie!). Which means this movie is taking place congruently with SAW III! An interesting juxtaposition, that means the opening scene of Jigsaw on the slab takes place AFTER this whole movie. I’m confused. Is this what the makers of SAW are banking on? You betcha!

Because the games have just begun. I’ll take your word for it, Jiggie doll.