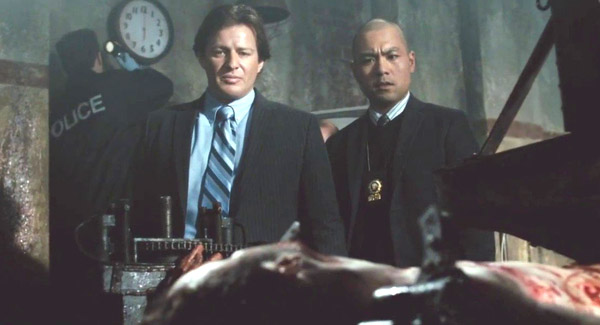 SAW V opens with its now-characteristic gore-porn, that gives the victim a torturous choice, in this case, be sliced in half by a swinging pendulum, Edgar Allen Poe style, or stop the swing by crushing your hands to dust in vices. The victim opts to mangle his hands, as penance for his past sins – but the pendulum continues its swing and gradually slices his body in two. All through the gruesome disembowelment, the victim is screaming, “Fuck! Oh fuck!!” And the tragedy of this society is that the movie is R-rated NOT because of the gratuitous gore or the self-mutilation – but the swearing. (If only we could entrap the Gutless MPAA in one of these SAW devices. Then they could discern what is worse: crawling through razorwire or swearing while they’re doing it.)

SAW V continues exactly where SAW IV left off, so get your popcorn-fueled SAW marathon on before coming to SAW V, or you’ll be left in the dark like a woman wearing a pig-mask with her hair twisted through a vice… When Scott Patterson realized he looked like Bob Odenkirk, it was much too late.

Agent Strahm (Scott Patterson, on the trail of Jigsaw) shoots the innocent Angus McFadyen (who was searching for his daughter since TWO movies ago), then is assaulted by a pig-mask, and injected into unconsciousness. He attains consciousness with his head entrapped in a Perspex cube, filling with water. And there is no spiel from Jigsaw on how to escape the trap.

And that is where the movie slips up. Jigsaw’s modus operandi is ALWAYS to give his victims a choice on mutilating themselves to escape. There is no choice here – the cube starts filling up with water, and Strahm is meant to die with no means of escape. Why not then simply kill Strahm with a lethal injection – or a gun?! Why go to all this trouble if there is no option of escape, no “lesson” to be learned?

Meanwhile, Agent Hoffman (Costas Mandylor), whom we now know is working with Jigsaw (although you wouldn’t know if you didn’t popcorn the last installment), is playing the hero for the arriving police; the only one to escape the factory complex where he was “trying to save” all the other dead agents, including Rigg (who’s Rigg again? – Popcorn!).

Suddenly – Carlo Rota! I’ve loved this character actor since his down-to-earth portrayal of Brian’s boss in QUEER AS FOLK (2003). I could watch him in anything! That calming voice and demeanor. Here, he is part of a five-person menagerie of victims, all connected in devious ways, all tasked to compete with one another in a series of deadly rooms, each successive room taking them closer to freedom. This sub-plot has nothing at all to do with the main plot, except to put five people’s lives in jeopardy. Get it?

Along with Rota, as one of the five, there is brown-haired beauty Julie Benz! As luscious sweet as Rota is alpha cool! Smokin’ even without getting her gear off, although blonde suits her better. Greg Bryk, a familiar That Guy, as another victim; his final task of willfully running his hand into a buzzsaw, webbing of the fingers first, will kick you in the nuts. 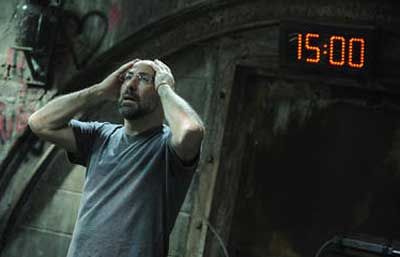 When Carlo Rota realized he was in a SAW movie, it was much too late.

Meanwhile, in Movie Number 1, Strahm pursues Hoffman, knowing him to be Jigsaw’s accomplice, while Hoffman sets up Strahm to look like the Jigsaw killer, while the movie flips around in space-time so much that when Jigsaw himself (Tobin Bell) turns up again and again – yes, the guy who died two movies ago – we don’t even question him doing dirty deeds any more.

Over the course of the movie, the two retained writers from SAW IV (Patrick Melton and Marcus Dunstan) connect SAW V to every movie in the series that preceded it; we see snippets of Danny Glover, Shawnee Smith, Bahar Soomekh, Donnie Wahlberg, Lyriq Bent, Athena Karkanis, Betsy Russell… and there’s Al Sapienza as police chief (forever Mikey Palmice from THE SOPRANOS!).

New director David Hackl takes the reins from Darren Lynn Bousman, and ramps the primal terrors to visceral new heights. If we enjoy this blood-gushing movie, doesn’t it say something about how damaged we truly are as a species? Doesn’t the pushing of the carnage envelope rob us gradually of more and more humanity? Maybe so. However, Jigsaw mitigates his murders with morals, telling his devotees that he is putting his victims through their tortures to purge them of sin, to teach them to “cherish their lives.” In this way, our shadowed consciences can gawk like bystanders and come away supposedly unscathed…

Have to admit, something about SAW’s twisted conundrums is compelling, even though we regularly “fall out” of the movie with the elaborateness of the torture devices, which would be impossible to construct throughout warehouses in Los Angeles without someone detecting them! How come no detectives have yet contacted the vendors that supplied all the raw materials for these clockwork death traps, to trace Jigsaw’s steps? Jigsaw calls the pendulum “inferior work” because it is made by one of his imitators – but that’s one of the most elaborate gags we’ve seen! What is he basing his criteria on? I’m sure he’ll tell us soon enough, whether he’s alive or dead.

Jigsaw, can I have a choice? Watch another SAW movie – or put my face in a blender.