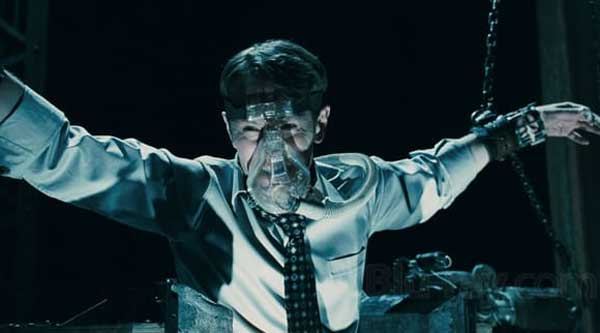 “Will this psychopathic kidnapping be covered by my health insurance?”

Would you like a little Death to go with your Life Insurance?

Jigsaw’s back, and this time – he’s killing Health Insurance reps! And I think I speak for everyone when I say, “And?”

It’s SAW VI, and vigilante Jigsaw (Tobin Bell, as ominous as ever!) has been terrorizing us for so long now (since 2004’s SAW), it was inevitable he would be re-appropriated into an unlikely hero. With the American “healthcare” system in such a shambles, we cheer his choice of victims this time ‘round. The “games” (as Jigsaw likes to term his murderous traps) are the best parts of the movie, even though we really don’t care whether any of his victims live or die. Mostly die.

SAW VI opens with two people entrapped in cages: a fat guy and a fit chick. To escape, they each need to offer a “pound of flesh” from their bodies, dropped onto a scale. At the end of 60 seconds, the person offering the most flesh is freed, while the other is killed. Suffice to say they wear fatal metallic headgear, with complex machinery registering their offered body parts. (We don’t even think about the non-believability of these intricate traps anymore – it’s part and parcel of our suspension of disbelief in any SAW movie.) The fat guy bunches his belly blubber and starts sawing it off in gruesome screaming pieces, while the skinny chick cannot think of any useless part of herself to sacrifice that matches the weight that fatty is dropping on the scales. So she hacks her arm off!…

What made this cold open bearable was that both people were predatory lenders, rather than the usual ambiguous victims. Long-time SAW writers Patrick Melton and Marcus Dunstan hit on a milieu of victims for which nobody would shed too many tears! (If only they’d latched onto this angle earlier! – could’ve gotten rid of so many lawyers and tax collectors and Pharisees.) And director Kevin Grautert (editor on SAW II, III, IV and V!) keeps the killing tone exactly the same, except now it’s positively enjoyable!

Unlike many of the SAW movies, you don’t have to popcorn overload on previous SAW entries to understand this one, because the filmmakers have done their contextual homework in succinct flashbacks. We see the ending of SAW V, in which Detective Hoffman (Costas Mandylor) cons Agent Strahm (Scott Patterson) to his death, whilst framing him as Jigsaw. So when Strahm’s partner, Agent Perez (Athena Karkanis), is brought back from the dead for this film (she was most definitely killed in V!), we understand her motivation in fighting for Strahm’s innocence. This is so the hunt can turn to Hoffman, the real killer.

There is also backstory involving Jill Tuck (Betsy Russell), Jigsaw’s wife, who busily goes about fulfilling Jiggie’s post-death wishes. And of course, there is dead Jigsaw, who, as in the last movie when he was dead, has more screentime than when he was alive: “Once you’ve seen death up close, then you know the value of life.” (Don’t you mean to say: “Once you’ve been dead for two movies, then you know the value of screentime.”?) He’s meticulous, thorough, far-planning, yet for all his ingenuity in creating those industrial steampunk torture devices, he can’t make one video recording without grainy noise or interference like he’s taping on a used analog video cassette from the 1980s while near the airport…

There is hot blonde reporter Pamela (Samantha Lemole) trailing Hoffman, and even Amanda returns (Shawnee Smith), but is left with nothing to do except be available for plot points.

This time it’s personal! John Kramer aka Jigsaw, riddled with cancer, visits the CEO of a health insurance company, Erikson (Mark Rolston), to plead for coverage for an experimental treatment. He is, naturally, declined – because we all know this is absolutely NOT how you apply for health insurance, but I guess the filmmakers wanted a face-to-face confrontation, and have Kramer do his Jigsaw voice, “So you choose who lives and who dies?” (An ironic take on his own role in these SAW-fests.)

Erikson has a staff of six young hardbodies whose only job is to find discrepancies in insurance claims so that Erikson’s company can squirm out of paying them. Kramer should have petitioned these dishonorable swine. Even then, how do you get past the phone menu that would drive anyone to create homicidal Jigsaw traps?

Of course, Erikson wakes up strapped into a torture device, and his Diabolical Six strapped to a carousel of death. Health Insurance pricks. No one’s complaining. 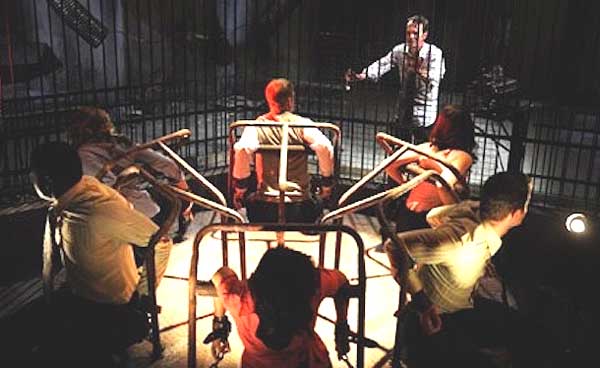 Q: What do you call six health insurance reps on a carousel of death?
A: A good start.

Erickson is faced with the conundrum of allowing only two of his Swinish Six to live, as they spin on the carousel with a shotgun pointed at their chests. If it were up to me, these people whose job is to willfully deny other humans the right to health care, can ALL go to hell, or whatever suffices for that damnation in their respective hokey religions. Each young staffer pleads for their lives, and I understand the three men’s offers of riches and servitude, etc, but what surprises me is that none of the three women offers to be a suck-pig for Erickson in perpetuity. That’s definitely a card that women play. All the time. Why not in this R-rated movie? Too much respect for insurance assholes?!

Erickson’s first unwinnable “game” is to choose between his secretary (an old woman riddled with ailments, who would fail to be insured by his own company due to pre-existing conditions, but with many loving family members) and his intern (a young, lonely guy who would die without a trace, yet his whole life is ahead of him). After six movies, SAW is still doing what it does best: With each character’s conundrum, it’s really about “What Would YOU Do?”

The sloppy screenwriting between the trap sequences is the failing in SAW VI:

Finale finds Hoffman double-crossed for no reason, a bear trap of his own clacked onto his head. But instead of his life flashing before his eyes – all six SAW movies flash before his eyes!