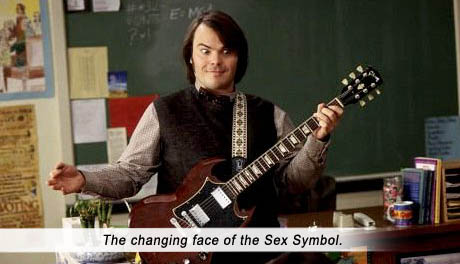 A beautiful rarity when an actor is bequeathed a role that envelops him (in the words of Ace Ventura) “like a glove.” This movie IS Jack Black. And Jack Black IS this movie. Had he not piloted SCHOOL OF ROCK like a deranged Timothy Leary by way of Keith Moon, it would have coagulated into limp-wristed Disney clichés and bilious sermonizing.

As it is, it still requires a surfeit of “suspension of disbelief” sturdy enough to knock over an elephant, as the story of a rockstar wannabe impersonating a substitute teacher and leading his class to rock glory in lieu of schoolwork is quite idiotic – but we don’t focus on this lamebrain premise as much as we should because Jack Black eats alive every frame he is in, erupting so much hilarious energy into even his simplest chatting scenes, that he somehow salves any gripes we may have with plot inadequacies.

There hasn’t been anyone this shameless since Bill Clinton. 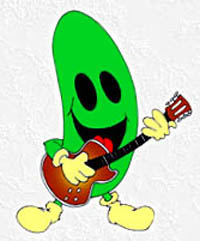 We meet Black as rock fanatic lead guitarist Dewey Finn, fired by his garage band, jobless, squatting in the loft of his best friend, Ned Schneebly (Mike White, the film’s writer), who is Every Man’s Worst Vagina-Whipped Casualty (the vagina doing the whipping, the great Sarah Silverman, playing Ned’s shrike all too well – now that’s a whipping I might also be able to live with!). Dewey accepts a substitute teacher post under Schneebly’s identity, rationalizing the duplicity as beneficial since he owes Ned much back rent. And thus does Dewey commit sin after rationalizing sin, yet providing such consummate entertainment that we rarely contemplate his immoralities.

In his guise of substitute teacher, Dewey stumbles across a substitute band – the young kids of his class – to fulfill his lowbrow scheme as contender in a Battle Of The Bands (intentionally, we hear The Who’s “Substitute – your lies for fact…”). Enlisting their musical aid as if it were a school project, Dewey’s initially duplicitous scheme transcends its meanness when, in his quest to achieve small-time stardom, Dewey ends up imparting profound advice to all and sundry, as well as educating his class (and the viewer) with the many facets required to make a rock show roll.

The children are thankfully not the usual clutch of precocious, spoiled, irritating, screeching pig-brats we are usually served up in movies of this ilk – the boys are actually likable and the girls are actually cute – finally, kids who act like KIDS!

This is also one of those rare films that pays attention to its music synchronization (except for a short, dodgy classical passage).

One aspect which annoyed me personally was the widespread notion that WE KEYBOARDISTS are non-stop NERDS: Dewey bequeaths Lawrence the keyboardist Yes’s Fragile album – why not Machine Head or Demons & Wizards for the Lord or Hensley stamps of majesty and showmanship? Why not a Hammond XB juggernaut to smack down the thunder, instead of the furiously metrosexual Yamaha synth? As a musician of 30 years who has shredded and smashed the hells bells out of my share of keyboards, let me assure you that Lawrence’s end jamm solo was totally shirt-lifting – put some STANK on it, fey keyboardist dork-stalker! To get those audience panties wet, play in the same mode as Guitarists (the pentatonic mode) – throw that classical noodling out! The first lesson of the School Of Rock: it’s not how good you ARE – it’s how good you LOOK. So start by standing with those legs apart, for the love of– but the damage is done yet again… 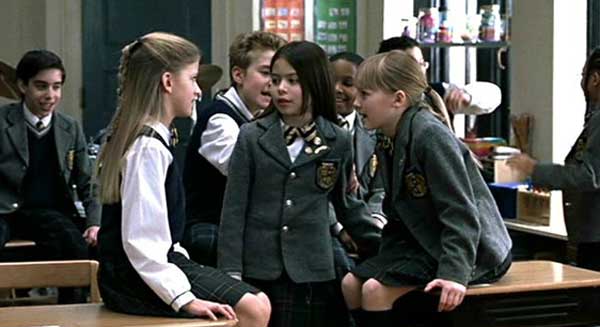 Contemplating the merits of Jack Black versus Harry Styles.

Dewey is incorrigible! He does not arc from selfish cad Bad Boy to mushy princess Home Girl – his third-act epiphany allows him to admit his selfishness and mendacity, even whilst retaining those base natures! For the wheels of his con were so firmly in motion that everyone simply had to ride it out.

All his displays of concern and inspiring pep-talks – over the keyboardist’s lack of cool, the drummer led astray by Poseurs, the fat girl’s insecurities, the guitarist’s bullying father, even his tentatively romantic overtures towards Cusack’s ice-queen Principal – were merely to cultivate his agenda. (That his actions were meaningful to the persuaded parties was merely a by-product of his false pretenses.) Yet, by film’s end, Dewey had gone from self-appointed El Capitano Band Leader, to praising “our” band. It was this small shift in stance that allowed his end to justify his means, otherwise, even in the movie universe, he would have met with Zeppelin’s Gallows Pole.

Black treads that knife-edge between sociopath and savior, milking the storyline like a blue-ribbon set of udders, for the pleasure of rock burnouts of the Alice Cooper generation (Pre-Comeback). High time! – enough with the 70s-disco movies, or the street-cred “alternative” soundtracks – here is a soundtrack with The Immigrant Song, Smoke On The Water and It’s A Long Way To The Top searing our aural cavities – unabashedly, unapologetically – not as satire or denigration, but as the embodiment of the lead character’s motivation. These same tracks having driven at least three generations to long hair, cheap pot and bad fashion, why has it taken so long for film-makers to “get” it, groove it, milk it, market it?

Much like Black illustrating the street-greeting to Lawrence, this movie is one big Secret Handshake to crazed musicians of all disposition, crammed as it is with rock-scene esoterica. A flashback sans LSD.

SCHOOL OF ROCK 10-Year Reunion!
What a poignant showcase! The kids from the movie actually still playing 10 years later – and playing well! Except for the keyboardist – who is still a non-stop dork! And didn’t we all know that blonde backing vocalist would turn out super-hot?!