In medieval Europe, Nicolas Cage and Ron Perlman must transport an alleged witch to a faraway monastery for the monks to decide her fate. Let the comedy begin– I mean, drama– I mean–cough–hairstyle. 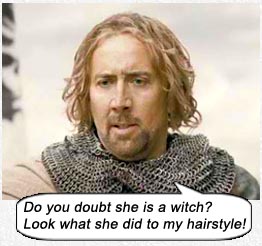 SEASON OF THE WITCH has all the makings of a solid supernatural thriller, with an excellent, hair-raising opening sequence (a monk hangs three “witches” from a bridge – one of them proving to be what she is superstitiously accused of being, and comes back to life to hang the monk!), but as soon as we meet Knights Behmen and Felson (Cage and Perlman) in ill-fitting Crusader garb, speaking with their modern American accents, we start to suspect that not enough research went into the authenticity of the medievalism…

Once again I ask this pertinent question: If Monty Python, on budgets of a few hundred thousand, could make movies that look like they were actually shot in Medieval Times (LIFE OF BRIAN, JABBERWOCKY, TIME BANDITS), how come these movies with budgets of millions can’t make Medieval Times look like we’re not at the theme-restaurant of the same name?

Enough pondering. On with silly movie, itself cursed by alternating somber and hokey sequences.

Somber: After being forced to kill women and children by “the infallible voice of God” (monk Brian F. O’Byrne, the assassin from THE INTERNATIONAL), they leave the Crusades in remorse, and come upon a village that has captured a witch suspected of causing a plague in the vicinity. Behmen and Felson are empowered to transport her to a monastery 300 leagues away (whatever that means – remember those giants with “seven-league boots”?), so that the monks can raise the curse she has put on the village…blah blah – any excuse to get six men on the road with a witch and watch them die mysteriously one by one.

And the witch (Claire Foy) being a hot young spinner is the only thing keeping us watching after the next hokeyness assails us. (There’s always that unspoken promise in the back of our heads that maybe she’ll frolic naked in the forest or engage in bestial sex with the devil…)

The straightforward road-trip story by Bragi F. Schut is taken seriously by director Dominic Sena, and there are sequences that by turns are nail-biting and intriguing – but a bombastic, cruddy, effects-laden denouement involving magic and bat-winged demons turns this movie into a newt.

And, unlike John Cleese, it doesn’t get better.