The Love That Dares Speak Its Name.

I like the little way the line runs up the back of the stockings…
— David Lee Roth, “Everybody Wants Some.” 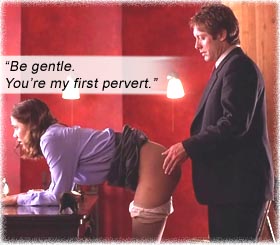 BONDAGE: Her neck cuffed with a steel horizontal bar, her arms cuffed outstretched to that bar, in crucifixion position – while performing office duties.

DISCIPLINE: Lean her over the desk and spank hard with your naked hand until her skin is purple – punishment for a typo.

DOMINATION: Over the phone, order her specifically – on what to eat for dinner.

SUBMISSION: Strap a saddle to her back while she’s on all fours – on her office desk.

They probably don’t show SECRETARY as an office training film on sexual harassment.

Young Lee Holloway (delectable Maggie Gyllenhaal) is a self-mutilator. Her dangerous attention-seeking shenanigans stop once she scores a job as secretary for crazy-eyed Mr E. Edward Gray (James Spader), a manic superfreak who punishes her typos by leaning her across his desk and spanking until her botty is flaming blue. “Now straighten yourself up and go type it again.”

Sado-masochism. Not easily understood. Too gutless to speaketh Its Taboo Name. Something so wrong – so right.

SECRETARY trammels the dark recesses of society’s inhibitions and throws open the curtains with syrup-stained pants.

From a short story by Mary Gaitskill, screenplayed by Erin Cressida Wilson and insidiously crafted by director Steven Shainberg, SECRETARY seems to provide a simplistic solution to girls who cut themselves – they just need a good spanking; match them with a dominant who provides the pain they crave. Only after Mr. Gray lays into her for a few months does Lee gain the courage to throw away her cutting implements. Well, think of it any way you please. That’s the very freedom that SECRETARY advocates.

SECRETARY dares us to comprehend the dominant-submissive lifestyle. It is full frontal, no apologies, no prisoners. Either audiences will pretend these characters arc from their “perverted” lifestyle to a “normal” one – or audiences will perceive the truth: that these characters arc from a dull “normal” lifestyle to acceptance that they are outside the norm; embracing it. Pouring syrup on it.

Due to societal inculcation, even Lee and Mr. Gray doubt they are mentally balanced. James Spader puts Mr. Gray through twisted psychological hell, manifested in tics and sudden facial expressions that are hilarious on the surface, but illustrate a man battling “demons” – called demons only by society. He doesn’t trust his sexual proclivities are “right” because society has inculcated an aversion to dominant-submissive relationships. It takes him awhile to accept it’s okay to love with syrup on his pants.

Remember when being gay was taboo? Once, it too had the shuttered ostracism that bondage still does. Now being gay is almost a fad. It’s “in” to be “out.”

And Gyllenhaal’s nuances unveil a desperate pathos in Lee, who has also been inculcated in “proper” love, yet finds herself liberated for the first time sexually and psychologically when Mr. Gray starts his dominance. When Gray stops the beatings for awhile, due to his doubt, she tries to provoke them with all manner of typos and bad-girl behavior.

In a fit of sexual urgency, Lee accedes to sex with her peripheral boyfriend – but does it with all her clothes on, to feel like she’s not cheating on her “lover,” Mr. Gray (who doesn’t actually have sex with her, but whose spankings satiate her). Hardly touching, hardly moving, she tries to recreate what society tells her she should be craving; it lasts as long and is as satisfying as you would imagine the nervy Jeremy Davies can make it.

All the good little perves in the audience (I’m talking to myself again) are rewarded: Maggie Gyllenhaal wanking in a toilet, fantasizing, saying, “Cock,” and “Put your prick in my mouth, Mr. Gray,” and – most tellingly – “I’m your secretary!”

For those who may still doubt why SECRETARY is revolutionary, let’s be – ahem – explicit: it’s not the sex (although the portrayal of it is quite heady); it’s because this movie makes a brave statement about a lifestyle that is usually relegated to peripheral punchlines (the gimp in PULP FICTION, the Evil Fuckaire in CHEECH AND CHONG’S THE CORSICAN BROTHERS) and fleshes this life choice into a viable option.

In the final scenes, Gyllenhaal’s glorious frontal nudity, as Mr. Gray body-worships her – but then she starts TALKING, “Where were you born? Where did you go to school? What’s your favorite dessert?” at which point, he should have ordered her to SHUT UP.

In the film’s final shot, as Lee and Mr. Gray have settled into their outré life as dom and sub husband and wife, Lee looks directly into the camera; not sheepishly, rather, assuredly, as someone in touch with her honesty. Her look says without speaking, “Tell me what’s wrong with this life choice. I dare you to say this is not a happy ending.”

SECRETARY will challenge your notion of romance, alter your views about devotion, grind to dust your beliefs on perversion, and crap all over your idea of love.