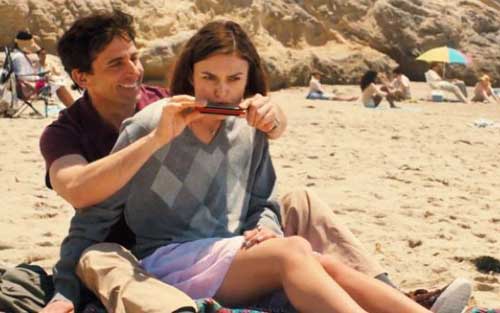 “C’mon, blow real hard and your chest buds will pop out!”

Who knew the end of the world would be so boring? With such good acting?

And apparently the soundtrack to the world ending is soft rock. Soft rock, people. The preferred music of societal chaos and megalithic destruction. So keep those Dan Fogelberg and Herb Alpert albums at the ready.

SEEKING A FRIEND FOR THE END OF THE WORLD, the first writer-director effort from Lorene Scafaria, is as cloying and maudlin as its title suggests. An asteroid is about to vaporize Earth in less than 3 weeks, and humanity takes this news in surprising, yet not surprising, ways. Whilst one man, on a quest to find his true love, finds true love on his quest.

We meet Dodge (Steve Carell) as he and his wife hear the news on the car radio, and she just ups and runs. In these first moments, we realize Carell is doing some grand underplaying, and his performance will continue to amaze throughout this meandering tale. The fact that he looks actually gaunt and handsome means he really worked hard for this movie in many ways.

There are comedic asides with Rob Corddry being his usual riotous ass-face, Patton Oswalt as a hilarious sex-perve, Adam Brody as the incognizant boyfriend (“I love you. I want to take care of you!” – then the shooting starts and he immediately uses her body as a shield!), TJ Miller camping it up as a waiter sporting champion flair, with Carell basically playing straight man to all of them. Yet stealing all their thunder elegantly. His roles in DAN IN REAL LIFE (2007) and CRAZY STUPID LOVE (2011) were leading to this pinnacle. END OF THE WORLD is his best performance on film yet, as he sells each scene with realistic “small” reactions (nothing cinematic or showy), and almost unbearable sadness, futility and pathos. (It is this performance that would enable him to move on to the darker and more showy FOXCATCHER, 2014.)

The first act is enjoyable, as Scafaria poses a comedic scenario rarely seen in doomsday movies: to most people, life would go on the same as always; we are too ensconced in our pursuit of self-centered pleasures to let a small thing like the end of existence ruin our plans. But it’s all tinged with fatalism: dinner parties that turn into heroin parties, screwing a different girl every day, who (as Oswalt notes) “don’t care about getting pregnant, don’t care about diseases, don’t care about… a small dick, or – whether you’re related…”

Then the predictable love story kicks in. Oh god! Wake me when the yammering’s over.

Because as soon as the weeping Penny (Keira Knightley) enters through Dodge’s window with the cutesy line, “I won’t steal anything if you don’t rape me,” the end is surely upon us. Firstly, she’s implying that she thinks she’s worth raping, but no danger there, honey; not with that man-jaw and ironing-board chest. Secondly, even if we harbored any stray designs on those boy-like buns, they’re dashed to pieces as soon as she opens her non-stop yammering gob. Your boyfriend kicked you out? Nowhere to go tonight? These are well-understood clarion calls to the male of the species that gratitude-panty is imminent. Of course you can sleep at my place – but first let me get you a pillow and a nice hot cup of shut-the-fuck-up. I mean, really, maybe some guys just rufie chicks to get some frickin’ peace and quiet.

Dodge receives a dated letter from his high school sweetheart Olivia: “You were the love of my life.” With his wife gone, he decides to drive cross country to reconnect with her, taking Penny along to help her reconnect with family overseas. So it is quite obvious it never is about finding his sweetheart, but how to plausibly connect the two stars.

Though this is the movie’s planned direction, it has now completely lost its way. Comedy has ceased, replaced with a cynical cheerlessness. A late meeting with Martin Sheen as Dodge’s estranged dad skews the tone even more into uncomfortable.

Over the course of Dodge’s and Penny’s journey, they both come within grasp of their separate goals, but end up turning them down to be with each other. I guess the soft rock soundtrack was just too insistent, filtering them through a montage where they hold hands on a beach, and laugh and play like young lovers. The quiet moments between travel are filled with vanilla humanizing patter – more like she won’t stop yammering about irrelevancies and he won’t stop looking at her man-jaw and where her chest should be.

Enough of this yammering and he realizes he must be in love with her because hells bells he’s a 40-Year Old Virgin and there’s no one else around wearing a skirt.

A good aspect: this R-rated movie allows its protagonists to have sex before they achieve their goals. Most movies hold sex as a sacred threshold of true love; at least Scafaria respects these people as adults, saying that sex is not the reason they are together as the sky falls. However, this gives away the ending, as we now know Dodge is not going to end up with Olivia: you see, if the story was truly aiming him at Olivia, he would not have been “allowed” to have sex with anyone before Olivia, or his character’s ethics would be compromised. Immature but true. Ask any Gutless MPAA official.

An annoying aspect: No one on Earth is doing anything remotely noble EXCEPT DODGE AND PENNY – because they’re in love. Everyone else trying to fulfill their fantasies in a flash is painted as wrongheaded. Why is Oswalt screwing a different woman every day regarded as a desperate, ugly man, whilst Dodge’s parting mewl to Penny, “I love you desperately,” is regarded as something decent and righteous? (In fact, Oswalt is doing something more noble for humanity by propagating the species, whilst Dodge is the desperate one who “doesn’t want to die alone” so creates this illusion called “love” to pretend some kind of connectivity. Let’s see how not alone you are when the skin starts searing off your bones and your thinking organ is vaporized.)

Penny is a “hypersomniac,” which means she can sleep through anything. When it comes to this movie, so should you.