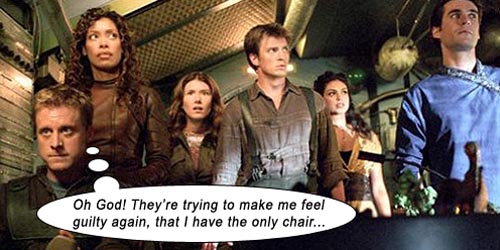 A ‘verse not big enough for Joss Whedon’s ideas.

Up in the sky! It’s a bird! It’s a plane!…Well, it’s kinda both. It’s a goose-shaped spaceship called Serenity.

SERENITY is the big screen version of the small screen series FIREFLY (unfortunately cancelled after just one season). Written and directed by Joss Whedon, it’s bold and brash and throbbingly original even as it pulls every trope from the science fiction and action thriller handbook.

SERENITY is not exactly stand-alone. I find that every angle I come at it – as an objective observer, as a fan of good science fiction, as a fan of morally ambiguous characters – for SERENITY to work, there is that necessary connection to the bigger universe (nay ‘verse) of the television series which fleshed out these characters before we ever met them in Moviedom. If you’re coming to Whedon’s space opera blind, there is the tendency to ask: Just who are these people and what do they want with my willy? 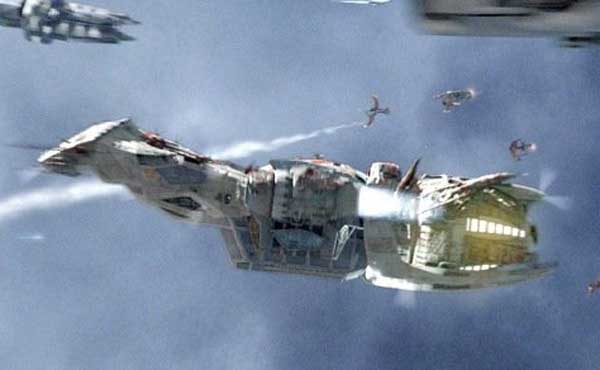 Movie opens at Exposition Central: a recap of Earth-That-Was and the global war that drove Earth into terraforming outer planets. Now if this movie had stayed with the theme of planetary conflict and played our outlaw heroes against that backdrop, subsisting on contractor guerilla jobs while serpentining across the galaxy to avoid capture, that would have continued the enjoyable dynamic established in FIREFLY. Instead – River Tam (Summer Glau).

River’s mind was a government experiment. She’s a psychic, or empath, or whatever the street cred term is now. Rescued by her brother Simon (Sean Maher), they are both passengers/fugitives onboard Serenity (he is also the ship’s doctor). Over the course of the TV series, Whedon had plans to gradually unveil River’s grand arc, and since the series was cancelled, he chose to use this 2-hour swashbuckler to finalize that arc, skewing the attention away from the other lovable characters. And it’s distracting. Because we realize all the characters’ motivations, actions and reactions are driven by River’s presence and ultimate “purpose,” whatever that is. (Now that’s not necessarily a bad thing, but we are definitely sacrificing other fun dynamics, that we relished in the series). The actual “heroes” are playing second fiddles! – Fillion as macho captain Malcolm Reynolds (Mal), Gina Torres as lethal first mate Zoe, Alan Tudyk as insouciant pilot Wash, Jewel Staite as cutie engineer Kaylee, Adam Baldwin as mercenary muscle Jayne. Even the sexual tension between the “companion” aka prostitute Inara (Morena Baccarin) and Mal, which had the tensile strength of Golden Gate bridge cables in the series, is downplayed in this movie so we don’t get tangled in subplot. Sure, all the characters get their time in the sun, but everything they do is predicated around River. 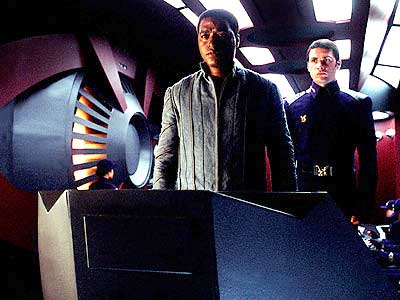 “I have commanded it! Now go – from my plastic set which screams Afternoon TV Series…”

Chiwetel Ejiofor is The Operative – great actor in a great role – chilling, eerie, emotionless, an assassin pursuing River for The Alliance (the evil gubmint, not the STAR WARS rebels). His fight choreography is cool aikido with katanas, and his stage patter is Bond Villain. But though he seems like an Orwellian cog in a system that he never questions, he is aware of his place in it: “I’m a monster. What I do is evil. I have no illusions about it, but it must be done.” (Well, now we know why he later did 2012 and SALT.)

The little things separate SERENITY from its ilk; as Whedon notes, he really wanted to break with traditional space movie tropes, so there is a unique combining of 1800’s American Western vernacular with futuristic spacefaring dialect – the dialogue, costuming and environment all reflect this verisimilitude; there are no Cantina Sequence aliens to be found anywhere in the galaxy, everyone is human – except the Reavers, who are mutated humans; the DP is Jack Green (Clint Eastwood’s man!) so we know we’re getting quality avenger hero angles; and there is no sound in space! It’s the little things…

And the big things? Surprisingly, the space battles rival Georgie Lucas. SERENITY is not overloaded with sky traffic and zwooshing star fleets, but when it needs to take us into the vacuum, it does so in the most authentic fashion. The scene where Mal leads a horde of pursuing Reaver ships out of a stellar cloud straight toward the Operative’s fleet is a sight to behold. And Operative’s reaction is worth the bittersweet laugh, “Target the Reavers! Target everyone! Somebody FIRE!”

That scene notwithstanding, there is not much levity on this voyage. It is much darker than the TV series, and almost trips into a bottomless pit with the malicious murder of preacher Shepherd Book (Ron Glass, a character whom I considered redundant anyway), as Mal descends into a fatalistic funk that makes his crew doubt his leadership.

Mal’s search for answers (to the River question, of course) will lead Serenity to a planet named Miranda, which they surprisingly can’t find on any charts. (‘Surprisingly’ because even if they can’t find a current planet by that name, Miranda is one of the major moons of Jupiter! I’m sure it’s not so far into the future that they’ve forgotten the nomenclature of the original planets and moons from Earth-That-Was. Why couldn’t they at least find Jupiter’s moon in the files?) On Miranda, they discover the origins of the Reavers, and a secret that The Alliance will kill to keep. River is somehow tied to this secret (because River is tied to everything, so sayeth The High Lord Whedon from his BUFFY THE VAMPIRE SLAYER lair…)

Their task now is to publicize the damning secret. Gee, if only the future had internet. The closest dial-up service is with Mr. Universe (David Krumholtz), and Mal’s fuuuurious anger at The Alliance’s lies to the people (“Half of writing history is hiding the truth”) makes him vow to fight past the Operative to send the secret out through Mr. Universe’s social media, “I aim to misbehave.” 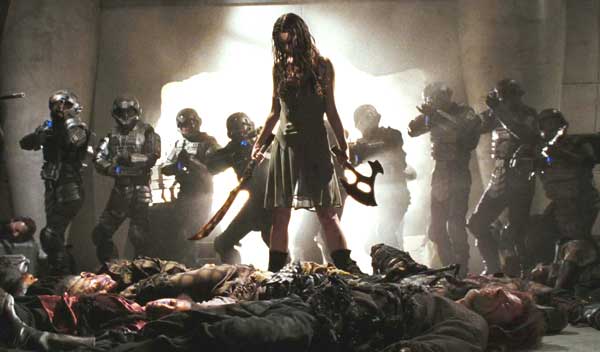 “Do you think we should shoot her now that we have these guns aiming at her and everything?”

River meanwhile, is falling in and out of cognizance as demanded by the level of trouble they’re in. When she’s “on” she is an unstoppable force. So to avoid being able to unleash this superhero killing machine at will, Whedon writes a Rain Man device into her character, where she is usually introverted and fetal-position, turning into a deus ex machina when our heroes are neck-deep or higher in shit.

Towards the climax, it feels like THE DIRTY DOZEN or THE WILD BUNCH or SEVEN SAMURAI, as each of the characters we’ve grown to love (or at least tolerate) is in actual jeopardy of being killed in a shootout (after all, this movie had no guarantee of continuing the series or making a sequel; it was a stroke of luck for fanboys that would never be repeated). Then the deus ex River happens, as she announces to her effete brother, “It’s my turn to take care of you now,” and becomes Uma Thurman against the Crazy 88s.

The last great rockstar battle is between Mal and the Operative, on a catwalk over a giant shaft with two giant spinning fans. Really? Was the set with the giant crushing iron things being used?

SERENITY closes with three grave markers. Sad. But on a note of outlaw hope, she rises into the overcast skies on Mal’s velvet leadership and the vapors of fandom. “I am a leaf on the wind. Watch me soar…”