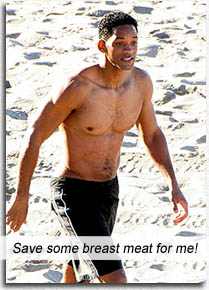 A love story that will disturb you. Now that’s more like it! But more than a love story. An emotional puzzle that won’t let you stop thinking about its implications long after viewing.

To say SEVEN POUNDS is powerful and moving is like saying a rollercoaster ride is mildly undulating. It’s Shakespearean, it’s Biblical; it’s a story that rivals the most tragic star-crossed lovers’ tales of the ages and makes the grandest Hollywood romances look downright HIGH SCHOOL MUSICAL.

Not just a chick-flicky romance; a profound exploration of sacrifice and the quality of life, of one man’s single-minded beneficence to seven total strangers, to absolve himself of the deaths of seven others.

Smith is Ben Thomas, an IRS collections man, whom we meet as he audits people, not just going through the motions but assessing whether they are “good people,” deserving of extensions or having the tax hammer brought down on them.

Interspersed with Ben’s duties are intriguing scenes, as he cusses out a blind customer service rep, Ezra (Woody Harrelson), berates a hospital administrator (Tim Kelleher) for mistreating an elderly woman, and practically stalks a heart patient, Emily (Rosario Dawson). All the while with a puss on his face that makes his sour mugs in I, ROBOT and HANCOCK look like Jerry Lewis as THE NUTTY PROFESSOR. There is something deeply troubling this man.

The trailers for SEVEN POUNDS give away nothing, which is bittersweet, because though I hate trailers that give away too much, for the longest time I didn’t regard SEVEN POUNDS as worth watching. Yet there is no way to discuss this movie’s depth without revealing its premise. So for those who like their movies mysterioso, stop reading here.

We discover what troubles Ben through intermittent flashbacks, the type that start as a few seconds and then grow longer as the movie progresses – seven people were killed (including his loving wife) in a gruesome accident that Ben blames on himself. To atone, he has made a life choice – which may be almost as gruesome as the event that triggered it – in an allusion to Shylock’s “pound of flesh” in Shakespeare’s MERCHANT OF VENICE, Ben is compelled to give “seven pounds” for the seven dead.

Gabriele Muccino directs (as he did for Smith in THE PURSUIT OF HAPPYNESS), Grant Nieporte writes (such an original take on lovers who find each other only to lose each other immediately) and Angelo Milli composes (music so inspiring, in aching choral sweeps, evoking doomed love and dissonant portent).

Dan (Barry Pepper) is Ben’s close friend who must carry out the horrible task of ensuring Ben’s wishes are met.

And the climax with the box jellyfish – harboring the deadliest poison on Earth – will leave you stunned. (There is the issue that the jellyfish poison will contaminate Ben’s organs, making them unsuitable for transplant… well, they tried to get around this by making him lie in ice and be “retrieved” almost immediately, so…).

A Jesus analogy, when Ben finds true love awakened in him, and he doubts he can go through with his plan. If he chooses to live, the one he loves will die. Yet he seeks to have the cup taken from him – but discovers that is not an option. And this healthy, virile male (gaze upon that glazed ebony, ladies!) does the unthinkable…

Not only do Ben’s “gifts” make us wince physically (a lung to his brother, part of his kidney to a lady, marrow to a young boy, etc.) we are disturbed psychologically too, because Ben’s state of mind is unnatural to the human condition. We cannot self-inflict pain unless it is to our benefit (like a needle to counter sickness – or to get high, I guess), so cannot comprehend the pathologically insane notion of giving body parts to strangers while we are in perfect health.

With such a delicately morbid theme, Will Smith’s compelling acting sells Ben’s state of mind outright; we surmise Ben is edifying himself psychologically in some way – or that he is in too much emotional pain over the seven deaths to care.

In mind and body and heart: Ouch!