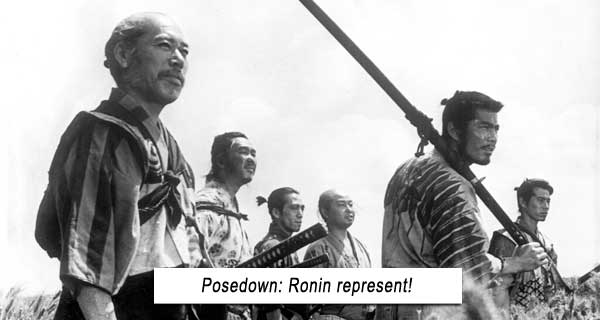 Influencing every superhero movie ever made.

The Jedi of Japan.

Ultimate majesty. Ultimate tragedy. How does one describe the greatest Akira Kurosawa film, one of the most touching, savage and layered stories about sacrifice, courage and redemption, released in 1954 and still standing as one of the greatest films of all time?

SEVEN SAMURAI. (Well, that was easier than I thought!)

In 16th Century Japan, seven ronin (freelance Samurai, unattached to any royal house or clan) are recruited to defend a peasant village terrorized by bandits for their annual crop.

It is a strange thing viewing SEVEN SAMURAI through the lens of modernity, after being indoctrinated with Hollywood screenwriting rules, modern moviemaking techniques and, not least, John Sturges’s brilliant 1960 Western remake THE MAGNIFICENT SEVEN (western in genre, western in hemisphere). Though I’ve viewed SAMURAI innumerable times as an adult, I, like the rest of you round-eyes, was exposed to MAGNIFICENT SEVEN first, since childhood, so we are prone to compare the characters in SAMURAI to their analogs in MAGNIFICENT, rather than the other way round…

Takashi Shimura (who had released another film that year which also attained immortality – the original and best GOJIRA) is wise samurai leader Kambei, clearly the Yul of this magnificent seven. His McQueen here is a mashup of two warriors, Daisuke Kato as Shichiroji (a former right hand man) and Yoshio Inabe as Gorobei (recruited for his display of tactics); there is the Coburn knife-thrower (Seiji Miyaguchi as Kyuzo), and the down-on-his-luck Bronson chopping wood (Minoru Chiaki as Heihachi). The Horst novice who yearns to be on the team and is denied until his persistence wins out, is a mashup of young Katsushiro (Isao Kimura) and a veteran drifter named Kikuchiyo (the breathtaking Toshiro Mifune). 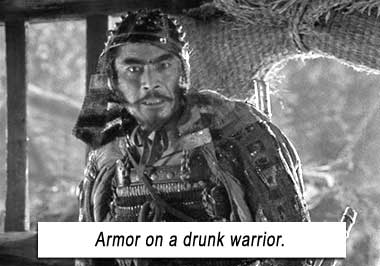 Toshiro Mifune. His name is synonymous with the Way of the Samurai. This film would not be his first in wielding a katana, but it would rocket him to such fame as a cinema swordsman that it would become strange to see him grace a movie screen without that trusted samurai weapon. What an incredible, unique energy he brings to the role of Kikuchiyo! If it were not for Mifune, SAMURAI would be just another great film, not the towering work of art that it is. Mifune imbues the film with the imperfect humanity it requires; he is the everyman thrust onto a super-man pedestal; he brings all the left turns and laughs required to punctuate the spiraling tension, and surprises us with many gems of profundity. The other samurai stand tall, their superhuman auras glutting the screen, but as Kurosawa has noted, six sober samurai would have been boring, “they needed a character that was more off-the-wall.”

Truly the Brando of Japan, Mifune’s Kikuchiyo is a raw nerve: boundless joy, volcanic anger, quizzical neck scratches, perturbed expressions, gales of laughter; inserting himself into the troupe as they travel to the troubled village, unwanted at first by the solemn Kambei, his bombastic revelry eventually winning over the six. After seeing Mifune in later majestic roles, his fierce mien that of a hunting hawk, we forget how insanely funny he makes Kikuchiyo – he’s the class clown, the goofball, with his very own comical bassoon theme, keeping the villagers laughing around him – until he needs to be the iron man.

Many films make the claim, “greatest of all time,” but how many can boast Toshiro Mifune’s glistening man-butt? Kikuchiyo infiltrates the bandits’ lair and steals an armor breastplate, and spends the rest of the movie wearing only that torso armor and a slim breechclout (like a sumo wrestler’s), so if the camera isn’t angled to see that thin material going right up his butt crack, he’s basically naked for Shinto.

There’s that one movie in an actor’s repertoire that rocks you backward and makes you wonder how you never discovered him earlier; makes you want to watch everything he’s ever done. That’s SEVEN SAMURAI for me, with Toshiro. For this ferocious performance, we discover Mifune studied lions in the wild to inform Kikuchiyo. (Is that why he spent so much time not wearing pants?)

After Kyuzo returns from a stealth mission, youngest recruit Katsushiro stands before him enamored, eyes aglow with awe and respect for Kyozo’s skill, effusing, “I think you are… very great!” In this hyperbolic world, these subtitles read as less than salutary, but Katsushiro’s manner tells us he is giving Kyuzo the highest of accolades, while unable to contain himself nor properly express how formidably this hero moves him.

That’s me with Toshiro. 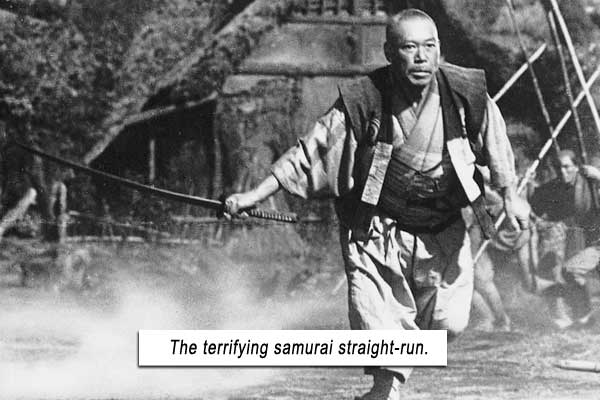 The samurai accept the job of defending the village, for nothing but meals and beds. They teach the villagers self-defense, they build new walls, trenches, traps for the bandits… Why? Why did they do this for nothing? Was it honor? Was it altruism? Was it desperation? The world has turned so far since those long-ago times and since those majestic Men, and we wonder whether writer-director Kurosawa and his co-writers (Shinobu Hashimoto and Hideo Oguni) were trying to capture more nuanced reasons than the simple altruistic avenger story SAMURAI seems on its surface.

Of course they were.

When Kikuchiyo discovers samurai armor hidden by the villagers, it sets off a cataclysm of doubt and betrayal and duplicity – we discover that in that 16th century dark age, ronin were not as respected as history makes them out to be; Kikuchiyo rages how the farmers pretended innocence, yet had encountered samurai before – and had obviously killed many and kept their blades and armor! What makes Kikuchiyo even madder is that the samurai were responsible for the wars that destroyed the farmers’ livelihoods – and he froths at the mouth that the samurai deserved to be murdered (viewers say “Whaaa–?”). Wise Kambei recognizes immediately, “You were a farmer’s son…”

Kikuchiyo loathed his farmer’s life so thoroughly that he carried around a scroll that supposedly proved he was of a royal bloodline. Of course, the other samurai can see through this ruse – but soon Kikuchiyo proves that his blood doesn’t have to be royal to be noble: he screams how he hates the villagers (“Damn these fools!”), screams as a family and their child stays behind in their home outside the protective boundary – and then rushes headlong without hesitation into their burning home to save them when the bandits attack. 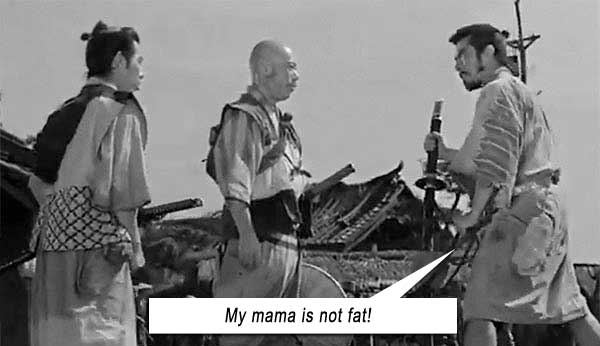 Filmed in black and white, SAMURAI is a technical masterpiece (Kurosawa pioneered filmic techniques, multi-camera shooting, efficient editing), an artistic milestone (the tragic hero’s journey encapsulated in a battle for a village), a runaway financial success (Japan’s highest-grossing movie), and a cultural juggernaut (its impact in films is felt to this day, as innumerable storytelling tropes were popularized with this film and copycatted through the decades, the most popular trope being the assemblage of a team of experts; if LETHAL WEAPON and DIE HARD influenced 80’s action movie trends, SAMURAI influenced ALL action movie trends; even someone as culturally influential as George Lucas has cited the movie as part-inspiration for STAR WARS – now you see where he got the idea for his ascetic swordsmen).

Accept no substitutes: view the full 203-minute version with Japanese dialogue and subtitles. As always, dubbed versions are not just laughable but idiotic, and make all of us Movie Maniacs who tout this movie’s brilliance seem like buttheads for recommending it.

If there is anything to criticize in SAMURAI, it might be the lack of character development for the villain. Whereas the samurai are painted as thoughtful, tactical, virtuous, humble, with a desire for balance, there’s only the barest motivation for the villain, a faceless leader who only appears twice with a few basic action lines. He’s a cardboard cutout. John Sturges would rectify this shortcoming in MAGNIFICENT SEVEN when Calvera (a saucy Eli Wallach – an actual star, adding heft to the role, therefore making the heroes look better) rationalizes why he must steal – to feed 40 men, horses, ammunition, winter… 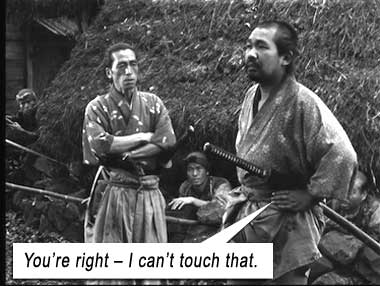 The bandits here are faceless attackers; the study is on the farmers and samurai who beat them back. Until the bandits use their new-fangled weapon of mass destruction – a gun.

The battle scenes in SAMURAI are to die for – probably literally, as the villagers and bandits clash in frenetic, seemingly un-choreographed havoc. I love the way the samurai run into battle: that straight, flat run, where they don’t bounce up and down or flap their arms, but come at you in a sturdy straight line like an arrow, while one hand rests on their sheathed katana, or – worst nightmare – wielding their unsheathed katana! That dead run looks so cool, so terrifying in its willfulness and fatal utility.

Kurosawa lamented he was forced to film in rain, but it lends a thrall of doom to the already breath-hammering action. In those days of practical effects, with all those people running around with katanas, bamboo spears and pitchforks, even though they were props, how many people actually got injured with all those long, pointy objects flailing about?

Young Katsushiro would discover the farmers were hiding away their women and children for fear of the samurai. His redemption would come in the form of female: Shino (Keiko Tsushima), a farmer’s daughter. He may have joined the samurai looking for glamour and excitement, but he would find his destiny lay along another lay—I mean, path.

For many of the samurai, their redemption IS to give their life, in the struggle to make the world a place that would not require their killing expertise. 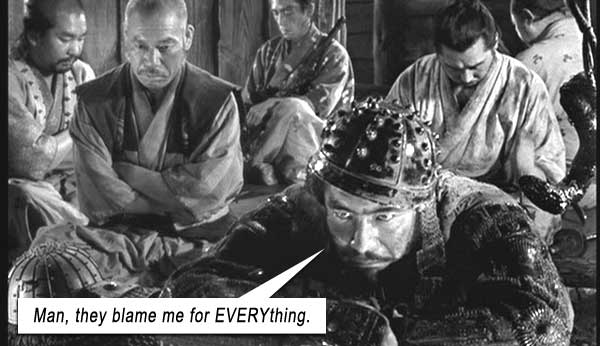 This is why tears will flow for SEVEN SAMURAI. Not because it’s one of the very first avenger films (long before men wore iron suits and threw vibranium shields) but because SAMURAI exemplifies the axiom, “Live by the sword, die by the sword,” and layers that truism with wrenching humanity.

Katsushiro, in renouncing the sword for sex, does not meet his end, for he is now a creator of life, not a taker of it. The older warriors, these mercenaries, were no doubt asked to perform deeds throughout their lives they were never proud of. Yet they lived day to day, piling regret upon regret in their violent lives. When Kambei tells his lieutenant Shichiroji, “In the end we lost this battle too. The victory belongs to the farmers, not to us,” he knows that even after this win, he is still cursed to wander the Earth, rootless, loveless, a hired killer. In a sense, it is a lament that he too did not die a noble death alongside his compatriots, defending something purer than his own stained soul.

A long time ago, in a galaxy far, far away, the circle is now complete.