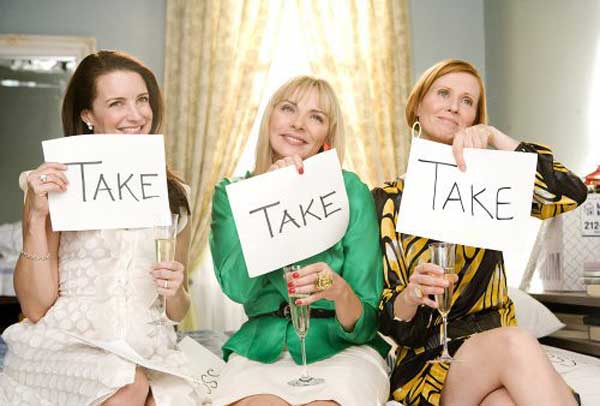 Four ugly women bitch and moan about men. The End.

Nauseating and irrelevant to men and people with more than half a functioning brain, SEX AND THE CITY THE MOVIE is a temple to the spoiled-hideous First World upper class fem-empowered sub culture. Since its inception as a TV series in 1998 (created by Darren Star) SEX AND THE CITY has become the role model for entitled harridans the world over. Only reason this institution has nominal cred with me at all is because Prince used it in his song Kiss, in live performances updating the line, “You don’t have to watch Dynasty to have an attitude…” to “You don’t have to watch Sex & The City…”

Fans of the television series need not be worried – the hauteur and bitching levels are still higher than the Chrysler Building, as we follow the tiresome, elitist girl-adventures of four New York City dregs so ugly on the inside that they must garb themselves on the outside with the latest “label” couture hoping no one will notice their psychological deformities. It doesn’t work.

Carrie’s male companion Mr. Big (resolute Chris Noth) buys them an apartment to co-habit, but Carrie, on the prompting of her gold-digging friends, won’t let Big have his name solely as owner – so badgers for marriage. I know: world-shaking plot events, right? Big reneges on the wedding – on the wedding day. Funniest part of the movie. Don’t know why Carrie takes it like the sinking of the Titanic.

Meanwhile Miranda’s boyfriend Steve (David Eigenberg) confesses to an affair. And in this chick-centric universe, the fact that Miranda has not given Steve sex for six months doesn’t enter the equation at all, and she acts surprised, hurt and outraged. And all her pompous, self-righteous tart friends exclaim, “I can’t believe it!” Six months. No sex. I think it’s safe to say every single man in the audience that was dragged pussy-whipped and screaming to this movie was in Steve’s corner on that one.

Meanwhile, playgirl Samantha is bored of her upscale male model boyfriend as her twat itches for the Euro playboy neighbor.

And though Charlotte is happily married, she can’t get pregnant. Boo hoo!

There’s even the token empowered fat black chick to open out more demographic: Jennifer Hudson with her butt the size of a small rhino. 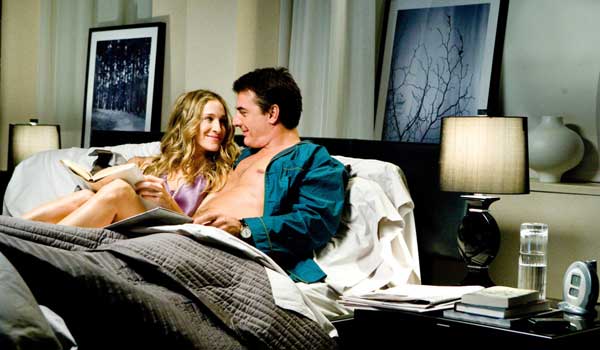 Mmm, every woman’s fantasy: warm home, big man, expensive art, cozy bed, rich tapestries, good book, deep love… until they get it. Then they want something ELSE… or, uh, maybe not. Or maybe yes? Or maybe maybe? Who knows? Who gives a fuck?

Production value is excellent – after all, written and directed by a gay guy, Michael Patrick King – but no matter how much makeup these trollops slather over those wrinkled mugs, they look old and tired and worn out. They are. Like the show.

You don’t have to be a dumb chick or a homosexual man to enjoy SEX AND THE CITY. But it helps.

What kills me about fat chicks is: “Oh, I’m hot, I’m sassy, I’m woikin’ it!” yet as soon as they get a lap band or stomach staples or manage to stop stuffing their faces and go from a size 16 to a size 6, they’re on the cover of People magazine crowing about how hot they are NOW. 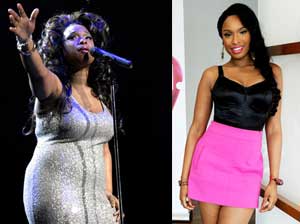 You’re right. I much prefer the hippo look to the healthy, height-weight proportionate human look.

Sho’ nuff, Jennifer Hudson herself, post-diet, appears on the cover of People April 2010, with the headline, “From a 16 to a 6,” crowing about how hot she is NOW. So when I call it like it is – fat and unappealing – don’t give me grief over how hot you are at 16 when you are – and always will be – aiming at 6.