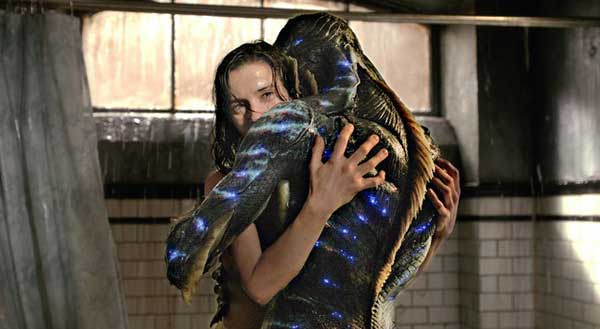 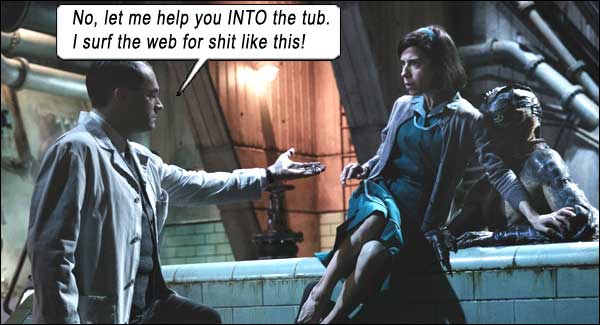 Interspecies Love and the Balls it Requires.

Like the aqua spawn of THE CREATURE FROM THE BLACK LAGOON and Abe Sapien from HELLBOY, our collective consciousness accepts the “Gill Man” as a species; a familiar alien entity in our science fiction. Yet in Guillermo del Toro’s unique THE SHAPE OF WATER, the Gill Man has transcended the species demarcation and is now more “man” than “gill.”

See how far we’ve come: In BLACK LAGOON, women screamed, overacted and swooned into the arms of the Gill Man, for the poster shot of Creature Carrying Woman, and it was assumed the Creature would Weinstein the human woman if she was not saved by the rugged hero. Then Abe Sapien in del Toro’s own HELLBOY II had a “thing” for an underworld chick; this time, at least, the Gill Man was allowed some unrequited love with a woman who did not fear, or was repulsed by, him. Now, in THE SHAPE OF WATER, the Gill Man has a consensual sexual relationship with a human woman – and everyone’s okay with that! See how far we’ve cum?

During the race-riot 1960s, in “a small city near the coast,” an “asset” is “dragged out of the river muck in South America” and brought to an aerospace plant for containment and study. A cleaning lady discovers the asset is an aquatic anthropoid creature, a Gill Man, and forms a bond with him. When she learns of the Gill Man’s fate – dissection by the military – she rescues him to set him free, thereby setting herself free in the process.

You know what I like about THE SHAPE OF WATER? Not just that it’s crammed with visual texture, or that it draws from so much of our cultural consciousness, or that every shot is an art explosion, and each character breathes with painful human clarity, but that it is purely original. Not a sequel or a prequel, not from a novel, not a true story, not a superhero film, not a reboot or a remake, not a stodgy drama about kids reconciling with their parents during adulthood – writer-director del Toro (PAN’S LABYRINTH) and co-writer Vanessa Taylor (DIVERGENT) have forged this mythic tale from whole cloth. 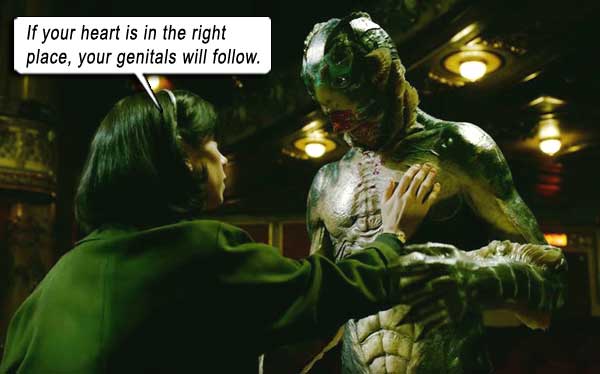 Elisa lives with middle-aged Giles (Richard Jenkins), a closeted gay ad painter trying to reclaim his artistic job, during the advent of commercial photography; a pathetic lonely soul himself, Giles (ha! Didja notice his name? Like “gills”) has a few pleasant sign-language words with Elisa as their paths cross every evening, when Elisa sets out for her midnight shift at the aerospace plant. Octavia Spencer is Elisa’s cleaning friend and accomplice, Zelda.

Strickland (Michael Shannon) is the government agent who ostentatiously hauls in a water tank to a classified room one night: “The most sensitive asset ever to be housed in this facility.” We suspect Strickland is a loon with his belligerent attitude toward what’s in the tank, and with each scene, he reveals himself to be more unhinged: washing his hands before he pees with arms akimbo on hips, because “it reveals a character flaw if a man washes afterwards”; misogynistic, racist, sadistic, with an extreme devotion to Nick Searcy’s unforgiving, hard-nosed general…

Michael Stuhlbarg is Hoffstetler, the lead scientist who studies the creature in the tank; at first, he seems to be on the side of Strickland – until we discover he isn’t even on the side of America! He’s a Russian spy in the aerospace plant (of COURSE he is; Russia has had moles in the American government from way back then, all the way to Dumbo Donald in 2016), who tells his superiors that Russia can learn from this creature because it is intelligent. But Russia just wants to kill the creature, to prevent the Americans from learning anything from it – and the Americans want to “learn from it” by killing it and studying it. (Seems the only thing stunted minds have in common is killing.) Stuhlbarg has always played cool, sympathetic roles, and his Hoffstetler is no exception, as he risks his life to help Elisa save the Gill Man. “I don’t want an intricate beautiful thing destroyed!”

That knowing smile when a Gill Man’s tackle perfectly fits your bait.

When Strickland stumbles bleeding out of the asset room one day, with two of his fingers sliced off, Elisa runs in to discover – the Gill Man (Doug Jones in an amphibian suit). Entranced, she empathizes with the Gill Man’s loneliness and fear of his alien environment. Now we realize why this tale had to be set in the ‘60s, because Elisa makes numerous unauthorized visits to the Gill Man simply by swiping her security card; with modern tech security, she would be found out immediately. Her fondness for the Gill Man grows, as she brings him boiled eggs and Glenn Miller and Benny Goodman albums on a Gramophone, and he learns her sign language, which means they are doing what all intelligent creatures do – communicating.

Yes, but when does it get to the fornicating?

For THE SHAPE OF WATER to succeed, it needed to transcend all those simplistic BEAUTY AND THE BEAST tropes of platonic “love,” and classically beautiful women falling for ruggedly handsome beasts (Sally Hawkins is a very non-conventional yet alluring beauty!), and the most insidious trope of the “beast” protagonist changing into human form so that “physical love” won’t freak anyone out, which completely negates the message of “loving the alien” if you’re going to make the alien look like YOU. So SHAPE astounds us with its bravery of moving into the intercourse arena with gills wide open.

Elisa, on the bus, traces falling rainwater across the pane – the droplets looking for all the world like sperm chasing an ovum, multiplying. A metaphor, or my jovial imagination?

Movie opens with Richard Jenkins narrating about a “princess, a tale of love and loss, and the monster who tried to destroy it all.” Of course, the “monster” is not who we think it is at all. In a tale this un-ordinary, it takes a master storyteller to weave the threads of happenstance in such a way that we accept the actions of his damaged characters. From Elisa, the lonely mute, orphaned as a baby with scars on her throat, (emulating… gills?), who finds such understanding in an alien creature that she is aroused to coitus with it (without even knowing if it possessed the requisite hardware!); Zelda, whose moribund marriage allows her to empathize with anything yearning for freedom; Zelda’s husband, so “small” that he doesn’t even think to stand up for his wife against Strickland in his own home; Strickland, so unhappy with his wife talking during clinical sex that he comes onto Elisa simply for the sake of her silence; Giles, who must go through a rejection fire of his own to understand the loneliness of Eliza.

“Life is but the shipwreck of our plans.”

Just as Andy Serkis has become the King of Mo-Cap, Doug Jones is undoubtedly the King of the Fantasy Creature Suit. He imbues his Gill Man with such rapturous emotion, such poignant connectivity, it elevates what was once the visage of a monstrous deviant (in BLACK LAGOON) to that of the rugged six-packed leading man. 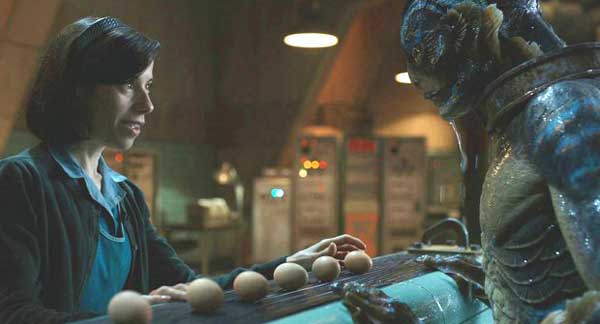 Elisa tries to tell the Gill Man how many eggs she has left, so…

I was disappointed that Giles had to be shown suffering rejection by the ad agency and the homophobic diner chef, before he would help Elisa. Only then did he realize what it was like to have no one. Earlier, he balked at helping the Gill Man because, “He’s not even human.” Elisa signs at him: “If we do nothing, neither are we!” If Giles had offered to help before he suffered humiliation, before he felt that his life held no more hope, then his help would hold more worth, no? As it is, it’s a man teetering on the edge of insanity with nothing to lose. Why wouldn’t he help two ladies and a Russian steal a Gill Man?

Strickland told of the South American tribes worshipping the Gill Man “as a god,” and later lectures Zelda how it can’t be a god, because “the Lord created humans in His image – even you. Well, maybe more like me than you.” Then the ending is gonna surprise the hell outa that racist…

Knowing that del Toro was affected by BLACK LAGOON as a child (thinking it was a love story about the Creature and a lady which would end happily), we consciously feel his rewrite in the final scenes of SHAPE. Like Tarantino rewriting Hitler’s demise in his own brutal manner, del Toro recreates that earlier movie’s actions only to have them soar in other directions. Del Toro’s Gill Man carries unconscious Elisa into the water. It’s the same Creature Carrying Woman pose that adorned thousands of ‘60s movie posters, but this time – the woman is going willingly; this time, the man who looks on is not doing so in horror, but serenity, knowing the woman has found her place. And he’s gay. (There are even theories that baby Eliza was abandoned near the water with throat scars because she was OF the water to begin with, and has found her way back, the Gill Man not transforming her scars into gills, but merely opening up her actual nascent gills.)