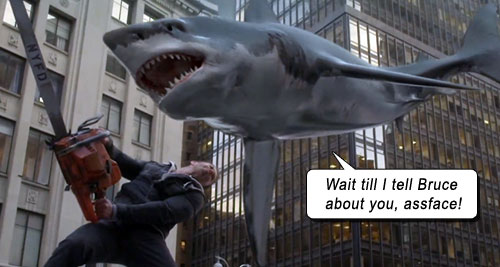 Just when you thought it was safe to get blown…

Yeah, it sucks – but it was meant to suck.
— Jon Stewart, THE DAILY SHOW.

SHARKNADO 2: THE SECOND ONE is one of the stupidest movies you will ever see. Yet from a moviemaking, storytelling point of view, it is actually better than its original. My God! Does this mean it joins the ranks of THE GODFATHER, THE TERMINATOR and MAD MAX?

Before we take one more bite out of this insult to the human brainstem, let’s talk about that title. Just wanted to point out that the same untalented douche that wrote the first one, Thunder Levin, actually titled his sequel “The Second One.” No really, he actually typed that in English on the title page of his screenplay. And then some bigger douche, Anthony C. Ferrante, directed it and had the ‘nads to call it a movie.

Ian Ziering returns as Fin Whatsisname and Tara Reid returns as Talentless Blonde (who never gets her knockers out, so I’m wondering how she ever retained her role). And who do we bitchslap for Mark McGrath’s and Kari Wuhrer’s characters being named Martin and Ellen Brody? (JAWS, 1975). Vivica A. Fox has let herself go, and Judd Hirsch (from TAXI, 1978) is a taxi driver. A slew of cameos, from people who were fooled into thinking it would be “cool” to be a part of this cult vomit (Robert Klein, Andy Dick, Perez Hilton, Robert Hays (from AIRPLANE!), Billy Ray Cyrus, Kelly Osbourne, even Jared from Subway!, with reporter Matt Lauer making an assface of himself with Al Roker).

SHARKNADO 2 actually possesses a meager storyline that we care nothing about, but at least it proves that Thunder douchebag was minimally using the thinking part of his mind. Again, there are zero production values, the effects are anything but “special” – they didn’t even bother to change the poster, simply Photoshopping the first SHARKNADO poster with the Statue of Liberty.

Fin and Sugar Ray try to keep their families safe by battling sharks on the subway, in the streets, and on the tops of buildings, with chainsaws, bats and execrable direction. Eventually New Yorkers get in on the act, machine-gunning and slicing flying sharks because – they’re just so tough and cynical, yeeah booouuy! The apex of two superstorms meets at – where else? – the Empire State Building, and Fin is there to chainsaw sharks with his dynamic posing and red-headed shouting.

If you want to tweet about how much you love SHARKNADO, go right ahead, but I suggest you stop voting and driving, because it’s obvious you can’t be trusted to comprehend policy issues or stop at red lights.