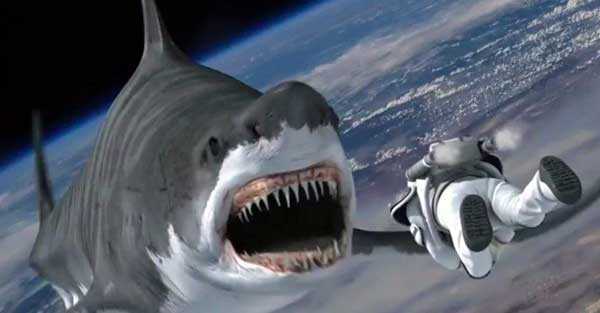 When David Hasselhoff is the best actor in your movie, you’ve got a real fucken problem.

Clearly preempting a suitable title for any review, SHARKNADO 3: OH HELL NO! takes all that is good about movie-making and science and acting, and shit-squirts it up against the wall like dysentery.

Director Anthony C. Ferrante and writer Thunder Levin got drunk one night and came up with this story: Sharks rain down on the White House, the president, the Eastern Seaboard, and appear in low Earth orbit – and Fin OveractorMan (Ian Ziering) is there to stop them with his ginger chainsaw stylings. And David Hasselhoff.

Having paid as little attention as possible to SHARKNADO 2 (for fear of losing more brain cells than on any drunken binge), I cannot tell you whether SHARKNADO 3 is picking up the story from that last dung-fest, or whether they’ve made up the tale from whole cloth. Because the two main characters from that steaming sloth urine are now married (Fin and April), and movie opens with Fin racing to get a Medal of Honor from the President (Mark Cuban), while April (Tara Reid) is heavily pregnant. Here’s the saddest part: I don’t think it makes any difference to the filmmakers; they could have completely written this story from scratch without any nod to the previous two movies, or it could be tightly interwoven with the other two entries – and it would still be this bad. There is NO bar too low. They Just — Don’t — Care.

Look, we all know it’s not serious moviemaking, and supposedly “so bad it’s good.” But everyone is missing the point. The SHARKNADO series is a perfect example of why an incurious, lying, empty-headed, know-nothing like Donald Trump could become a presidential nominee in the United States in 2016. Because Americans accept a bar this low for movie-making now. And Trump’s candidacy is synergy for the course.

But this is why – like Trump’s campaign – SHARKNADO is entirely unacceptable. Because even within this campy, satirical universe where no acting is allowed and all science and logic is as real as unicorn cock, there are unfathomable inconsistencies. Now, the filmmakers, and every D-List actor who shoved their way onto this set for an ignoble cameo, might shame us by saying we’re taking it way too seriously, but it is this very attitude of cheering on incompetence that has brought America to taking Donald Trump way too seriously. Filmmakers, I’m not chiding your execrable direction, lackluster editing, laughable CGI, non-existent continuity and overall ignorance and blithering stupidity – I’m saying your movie doesn’t make sense even within its own universe.

For example: When Fin meets old acquaintance Nova (Cassandra Scerbo, a busty chick who may or may not have been in the previous movies; I’m not paying attention to anything but the swell of her tits against that military vest), he discovers she is fanatical about learning about the biology and causality of the sharknado sharks, in order to destroy them. Instead of kissing her tits in thanks for taking the time to scientifically curb the sharknados which he has to battle against, he chides, “Give it a rest! It’s in the past!” What–?! The writer and director are simply not paying attention to their own characters, their story, or the retarded voices in their heads. 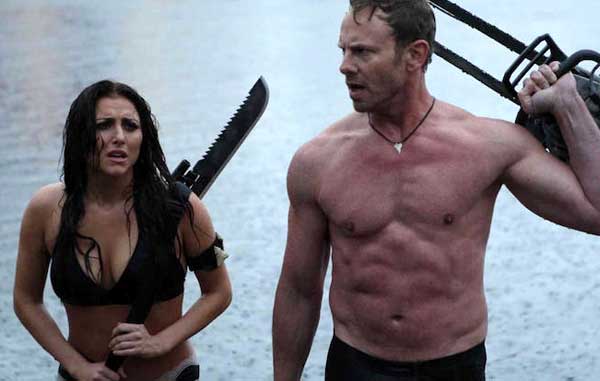 No D-Cups, no career.

An example of stupidity that didn’t even need to be in the script: After Nova has been dismissed by Fin, she continues blabbing. But we’ve already gotten the point that she is a fanatic and that any plot of hers to destroy the sharks will probably work because of her knowledge. Thus, we didn’t need her extra dialogue, “The main diet of these sharks is not fish – it’s birds. That’s why they can live up in the clouds so long.” Now I don’t expect a dunderheaded movie that is aimed at dunderheads to connect the fact that birds have hollow bones, which may be why the sharks are lighter and can be lifted by high winds (which is utter bullshit anyway, but seems like science). They don’t go this route. I’ll guarantee that the imbecile who wrote that line is saying that because sharks eat so many birds, the sharks are BECOMING like birds, able to fly.

If you want a movie “so bad it’s good” try THE HUMAN CENTIPEDE series – completely off the rails, and scientifically, medically and humanly inaccurate, but making sense within its own hole in its head.

The cameos will make you laugh uproariously, so I guess there is some small rectitude in all this rectum: Anthony Weiner is a NASA flight director, Ann Coulter is the VP, Lou Ferrigno is her bodyguard, Bill Engvall is Secretary of State, Frankie Munoz is a douchebag (and pining assistant to Nova), Bo Derek is Tara Reid’s mum (now that her looks have gone, we can focus on her acting ability – and see that she has none); Matt Lauer, Al Roker and the NBC ladies make assfaces of themselves by playing themselves; there’s Jerry Springer, Michele Bachmann, Chris Jericho, Jackie Collins, Robert Klein, and – oh no! – Bobak Ferdowsi (Mars systems engineer) and Penn & Teller! Don’t take my loved ones! Damn you, SHARKNADO!

The Hoff is Fin’s dad, who must somehow pilot a secret space shuttle into orbit to fight the sharks that are flying around up there. Or something. Does anyone care? With Fin and April in spacesuits jumping the shark so many times, a sharknado is raining down on their careers.

When April’s baby is born through the inside of a shark that swallowed her, I realized Tara Reid wasn’t really pregnant, but I couldn’t be sure for the whole movie, because she was so gravid. If she was truly pregnant, it must have been the hellspawn of some producer she had to bang to stay in the D-List and not slide any further into oblivion. But it was just good prosthetic effects, so her slide will continue…

When April is cut out of the shark after she pushes her newborn through, she is wearing a tight, one-piece bikini. Uh, okay, so are we to believe that she birthed the baby inside the shark, then did 3000 sit-ups to get her abs back, then quickly put her panties back on due to modesty, all within the time it takes for her vagina to shrink back to normal size?

From Reality TV to Reality.
Dumbo Donald Trump was considered for the role of American president in SHARKNADO 3, but his lawyer cautioned him against it, because he was running for the real post. Dingbat Hypocrite Sarah Palin was also considered, before the role eventually went to real-life billionaire Mark Cuban (as opposed to fake billionaires like Dumbo Donald). Apparently Dumbo Donald was incensed about the role going to a long-time competitor of his, and made his lawyer, Michael Cohen, scream at the producers. How quaint: imbeciles screaming at imbeciles.