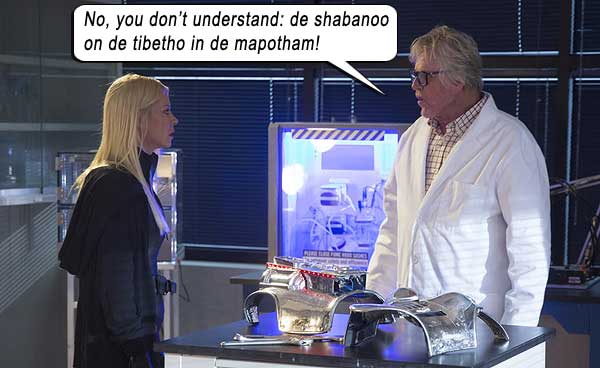 When Gary Busey is the smartest person in your movie, you’ve got a real fucken problem.

Busey is scientist Dr. Loosedentures in SHARKNADO: THE 4TH AWAKENS, the fourth film in a franchise which should be expunged from filmic archives with extreme prejudice for systematically dismantling the intelligence of an American population that is already teetering on the edge of imbecile and fuckhead.

Ian Ziering returns to continue the embarrassment of his D-List career as Fin Shepard, the John McClane of shark attacks, who always seems to be in the wrong place at the shark time – when impossible shark-carrying tornadoes form, and dump them on D-List celebrities whose career has jumped the shark.

It’s five years since the events in SHARKNADO 3. A scientist named Astro-X (Tommy Davidson) has discovered a way to stop sharknados, through the use of dumb blondes at consoles, so Fin has been out of the news. Fin’s wife April (Tara Reid) is dead – killed by a shark falling on her in the last film; Fin’s son (Cody Linley) is returning from the army (really? He has a military-aged son? Who’s following this continuity? No one. Fin is ginger but his son looks like Ivan Lendl); Fin’s daughter (Ryan Newman) is working on some military project with Fin’s dad The Hoff (who is back from the Moon via the magic of Astro-X), and Fin’s youngest son Gil saves the day by chainsawing Fin out of a blue whale.

Don’t even ask. I just want to beat this movie until it turns into a documentary.

Gary Busey (who can’t quite enunciate his scientific precepts through his loose dentures) is April’s dad, who secretly saved her from death in SHARKNADO 3, and made her bionic. With a chainsaw and lightsaber built into her left hand (will someone please sue the pants off these people?), the ability to shoot lasers like Iron Man, super strength, and the power to fly (yeah, you’re reading all this correctly), April’s storyline goes beyond Jumping The Shark – she’s Jumping The Shark-NADO. Now if only they could install some acting ability…

This time it’s Vegas. The same assfaces who wrote and directed the previous three movies return to take a dump on the human race – writer Thunder Levin and director Anthony C. Ferrante. A tornado picks up all the sharks in Astro’s display tank, ironically making Astro responsible for the sharknado. And Fin is there to whatever. When Vegas is flooded by a tsunami, Fin commandeers the pirate ship from the Treasure Island hotel to sail it to safety. Because it’s totally seaworthy, and easy to sail with a crew of three civilians. Yeah, just turn this big spoked steering wheel like they do in the Johnny Depp movies. Eventually, with Busey’s science bullshit-amajig, Fin must raise all the water in Niagara Falls to cancel out the sharknado. While April flies around and rescues people. Yeh, science. 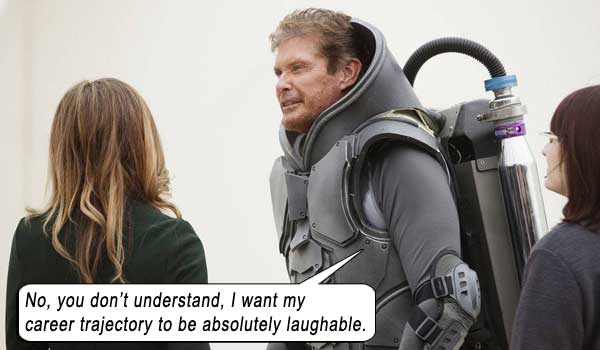 To illustrate the lowbrow nature of this production: while it is being televised on the SyFy channel, there is a twitter feed display in the lower third of the screen – @sharknado4 – where numbnuts in trailer homes can misspell plaudits to their hearts’ content and have their non-grammar screened on national TV. To cater to these knuckle-draggers, every time a tornado picks up an article other than dust, it is fearfully called a “boulder-nado” “glass-nado” “fire-nado” “cow-nado” “lightning-nado”… In the final scenes, these tornadoes that can pick up 800-pound sharks but usually leave 180-pound humans alone, at last suck humans into their maw. Look ma, a ‘tard-nado!

Admittedly, Ian Ziering (who is also executive producer!) does the most magnificent acting of his career, when he discovers April alive. “I had to pull the plug, and you died in my arms,” which brings him in line with some of the greats – Barney the Dinosaur, Al Roker, William Shatner. With this 4th dogshit installment of the series, we have to believe that Tara Reid must at last have enough cash to fix her terrible boob job.

Once again, movie makes no sense even in its own universe:

American humor has sunk so low that audiences do not understand the difference between satire and incompetence anymore. Satire is when you spoof something well. Incompetence is when you have not got the wherewithal to do so.

If you are sincerely trying to make a satire and your resources/budget only allow you a certain level of quality, you can be forgiven for the end result. And lo! Your creation might just become a cult classic – as did SHARKNADO (Jul 2013). But if your fourth film retains the same gimp tone of your first, well then, now you’re doing it on purpose. Yes, I “get” all the references – from NETWORK, to CHRISTINE, THE WIZARD OF OZ and STAR WARS – I am not “missing” any lame attempts at humor. But here’s the double-edged sword – anyone like me who can discern all your refs, is also canny enough to perceive that your low quality is now forced. These filmmakers are TRYING to make this movie look indie and ignorant, with the over-worn palliation of “so bad it’s good.” Now hold on there! You can’t use that excuse four films in. This is a series which can now accrue a decent budget for a proper production; can afford to have better special effects, hire competent continuity staff, an editor who isn’t drunk and a director who isn’t sniffing taints.

SHARKNADO 3 (Jul 2015) hit the airwaves just after Donald Trump announced his presidential campaign. THE 4TH AWAKENS is released exactly one year later, and Trump is the Republican candidate, through a campaign that cannot stop putting its baby foot in its orange mouth. Reason Trump continues to thrive is because of media like SHARKNADO – incompetence lauded, ignorance on a pedestal.