SHARKNADO 5 finds shark-slayer Fin (Ian Ziering) and his cyborg wife April (Tara Reid), chasing down a sharknado that has swept up their young son Gil (Billy Barratt, as annoying as young Anakin), and is swooshing around the world’s landmarks like a nosey tourist, without any sharks eating him, or him being dumped out and breaking his legs.

The sharknado swirled into action when Nova (Cassandra Scerbo, who still doesn’t get her tits out) finds a cave with an ancient painting that tells of sharknados in caveman times. Then she and Fin steal a shark-fin amulet, in the worst intentional Indiana Jones ripoff in cinematic history, down to finding a skeleton with a fedora and a whip, and placing a weighted bag on the pedestal in place of the amulet. The amulet is supposed to prevent sharknados. But when this one starts a worldwide sharknado, no one stops to ask why. Because – who really gives a fuck by now?

If you really must watch these SHARKNADO shit sandwiches, go right ahead. Nothing I say will stop you. Most viewers even minimally in touch with pop culture know what they’re getting, and watch out of curiosity, clicking past the inept effects shots, staring blankly at the insipid performances, and shaking their heads at the utter lack of directorial cohesion and editing skill. SHARKNADO 5: GLOBAL SWARMING is no better or worse than its four predecessors, meaning it is a pile of absolute, unmitigated dogshit. 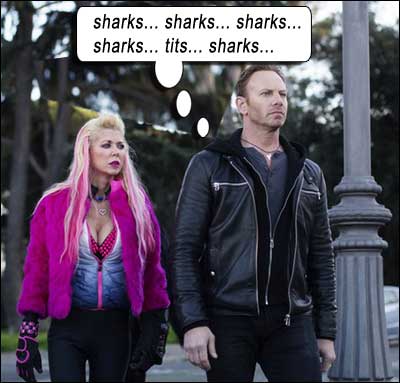 And if you watch because you sincerely consider SHARKNADO a top class movie franchise, then you need to wear a MAGA hat at all times, so people can avoid you.

Why does Chris Kattan look as old and weather-beaten as Larry King? He also looks crippled, as he plays a British Prime Minister with an accent that reminds us that under all that makeup, he’s still Mango.

As with all SHARKNADOs, cameos are abundant and try to squeeze in as many pop culture references and ripoffs as possible: Bret Michaels (since Vince Neil was in the last one, his milkier clone appears here), Gilbert Gottfried, Nichelle Nichols, Clay Aiken, British pinup girl grown ancient, Samantha Fox, Fabio as the Pope, Geraldo Rivera as a scientist and Olivia Newton-John as a doctor with a bionic clinic under the Sydney Opera House (which is really a battle station). Appearing alongside pop icon and natural beauty Olivia is a Botox experiment gone horribly wrong, with giant tits gone horribly right, that calls herself Olivia’s real-life daughter, Chloe Lattanzi, who is so ugly on the outside through cosmetic surgery, we have a pretty good idea how ugly she is on the inside as well.

Olivia and her Frankenstein’s Experiment of a daughter work on injured April’s cyborg body, removing her ability to fly (they had to find a way to get rid of that superpower, because it made solving sharknados too easy), and implanting her with a fantastic DD rack that almost takes attention off her lack of acting talent.

One would think these filmmakers had a handle on the shark special effects by now. Nope.

Why are the opening titles at the end of the first act – 21 minutes in? They seem like closing titles – but we can’t be that lucky. And did the last animated title just rip off Monty Python by having a big foot crush it? Of course it did.

The slogan, “Make America Bait Again,” has nothing to do with the concept outlined in the sidebar; it’s simply because this movie is released into a world where Dumbo Donald is president. Or maybe it does have something to do with keeping the hackers happy… 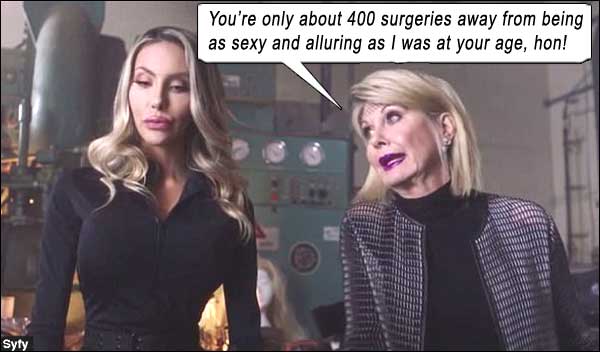 At one point, Fin tells Nova, “It’s never been about the sharknados – you’ve just wanted to kill every shark in the ocean because one killed your grandfather! These tornadoes are just getting in the way of the revenge you’ve always wanted!” Ooooh – motivation backstory! So now what? Uh, nothing. Nova has instigated a Sharknado Sisterhood, but none of them get their knockers out so – who cares?

Pope Fabio bequeaths Fin a weapon that is part-chainsaw, part-laser, part-dildo. But no matter how hard he tries to rescue Gil, Fin’s attempts amount to naught, as Gil is lost in the fracas, and April is dismembered very gruesomely, although the tears Fin is shedding for his lost family are more fake than Frankenstein Experiment’s tits.

Fin wanders the Earth like Jules from PULP FICTION until Dolph Lundgren appears as Gil-from-the-future, makes a few Doc Brown jokes about his Hummer being a time machine (complete with Flux Capacitor) and a “To Be Continued” title appears, ripping off the color scheme of the titles from BACK TO THE FUTURE.

Ziering and Reid are now co-producers, so we see where this ‘Nado shit is heading: to Infinity and Beyond.

I’ll see your Shit-Nado and I’ll raise you a Diarrhea-Spray-Nado.

In SHARKNADO 3 and SHARKNADO 4, I allude to Dumbo Donald’s America and the redneck synergy that spawned those movies. However, there seems to be a more horrifying link between SHARKNADO and the Dumbo Donald presidency. Consider:

KNOWING WHAT WE KNOW about Russian trolls overloading facebook with an avalanche of Dumbo Donald media, in order to, if not elect the dumb fuck, then at least besmirch Hillary Clinton’s character, does it not sound familiar when we think back to how SHARKNADO was launched on America’s populace? Not through regular advertising channels (although that played a small part) – but through an avalanche of social media commentary on twitter. The social media avalanche was so voluminous it made the evening news! That’s how *I* heard of that novelty movie and – even knowing it was dogshit – had to watch it to see what all the fuss was about!

Audiences at the time (including the news programs that reported the media-nado) took it for granted the social media reaction was authentic… But was it? Now that we know how insidious Russian meddling is (with the ongoing facebook presence Russia has entrenched in America’s consciousness, and the Russian hacking of the 2016 presidential election), could the SHARKNADO phenomenon have been orchestrated by a coven of hackers just as talented as the Kremlin’s moles? No, komrades, I’m not saying Russia forced SHARKNADO on us – I’m saying that a marketing firm with a rogue’s grasp for cyber-attacks might have been employed to perform this new method of “advertising.”