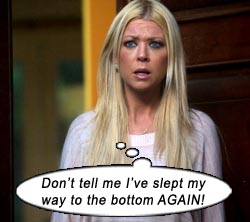 The human race is not worth saving. I’m sure of that now. Not just because SHARKNADO was made in the first place – a non-budget TV movie on the SyFy Channel about sharks being swept up in a tornado and raining down on Los Angeles – but that it somehow spiked in Tweets one night and cable news programs saw fit to promote its effluence by spending more time talking about the tweets than actual news. They were not even promoting the movie, which was taken for granted as being a stinker, but commenting on the social media storm surrounding it. My question is: Why? Why comment about social media on the NEWS? That’s what social media is for – to comment about unintelligent, pointless swill that isn’t important enough to make the news.

Thus promulgating the idea that SHARKNADO is somehow different from all the other yak dung the SyFy channel throws at its dimwitted demographic – to whit: ARACHNOQUAKE, PIRANHACONDA, MEGA PYTHON VERSUS GATOROID, et al. The titles say it all, don’t they? And “dimwitted demographic” should explain why Twitter went haywire in the first place…

The Flat Tire Look in action!

Recall the wisdom of the reviewer who wrote the two-word summation of Spinal Tap’s album, Shark Sandwich: “Shit sandwich.”

And no, SHARKNADO is not in the “so bad it’s good” category. That’s reserved for cult flotsam like MANOS: THE HANDS OF FATE or James Bond movies. The filmmakers of SHARKNADO aren’t even trying. Allow me to quote Gregory Hines and a drug officer from RUNNING SCARED:

Just give me five minutes in a dark room with the filmmakers, and a shoe to beat them with. And humanity can forget about this shit and continue trying to find that cure for cancer…