A Grotesquerie – and not because of the freaks.

MYSTERY SCIENCE THEATER 3000 fans will regard SHE FREAK as “the one that got away.” The MST 3K boys always regretted not being able to rib some stinkers that they just could not acquire the rights to. And SHE FREAK seems a likely prospect that could have been at the top of that pile. 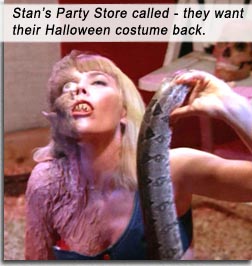 The only interesting aspect of this garbage dump of a film, that gives it any excuse for existence, is that it is an attempt to remake Tod Browning’s disturbing 1932 paean, FREAKS. The same storyline: of a young gold-digger who seduces the owner of a freak show for his money, yet is repulsed by the freaks that he lavishes love upon; of how he dies and how she takes over his fortune and his freaks – and mistreats them until they turn on her.

Browning used real circus freaks in his controversial movie; the underlying message was that the people most “abnormal” were the supposedly “normal” people. In director Byron Mabe’s SHE FREAK, he uses no disfigured or limbless actors, no sideshow curiosities – just one midget (Felix Silla) and a montage showing a sword-swallower and an old lady who handles snakes, and I think the underlying message is that chicks with big tits can’t act.

SHE FREAK opens inside a carnival freak tent, where a woman screams in a manner that can only be described as indifferent. Then the whole movie is a flashback on what that woman saw…

Claire Brennen is big-chested blonde Jade, who leaves her dead-end job as a waitress to join a traveling carnival as a, uh, waitress. There she befriends the blonde stripper with the biggest tits (Lynn Courtney), called Moon, on accounta what she does to her audience every night — waitaminute! — since when do they have strippers at carnivals?! Moon tells Jade of the rich bachelor who runs the freak show, Steve St. John (Bill McKinney). And Jade sets her gold-digging sights on him. While satiating her blonde lust on one of the rugged crewhands, Blackie (Lee Raymond).

Director Mabe excites us with a five-minute montage of the carnival setting up: tents, crewhands, stakes in the ground, rides being constructed, men lifting girders. Riveting cinema. In fact, he has so much B-roll footage in the can, we see a montage of the carnival being struck as well. Another five minutes of your life well spent.

Jade is told, “Take an hour break,” and Mabe indicates this passage of time by showing Jade walking around the carnival – in a montage that lasts an hour. Then she visits the freak show and indicates her revulsion and fear by looking kind of concerned and half-running to Moon and trying to weep inconsolably.

Poor Bill McKinney, renowned character actor (“Squeal like a pig!” in DELIVERANCE) and Clint Eastwood Regular, somehow finds himself in this fart bubble, lending it a modicum of respectability, yet trapped in the editing and directing hell-mare and unable to raise the level of the production one iota.

As Steve, the eligible bachelor wallowing in cash, he woos Jade, through the cunning use of montage (walking hand in hand, ice cream, laughing on the park bench), and marries her in the next montage. Jade puts up with his freaks while wallowing in aforementioned cash. When Shorty (Silla) appears to talk to Steve, Jade is so repulsed we see her break the pencil she was pretending to write with.

That isn’t the only time the director gets creative. He goes for THE GRADUATE shot when Jade opens the door to her lover Blackie. We see Jade framed from below between Blackie’s open leathered legs, but no one – not even the most arrogant stud in the world – would stand with their legs that far apart unless they were trying to avoid dogshit.

The fight scene is priceless. Blackie versus Steve. No punches connecting, editing gone haywire, soundtrack annoying and irrelevant. Suddenly Steve has a knife sticking out of his torso with tomato sauce on it.

After the funeral montage, Jade inherits Steve’s wealth, his big car – and his freaks. She runs off Shorty, and the freaks turn on her, surrounding her ominously…

And at last we see what made that woman at the movie’s opening scream so indifferently: cut to Jade in a display pen, now a freak herself. Inexplicably. How did she get that way with the big eye and the pointy ears anyway? She has no mutated genes and I’m pretty sure the freaks don’t have access to gamma radiation. I guess they just surrounded her to freakishness. (Even the original FREAKS had an inexplicable fate for the cruel woman – but in the context of its morbid production, it worked nightmare wonders.)