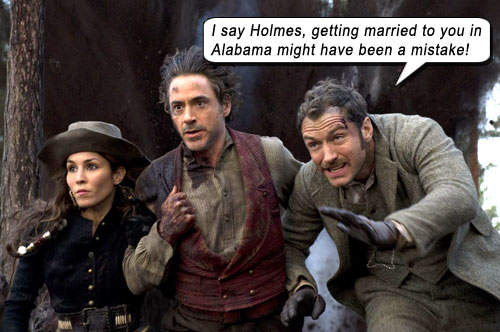 Too mysterious for its own smart.

SHERLOCK HOLMES: A GAME OF SHADOWS is director Guy Ritchie’s brash, bombastic, brainy and body-shaved sequel to his 2009 SHERLOCK HOLMES. Holmes (Robert Downey Jr.) takes on Professor Moriarty (Jared Harris) in a battle as much to do with wits as hits. Along with friend, confidant and eternally disgruntled crimefighting partner Dr. Watson (Jude Law), Holmes must stop an assassination at a peace conference, to avoid the world tipping into chaos (which implies the leaders of the world have anything to do with causing peace, which is exactly their opposite  function – they exist to shatter any existing peace and create interminable conflict for politics and profit – but we’ll let this movie have it’s indoctrinated stance).

The story (written by Michele and Kieran Mulroney) seems hard to follow at first, but we realize that much of it is misdirection and verbosity. We are not regarded as nitwits, so there is much to hear in quick asides and fastidious jokes; SHADOWS is a rich tapestry in a world where every wide-release movie has turned into formulaic mush due to studio constraints and short-attention-span viewers.

Robert Downey Jr. is once again hedonistically body-shaved for the role of Sir Arthur Conan Doyle’s persnickety detective. (Maybe his hair has all been shucked off because suits of iron can be very chafing.) The way the filmmakers set up Jude Law’s contrariness is a wonder: here are two men who we know are the best of bromancers, yet do not have one kind sentence for each other in the first two acts, Watson lamenting with every breath that he would rather be somewhere else.

Poor Rachel McAdams (as Holmes’ love interest Irene Adler) gets it early (don’t know why they tempted us with her luscious beauty if they were just going to rip it away from us). Holmes takes her death with almost nonchalant grief, for there is someone else with cheekbones just as saucy around the corner who will share this adventure with him – the gypsy flame Madame Simza (Noomi Rapace).

Stephen Fry is Holmes’ free-spirited brother Mycroft; stunning Kelly Reilly is Watson’s wife, Mary. And Paul Anderson is that trope we know and love so well – the villain’s right hand man who keeps tracking the hero and never killing him, because. Just because.

Ritchie expands on the devices he used in the last movie; the breakdown of fight sequences before they happen, crash-cutting trails of clues; artfully piecing together daunting sequences that never lose their threads. It’s an amazing piece of filmmaking, with excellent production values that drops us bodily into the world of 1890.

Listen for the theme from TWO MULES FOR SISTER SARA as Holmes tries to keep up with horses while riding a mule. (Like Indiana Jones, horses are his snakes.)

It’s hard to keep up with the plot in A GAME OF SHADOWS, especially with Downey enunciating like a verbose poetry slammer; for the most part, looking and listening carefully is a rewarding experience – but sometimes we just want a shiny suit of armor to blow stuff up with a salty metal quip.