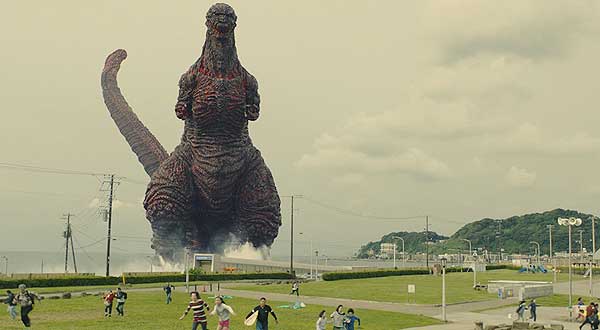 The Godzilla Workout Video: when you’re aiming for that sexy bowling pin shape.

Written like a bullet train, directed like a fighter pilot, SHIN GODZILLA is the most compelling Godzilla film since the original 1954 Ishiro Honda production, GOJIRA!

Considering there have been 32 Godzilla films since that first dambuster (34 if you count the American remakes GODZILLA: KING OF THE MONSTERS and GODZILLA 1985), I realize what a killa zilla compliment this is…

SHIN GODZILLA is an intelligent, reality-based fiction on how Japanese authorities might handle the threat of a giant monster suddenly rampaging through a modern city.

With their dynamic cameras and crisp editing, directors Hideaki Anno and Shinji Higuchi have made this talky production a visually striking thriller. Just as the original was inspired by the uncontrollable forces unleashed by the A-bomb at Hiroshima, SHIN is inspired by the Fukushima Daiichi nuclear disaster, where officials were found to be ultimately responsible for the nuclear meltdowns and release of radioactive material. This Godz is the result of radioactive contamination that could have been avoided.

Like 1954’s original, SHIN starts with a mysterious boating accident. Something on the sea floor near Tokyo Bay is creating undersea volcanic vents. Then a massive “tail” rises from the bay. That’s all it is – a tail – with the intimation of a head on its tip! Intriguing. Scary! Our minds have been so conditioned to these daikaiju movies that we immediately consider this entity Godzilla… or his tail – but it’s not… well, not exactly…

Soon enough, an amazing scene of aquatic dorsal spines pushing forward under a wharf, destroying small boats in their forward thrust. Then another amazing visual: a tunnel under Tokyo Bay springs a roof leak after an explosion; from inside a moving car, we see the roof give way to gushing ocean, as our momentum carries us through it!

The authorities (teams of same-suited men in large clinical rooms) term the tail a Giant Unidentified Life Form. We are taken aback at first at how much screentime the film spends in a government war room, with politicians, lackeys, scientists and aides, all speculating and time-wasting, checking their cellphones, charts, reports, talking, arguing, giving orders and typing on computers, until we realize this is the focus of the movie – not that a “Godzilla” (explained as a code name for the organism) has surfaced and is marching relentlessly toward a nuclear source despite the best efforts of a national army to stop its destructive trek, but how a bureaucracy stultifies immediate action, and how moribund and unmoving any government body can be. In relation to a natural wonder that inexorably moves forward physically and genetically. (Later, when the leader of the task force Rando Yaguchi (Hiroki Hasegawa) and the Japan-U.S. liaison, Kayoko Patterson (Satomi Ishihara) eventually venture outdoors to witness the creature’s trail of destruction, she marvels tragically, “It was ashore only two hours – look at the damage it did!” And Yaguchi counters, “No, we had two hours to do something and did nothing!”)

Many viewers contend this movie might actually be a satire of Japanese (or any!) bureaucracy, but the only moment that comes across is when Yaguchi leans forward and gives three orders, and one of the group of men he is talking to looks around at the others, just as baffled, and asks, “Exactly who are you giving those orders to?” (It’s merely one moment of levity that digs at the old Godzilla films where men are shouting orders at no one in particular, yet stuff gets blown up or copied or moved as required.)

Something disturbing and giant comes ashore, pushing forward painfully on powerful hind legs, massive rounded eyes, vestigial stumps where its forelimbs should be, and great bulbous gills venting gouts of blood! Again, it is not “Godzilla” as we know it, as it shuffles along eerily, crashing through structures effortlessly, seemingly unaware of its motion (as its unseeing eyes are evolved to see in the darkened pressure-crushing deep). These effects shots are sensational; from the low angles and stunning camerawork, we grasp the size and weight of the monster as it interacts with its environment and screaming crowds.

Then it collapses. Biologists are consulted, the creature’s blood examined, news programs report, authorities quibble over what to do…

Relax! It’s armless! [Somebody take away my viewing privileges.]

Apparently, this creature is “evolving” unto itself (a condition that cheapens the already-misunderstood term “evolution” but I’m not here to quibble biology right now); first it was a sea creature, then “evolved” to exist on land; then a “third stage” is birthed – now resembling something along the lines of that creature we know. Throughout these discovery stages – the war room, striking angles, push-ins, found footage, news footage, that keep the mystery and intrigue alive and kicking. The monster heats up and has to dive into the ocean once more; the scientists identify its fins as heat vents and how it needed to cool its metamorphosis. “It’s capable of self-mutation – not generational – and that trumps human intelligence.” (It’s a plot point that was used in a markedly more juvenile manner in GODZILLA VS. THE SMOG MONSTER and GODZILLA VS. DESTOROYAH. The beast can also asexually reproduce, a plot point from the 1998 GODZILLA.) 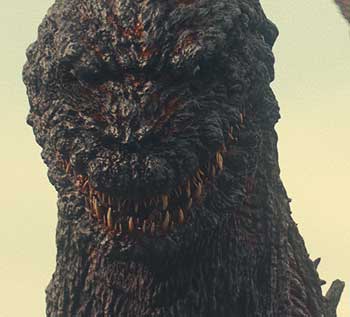 And then rising from the sea as the “4th stage” of mutation – the Real Thing – GODZILLA! Bigger than any Godz before it (scientific hypotheses on how a creature that size could not support its own weight are bandied about – and proven wrong!), at over 380 feet tall, the meanest, most terrifying Godzilla visage ever committed to screen, a truly epic representation! Akira Ifukube’s immortal Godzilla Theme accompanies this version onto land; funnily enough, even though this behemoth sports a bowling pin body and thunder thighs, it is still a terror to behold: scarred black, shark-toothed, a tail twice the length of its torso, flailing, almost with a mind of its own, which we will discover is a correct summation…

A biologist, Hiromi (Mikako Ichikawa), furiously typing and never looking up from her computer the whole movie, identifies the creature’s goal – nuclear energy, as it is undergoing nuclear fission, and heading towards Tokyo for its reactor snacks. The beauty of this daikaiju movie: code-name Godzilla is not fighting other stupid monsters, not saving anyone, not destroying arbitrarily – it’s simply walking to a power source to feed…

This is the first cinematic Godzilla in a motion-capture suit (Mansai Nomura in the sensors), so interaction with its environment is seamless; these are the most convincing flying wrecked cars and trains and boats in any Godz movie. Yet, though CGI is being used, I cannot understand why the head is so inexpressive. Besides a nictitating membrane over his eyes, and his mouth occasionally opening to expel atomic breath, Godzilla could give Keanu Reeves lessons on blank-face.

Movie covers a new social angle – Godz worshippers swarming the streets, chanting, “Godzilla is God!” – and a whole new military ethos, as one soldier laments, “Sorry sir, we couldn’t stop it!” and his commanding officer instructs, “Don’t lose hope! We’re here to protect the people, and that doesn’t always mean take the offensive. Continue evacuations!” I cannot begin to cite the number of times SHIN GODZILLA surprised me with its thoughtful details and storytelling.

There are many callbacks/ Easter Eggs/ tidbits from other Godz films, many actors and music cues as well; SHIN is loaded with legacy and portent, yet is one of those films that ignores every other Godz film (including the 1954 original), making this the first time Godzilla has been sighted. There is backstory of the callously abandoned radioactive garbage in Tokyo Bay, which is used as catalyst for this beast’s mutation. 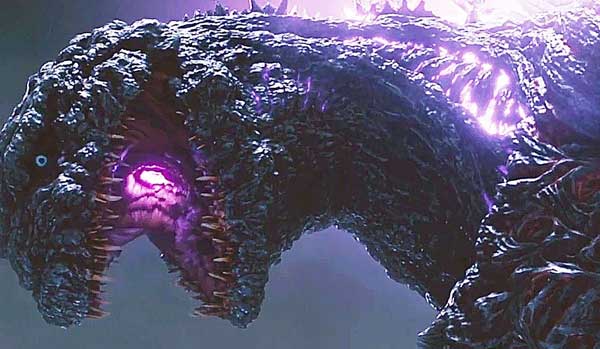 Real planes, real tanks, real helicopters, firing in a judicious manner – from smallest weapons to largest. Even the USA gets in on the action. When there is “no visible damage sustained,” they STOP; they don’t keep firing mindlessly like the old rubber suit days. Swirling visuals from cockpit interiors, the USA drawing blood from Godzilla’s back; angle from the ground as blood from its back falls toward us…

From Godzilla’s petal-like opening jaws – fiery purple atomic breath, the likes of which we’ve never seen, taking out acres of skyscrapers. And then – “Target is emitting photons from dorsal fins!” – its spikes laser upward in every direction, wiping out the fighter jets. It’s awe-inspiring!

The name is interchangeable, as some call it Godzilla, some Gojira; apparently, here, Gojira no longer means “whale-gorilla” but “god incarnate.”

Japan’s prime minister faces a moral dilemma: Should he authorize a nuclear strike from the USA? Painful memories of what the USA once did with malice aforethought (cough–Hiroshima!). And if the decision is made, even then the PM will need a new law to authorize the use of a nuke on Tokyo. “I don’t want to go down in history for this!”

As the countdown to American nuclear intervention tightens, the eventual plan to stop Godzilla is a marvel of ingenious coordination, as trains, planes and cranes are all used to freeze Godzilla where he stands, with a blood coagulant. (Once again, a plot point that was used – in a much dumber way – back in GODZILLA RAIDS AGAIN and GODZILLA VS. SPACE-GODZILLA), The final closeup of Godzilla’s mutating tail, frozen mid-morph, will chill your spine.

SHIN GODZILLA is Toho Company’s greatest comeback. On limited release only in Japan, it won several 2016 Japan Academy Prizes, including Best Picture and Best Director. Unlike the spiffy Legendary Pictures 2014 Hollywood GODZILLA, it truly breathes new atomic-breath life into the legend and legacy.

Lost In Transla-Shin.
There is no literal English translation for SHIN GODZILLA. “GODZILLA RESURGENCE” (which the Japanese filmmakers hate and renounce) is nowhere near the actual translation; the American distributors simply chose the most apt descriptor for a Godzilla reboot.

The SHIN GODZILLA title more correctly means “new Godzilla” or “true Godzilla” (no surprise the American studios couldn’t translate a word that means “authentic”), and “shin” could also mean “evolution,” which certainly describes the condition of this most morphable Godzilla.