Love it. Hate it. You won’t fall asleep.

I mean, really! How sensible do you think a movie called SHOOT ‘EM UP could possibly be? 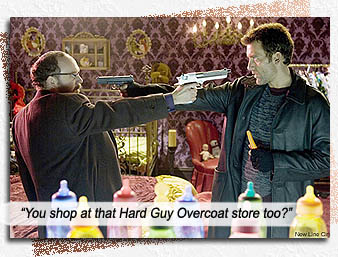 And the hook of this ultra-violent guilty pleasure movie materializes: Owen does most of his killing with that baby in his arms. So it’s not mindless. So it’s not gratuitous.

Writer-director Michael Davis has been watching one too many John Woo movies, especially HARD BOILED (1992), as improbable scenario after improbable scenario comes barreling at Owen; an unending stream of bad guys pursuing the baby for political purposes; we marvel at all the intricate creative ways that Owen Shoots ‘Em Up – blink your eyes and another creative death slips by. With nary a scratch on Owen or his Hard Guy Long Overcoat.

Paul Giamatti is head bad guy – as hard as he’ll ever be. The Hard Guy Long Overcoat helps. Feeling up the naked titty of the baby’s dead mother is a big plus.

Remote control guns on strings, a lactating big-breasted prostitute as surrogate mother (Monica Bellucci), raunchy sex with guns blazing; sliding, spinning, twirling, never-ending dance of destruction; snatching up the baby from the street in a speeding, stolen car; broken hands and using carrots as brain-spikes and trigger-fingers; Motorhead’s Ace of Spades, AC/DC’s A Touch Too Much, Crue’s Kickstart My Heart while parachuting and shooting at each other in freefall.

What the HELL is happening in this movie?